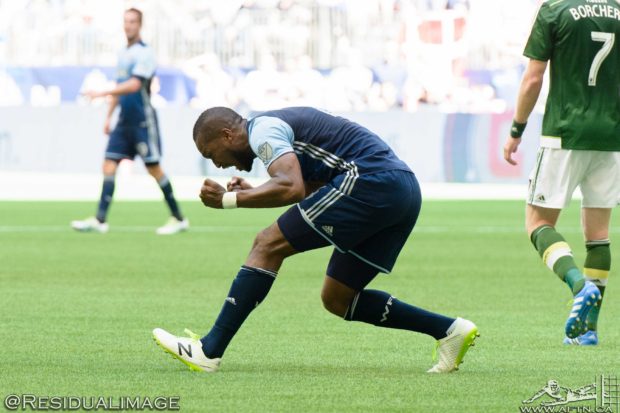 The Whitecaps concluded their adventurous preseason Wednesday night in Portland with a whimper and a whine. After attempting to ramp up the intensity by playing UK based sides in midseason form (which really didn’t result in much of a contest after all), the Whitecaps finished their preseason in Portland and looked equally as flat as last season, concluding with a flattering 2-1 loss to a completely dominant Portland Timbers side who waltzed through the Whitecaps back six with ease.

It was a bit of a bizarre setup to begin your final tune up prior to the Champions League Quarterfinal, as the starting line-up included a backup right back, Jake Nerwinski, a likely second choice Russell Teibert holding beside Matias Laba, and a front four in Erik Hurtado, Marcel de Jong, Giles Barnes, and Alphonso Davies.

Ironically, an argument can be made that a teenage Davies may be the most competent winger currently available, but assuming all players currently signed were healthy, all four may not actually be in Robinson’s starting XI this season.

Christian Bolanos is still struggling with an injury, but it is still puzzling that in the final game prior to what may be the biggest set of matches in the Whitecaps history since joining the MLS, Robinson chose to leave a bright looking Yordy Reyna, a fully fit Kekuta Manneh, and Cristian Techera on the bench.

The team immediately looked better once Sheanon Williams, Andrew Jacobson, Reyna, and Kyle Grieg were subbed on late into the match.

It would be absolutely criminal management on Robinson’s part to not play his absolute best available team next week in the first leg versus New York Red Bulls. The players have not yet played a truly competitive match, and there is a week after the first leg until their second match. The club knew these matches would be coming at the beginning of the year, so any lack of preparation on the part of the players to be able to handle three games in 11 days would look poor on everyone’s part.

And while help is on the horizon with the now officially announced signing of Fredy Montero on loan, and rumours swirling of the Whitecaps wooing Atiba Hutchinson to return, the real key to the Whitecaps season will not rest in the hands of the new additions, but rather in subtracting a negative from last season.

No one around the club, including the players themselves would argue with the fact that many key players from 2015 took huge steps back in 2016.

Techera came into last season’s camp out of shape and looking like he lacked motivation. Kendall Waston was a shell of his previous self, looking even more frustrated and confused as the season wore on, stacking reckless actions on top of poor decisions right up until the last game of the season where he earned himself a suspension which will carry over to the beginning of 2017.

Laba struggled mightily early, and while he improved over the season, he still found himself out of position and appeared to be out of touch too often. Worse for Laba is that he does not appear to be able to develop the tools to be useful in transition or attack, meaning that if he’s off his usual disruptive self, he’s a fairly limited contributor. Even David Ousted looked human after a stellar 2015 season. Not to mention the fact that Manneh was injured in the early season and never returned.

Those five players, when in form, are some of the Whitecaps most important players, and if the Whitecaps expect to put up a fight for, or in, the playoffs, it is an absolute necessity that they provide some consistency throughout the year.

David Ousted can be excused, and he’s shown his excellence enough that one could trust him to return to his place among the top of the league.

Manneh has had his share of injury woes, but he appears fit and healthy and one can hope Manneh can return to terrorizing opponents with his speed and aggressiveness.

Waston has yet to show he can adapt to the league’s enforcement bodies, and is being challenged more by the league’s best attackers at taking the ball to his feet, where he is less comfortable, than in front of him or with the ball in the air. Robinson is likely hoping an increased leadership role in the squad can help Waston see the game with a bigger picture, and in turn, remain more focused on the pitch.

Techera is perhaps the biggest question mark, as he started his tenure with the Whitecaps showing decisiveness and trickery that caught much of the league’s defences off guard. Unfortunately, Techera failed to catch the wind in his sails all of last season and his rather large salary makes you wonder how he fits in with the likes of Davies and Bolanos threatening his spot on the squad.

Laba may be the most critical to the Whitecaps success this season. On his best day, Laba locks down the space in front of the centre backs, forcing the ball to go wide where the Whitecaps defenders are much better suited to deal with long balls and crosses. He lacks the dynamism to truly create chances, but he is able to make an intelligent and simple first pass to move the team forward. And there, with the additions of Montero and Renya, in addition to young sparks in Davies and Manneh, and the Whitecaps could be dangerous once again in transition.

Since it appears that the Whitecaps may have to go at least through the early part of the season without a true midfield general, the hope for supporters will be that Robinson can rely on the ability of once critical contributors to return to their previous strength. If they fail to do so, it may result in Robinson, and even the Front Office staff holding the reigns, to be forced on the hot seat and to answer hard questions about the progress of the team.