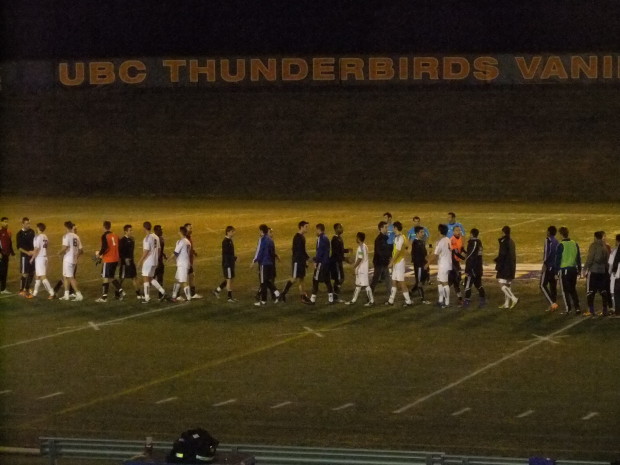 Defending BC Provincial A Cup champions Surrey United Firefighters, became the first team to clinch a place at this year’s Finals Day with a narrow 1-0 win over Vancouver Thunderbirds on Friday night.

The Thunderbirds battled bravely despite going down to ten men in the 41st minute when Niall Cousens saw red for a second bookable offence.

The game saw very few clear cut chances for either side and the deciding goal came from an excellent header from former Whitecap Jeff Clarke in the 51st minute.

Vancouver had the best opportunities in the first half but were unable to break down the Surrey defence.

Harry Lakhan had the first chance of the match for the Thunderbirds, with a shot from the edge of the box in the 4th minute, before Sean Haley drove wide right five minutes later.

It was an enjoyable game with play going from end to end and the home side looking the more dangerous.

Milad Mehrabi headed a bullet cross from Brandon Bonifacio wide left for the Thunderbirds in the 19th minute, but neither side was able to carve out any efforts on target.

It took an old head to finally do that, when Jeff Clarke pounced on a weak header in the box from a Thunderbirds defender on the half hour mark and drove a low shot at the keeper, which Luke O’Shea held at the second attempt.

The whole momentum of the game was to change at the hands of the referee in the 41st minute when Niall Cousens was sent off after picking up a second booking for a late trip on a Surrey player.

Surrey came out for the second half all guns blazing and put the home side under intense pressure from the start.

They got their reward six minutes into the half when Clarke outjumped two Thunderbirds defenders to brilliantly head a Vinnie Stewart cross into the top left hand corner of the net.

Surrey then put Vancouver under the cosh for the next couple of minutes as they pushed to kill the game off.

The Thunderbirds held firm though, recomposed themselves and they had a chance to level in the 54th minute when Haley shot just past the right hand post after some nice build up play on the edge of the box.

Vancouver were being patient in their build up play to try and force the equaliser and Bonifacio brought a save out of Andrew Fink in the Surrey goal just past the hour mark, following more good build up play and some nice footwork from Gagan Dosanjh in the box.

Fink was only able to parry the poked shot but the Surrey defence quickly cleared the danger.

Surrey were looking most dangerous from set pieces and especially the corners that Steve Kindel was whipping in to the box.

Ryan Reynolds forced O’Shea into a point blank save from one midway through the half, after the ball was headed down to him in the six yard box.

With Surrey not looking too dangerous in attack, Vancouver moved to three at the back at times, as they pushed forward to try and tie the game.

This was leaving them open to quick counters and Reynolds was given another chance to kill the tie off in the 77th minute when he was played though but O’Shea stood up strong to block the shot.

Both sides were now finding spaces and the game was starting to move from end to end once again.

Alex Orasa blasted over with eleven minutes remaining after some head tennis in the Surrey box and the Firefighters had a couple of half chances that went over or were deflected for a corner.

The Thunderbirds pushed for the equaliser in the closing minutes, but Surrey weren’t really troubled and the closest the came was when Steve Johnson headed over a Lakhan corner with three minutes remaining.

It was a disappointing end to the home side’s campaign and they will be left wondering what might have been if not for the sending off. They played some nice football in the four games that we saw and certainly have a lot to be proud of and build upon as they get set to undertake another PCSL season before returning to CIS action at UBC in the fall.

Surrey United have now clinched a spot in the A Cup final which will take place on the island on May 11th and they await the winners of Sunday’s other semi final between Comox Valley United of the VISL and West Van FC of the VMSL.

That game takes place at McAdam Park in Duncan with a 3pm kick off.

If you’re on the island and in the vicinity, get along and take in the action.