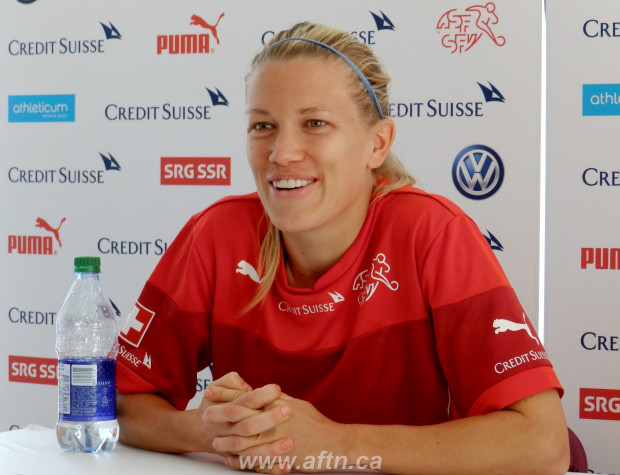 In a few hours time, Vancouver’s BC Place will be packed to the rafters as around 53,000, mostly partisan, fans will watch the Canadian home heroes take on the Swiss misses in Women’s World Cup action.

Have no doubts about it. This is a tough test for Canada and one they would dearly have liked to avoid at this first knockout stage of the tournament. There could be a lot of heartache around the stadium come the final whistle depending what Switzerland side we see on the pitch.

Led by one of the most exciting female players in the world today in Ramona Bachmann, the Swiss can be electric, free-flowing and a goal machine. They scored 53 goals in qualifying and are the second top scorers at this years World Cup with 11 goals. It’s an area that Canada have been struggling in, with a stuttering attack.

Don’t read too much into those stats though says Swiss midfielder Lara Dickenmann.

“We scored ten goals against Ecuador, but it’s not really a reference I think,” Dickenmann told reporters after training on Friday. “We want to score goals against Cameroon or Japan. We’ve scored 11 goals but ten against Ecuador so we’re maybe a little bit in the same situation.

“Although I think we’ve created a lot of chances. We did so against Cameroon. We had a bunch at the end of the Japan game. That’s positive, but we can still improve as well.”

It’s been a frustrating tournament for the Swiss so far.

Heading in to it, they probably didn’t really contemplate a third place finish in the group stage all that seriously. After all, they were playing two lowly ranked teams in Ecuador and Cameroon.

Their opening match in Group C saw them unluckily on the wrong end of a 1-0 scoreline against the defending champs Japan. Switzerland had their chances to win the game, never mind grab a draw, but the goals just wouldn’t come. Still, it was a strong and solid performance that showed that they could be a top team in the tournament.

That was bolstered when they found their shooting boots in a 10-1 demolition of Ecuador in their second match. It was ten going on a lot more too.

But the tournament’s surprise packages of Cameroon shocked the Swiss 2-1 in their final group game, coming back from a goal behind at the half to snatch second place in Group C and set up a Round of 16 match-up for the Swiss with Canada.

It’s led to some tough internal analysis within the Swiss camp, with coach Martina Voss-Tecklenburg very critical of the senior players.

With over 100 caps to her name since making her international debut as a 16-year-old in 2002, Dickenmann is one of those and although she knows herself they let themselves down, she feels the coach was correct to get it all out there and it will only help the squad moving forward.

“The Cameroon game has been analysed and all we can do is now profit from the experience,” Dickenmann said. “We look to leave behind the negative things and take on the positive things into the next game.

“I don’t need the coach to criticise anything. I know myself very well whether we’ve had a good game or if we haven’t performed very well. But she was right to do so. It doesn’t make much sense to talk about a 19-year-old player so it’s the older, more experienced players that must be focused. I can accept criticism and I can cope with it very well.”

Although that may read like a slight dig at Voss-Tecklenburg, nothing could be further from the truth and Dickenmann is a huge fan of the German’s style and approach to management since she took over as national team head coach in 2012.

“First of all it’s her belief in our qualities,” she continued. “What I like most about her is that she’s always there if a player needs to talk to the coach. The door is open in to her room, she’s always available. It’s always a discussion based on a positive way to keep on developing. Unfortunately not all the coaches I’ve had during my career treat players this way.”

Dirty linen aired, the Swiss took some time to relax and unwind before heading back to Vancouver to prepare to take on the hosts. And it’s done them the world of good.

“The past two days have been very important for the team after a part of the tournament that’s been very intense with three games within a short time,” Dickenmann added. “We used the time to slow down a bit and now we can focus on the game to come.”

There’s no doubting that it’s going to be quite the occasion, quite the noise and quite the pressure at BC Place. It’ll be a different kind of pressure for each side and we won’t know how each team will cope and react to it until later.

Switzerland have cut relaxed figures this week upon their return to Vancouver. It’s a city they feel very comfortable in, having first arrived here to prepare for the tournament three weeks ago. It all plays a part in taking the pressure off them a little bit.

“It helps because we feel quite at home here,” Dickenmann said. “We know the stadium. I don’t know if it’s an advantage. It’s not as if we play here all year round. We’ve played two games and one practice in the stadium, but it’s a good feeling that we have here. But I know that Canada was here all year round as well, so they feel at home here too. But it’s good for us that we feel well here.”

That said, feeling comfortable when you have a half full stadium cheering you on, as they were against Japan, will be entirely different to the more hostile pro-Canadian crowd they can expect to run out to today. It still doesn’t faze Dickenmann though.

“Of course there will be 50,000 people against us but it’s very much different from the men’s soccer,” she said. “There’s some difficulties ahead, like communication on the pitch within a huge stadium with a loud atmosphere. But we’ve spoken about that. We found solutions and all we want to do is focus 100% on the game and it’s much more important to focus on Canada’s team, not on the Canadian crowd.”

The Canadian girls have already had the experience of playing in front of a huge home crowd (53,058 to be exact) in their tournament opener against China in Edmonton. For the Swiss girls, this is likely to be the biggest crowd most, if not all, of them have ever played in front of.

It’s all so very different from when the two teams last met at the Cyprus Cup in 2013 when 50 fans were listed as the attendance.

Dickenmann has come close, playing in front of 50,212 fans as Lyon lifted the 2011/12 Champions League trophy in Munich, although she doesn’t feel you can really compare the two experiences.

“The stadium was very different,” she explained. “It was open and there was an athletic track around the pitch. It’s going to be very different. This stadium is much nicer, and much newer and close.”

The crowd and the occasion will certainly be a highlight in many of the player’s careers on both sides, but for Dickenmann, it only counts if the result is right at the end of it all.

“It’s one more highlight but the highlight is not playing in front of a huge attendance,” she said. “Really, a true highlight would be if we beat Canada because in football all that counts is winning games and not big stadiums and sold out games.”

Switzerland have never beaten Canada and this world stage would certainly be an ideal place to break that stat.

But the match sets out something of a quandary for the Swiss tactically.

Do they want to show their attacking prowess early, getting on the scoresheet fast and forcing Canada to chase the game, ramping up the pressure on them even more?

Or do they sit tight defensively, expecting Canada to come with the early pressure, then playing on the anxiety of the Canadian players and crowd when the breakthrough doesn’t come? Playing a Vancouver Whitecaps road counter-attacking style.

But grabbing that early goal would certainly turn the pressure cooker situation for Canada up a notch or two.

“It puts more pressure on any kind of team,” Dickenmann admitted. “We saw that coming out at half-time against Cameroon. They scored two minutes after and that was a lot of pressure for us. It can change the energy of the game. I don’t know what our tactics are going to be yet, but obviously scoring a goal early is always good.”

Whatever tactics the Swiss bring, the important thing for Dickenmann is that Switzerland just focus on themselves and what they do, and not so much on what Canada may or may not produce on the day.

“Maybe in the past three games, well maybe against Cameroon and Japan, we have focussed a little bit too much on the opponent, so we also want to focus on ourselves a little bit more from now on.”

The Swiss certainly have a real chance at pulling off the big upset as far as we’re concerned. In fact, cards on the table right now, I think they will.

But for all their relaxed frame of mind heading in to the game, Dickenmann and the Swiss are expecting a very physical match against the Canadians.

“They’re very solid,” Dickenmann said of what she feels Canada brings to the table. “Physically, they’re in a very good shape. They bring a lot of energy to the pitch. A lot of screaming and positive energy in the team, from the bench as well, so that can be a distraction for us.

Will it be enough to see off the Swiss challenge come full time this evening? A nation awaits.