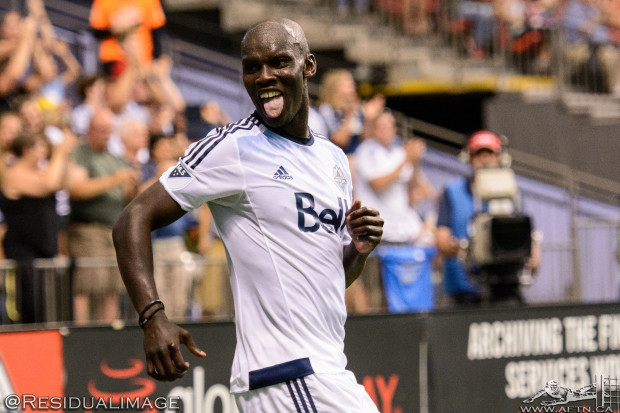 Amid all the Re-Entry frenzy (well, two people on Twitter seemed excited), Vancouver Whitecaps announced on Friday that veteran defender Pa-Modou Kah has re-signed a one year contract extension for the upcoming season.

So let’s take a look at The Good, The Average and The Bad of that extension.

With the emergence of Tim Parker late last season as a full-time MLS starter, this move was easier for the team to sign off on. With the injuries that seem to hit every team every season (and the ‘Caps have certainly had a lot over the years in the centre back position), the need for a quality veteran backup is so valuable for every team.

Even though he is getting up there in age (he’ll turn 36 midway through the 2016 season), I would be comfortable seeing Kah play a good 8-15 games in all competitions next season. Just enough games to help out Kendall Waston and Parker next season, and cover for the suspensions that are bound to come!

His leadership qualities could have been ‘The Good’ part for this article. It was a coin toss and the order to put these two.

With Parker and Christian Dean in the center back mix, the leadership Kah brings to these players is so valuable. From training, to game day, to the interaction between these players off the pitch, he can teach his fellow players so much.

You can’t put a price on leadership, and in a salary cap world you have to be able to get quality minutes and the leadership for the cheapest price you can.

Can He Handle Another MLS Season?

Last season Kah missed a lot of time due to injuries. There were many factors that led to this: too many games out of the start gate for Kah, unlucky challenges during games and just the travel that Vancouver has over a whole season.

Being named a starter at the end of preseason this year was a surprise to many. Most people expected him to be a backup. All the games out of the gate might have hindered his health for the season. Might it have been too much too soon for his body?

With Parker already being pencilled in as the starter for 2016, this may be the best for Kah this season. As long as he stays healthy, this is a really good signing for the Whitecaps this upcoming season.