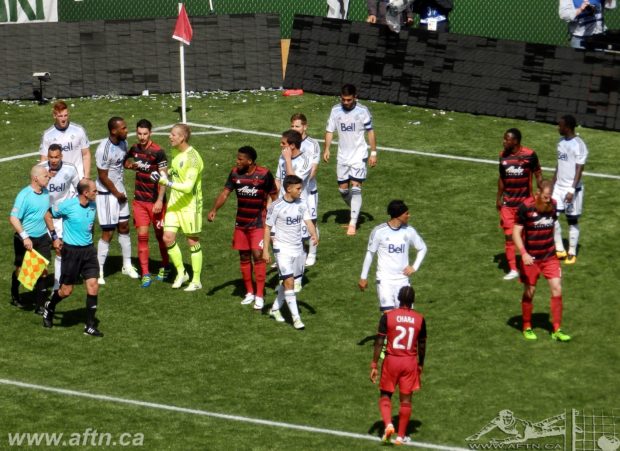 Well that was a shit show to say the least. A game with a little bit of everything but a whole bunch of garbage.

From the disgusting penalty by Pa-Modou Kah in the 4th minute that got the Timbers on the board early, to the 90+4 minute red card to Kendall Waston to end the game. This was a game that will leave the Whitecaps supporters frustrated and might be the final straw for a good number of them.

Carl Robinson made the call on his starting XI to put Tim Parker in at right back over the struggling Jordan Smith and put Kah into the centre back role. It was a decision that came back to bite him in the ass. With Kah you expect a mistake or two but you hope that these mistakes don’t hurt the team. It wasn’t the case this game.

Let’s take a quick look at “The Good, The Average and The Bad: Garbage Effort, Garbage Calls and Garbage Overall Game Edition”, so we can put it behind us and move on to the next game….

Let’s be honest, there was nothing good to take from this game.

Still Nothing At All

There was nothing average from the Whitecaps today.

The Whole – Start To Finish

It was a game to forget from start to finish. So many things to discuss, so little time I want to waste talking about it.

First things first. Kah was horrible. Sure Robbo said Kah put his hand up in the locker room after the game and took the blame. That is a nice gesture but it doesn’t change a damn thing.

The first Timbers goal was just brutal form from Kah. From the silly gaffe to the slow speed on the chase of the ball to the stupid penalty it was something that was so bad it looked like a Three Stooges gag.

On the second goal, Kah didn’t even try on the cross into the box, he didn’t make an effort at all to block the cross. If he would have gotten to it or not, make an effort just in case.

On the second penalty kick I will give that to Kah, there is no way that ball hit his hand. It didn’t even hit his arm. It got him in the chest.

Secondly, Ted Unkel gave the Whitecaps such a brutal make-up call from screwing up the Kah non-handball that Robbo told the fourth official exactly why they got the call. We all know the lack of consistency from the PRO Referees is the worst part of MLS, but it is getting ridiculous. This game was Unkel’s seventh game of the season and he has given out seven penalty kicks.

Third, why did Waston get a straight red card? Just because a tackle is a hard tackle doesn’t mean it is a dangerous play. These are grown men playing a physical game. Yes, they roll around and act like they have been shot half the time when they get tapped.

I know it will never happen but I would love to see Robinson to call out the officials for the bullshit calls after the game. He will get fined, but in my eyes it would be well worth it. Having the same blah blah blah answers after the game is getting old. It is making him sound like a broken record. Stand up in front of the reporters on camera after the game and tell everyone watching how you really feel. Show your players that you know this inconsistent quality of refereeing is not going to cut it. It could be that moment during the season that can be a turning point.