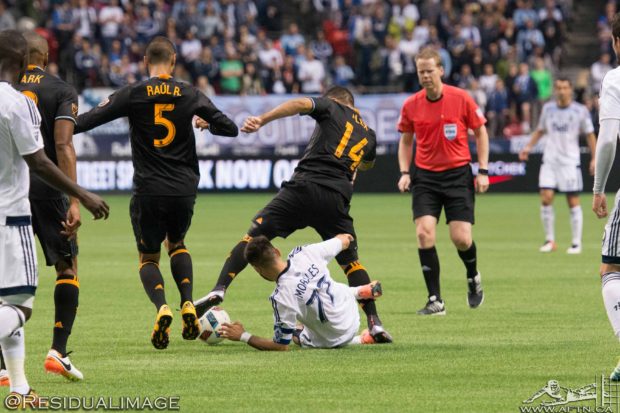 Two games in six days and five points dropped to two of the worst teams in the MLS Western Conference. Not the high point going into a three week early summer MLS break that both the coaching staff and the players want to be on.

With the two leg affair against NASL side Ottawa Fury in front of this team, it is a perfect time for a much needed break from the fun of MLS this season with the inconsistent refereeing and the lacklustre efforts this team has given.

So before we can enjoy this little mini PRO Referee vacation that we all need, let’s take a look at “The Good, The Average and The Bad: Houston This Game Was Boring Edition”…

This season has had a little bit of everything and a lot of red cards and supplementary discipline. It has been comical at times and has angered a high percentage of Whitecaps supporters.

This game was no different: a yellow card to Russell Teibert for his shoelaces tripping a player, a red card to Pedro Morales after he was knocked over twice and hit in the face, and a non-penalty called when Octavio Rivero’s arm was grabbed with two hands by the Dynamo defender.

It is a continued failing grade shown by the Professional Referee Organization and something that will continue driving casual fans away from spending money on the product that is Major League Soccer.

People who spend their hard earned money to support this team and the league are getting frustrated, even the most loyal of supporters are starting to make their opinions public on a regular basis.

This three week break in MLS action couldn’t have come at a better time. It gives all parties involved a chance to step back, calm down that anger, and recharge for the second half of the season.

With the first leg against Ottawa Fury coming up this Wednesday it is time for the fans of this team to have fun again supporting.

It was a game of balls over the top and hope something happens in the team’s favour gameplan. Or as we called it in 2012 Rennie-ball. This team isn’t built to play that style. It is built to go through the spine of the team and use the speed it has down the wings in the final third of the pitch.

With Kekuta Manneh coming off two of his best efforts this season against Toronto FC and Portland Timbers, it seemed like this game they forgot about him because Octavio Rivero was back in the starting XI. I know Rivero is a big money player for this team, but why go away from something that is working?

With the season almost at the halfway point they need to start gelling game in, game out, with a settled starting line-up, and build from there.

Erik Hurtado in the 79th minute and Nicolas Mezquida and Kianz Froese in the 90th minute – WTF was Robbo thinking?

As soon as Pedro Morales was sent off in the 42nd minute, Mezquida should have been subbed on to start the second half. Mezquida has been great in that centre attacking midfield role and he has great chemistry with Rivero and Techera. With how much Techera was struggling he could also have subbed him out and they wouldn’t have missed anything offensively.

Octavio Rivero was gassed in the 80th minute. He wasn’t attacking the ball when it was in the Dynamo end and he had no speed to make any decent runs down the middle of the pitch. Coming off his first start in weeks he still didn’t look fully fit from his ankle injury. Why not give Froese a decent 10-15 minute run at tired Dynamo defenders?

This isn’t the only game this season where we have called Robinson’s substitutions into question. Sure it is up to the players to win or lose the game, but they need to be given the most of their opportunities and put in the best position to succeed by their gaffer.