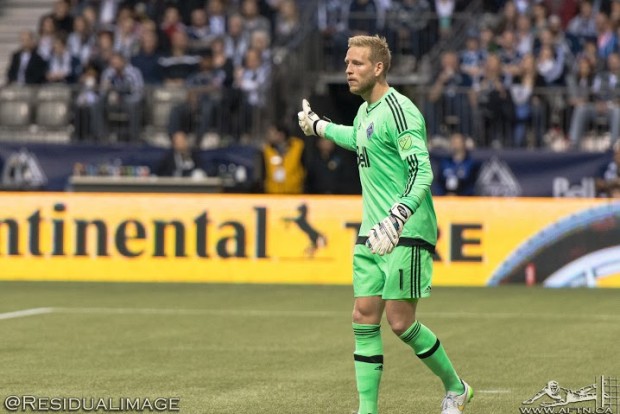 You can almost taste the saltiness in RSL’s whiny tears after Vancouver Whitecaps headed to Sandy, Utah and for the first time ever, they left with three points.

It was a controlled performance from the ‘Caps, who showed a different tactical side to them and came away with a deserved 1-0 victory thanks to Darren Mattocks’ headed winner ten minutes from time.

Aaron Campbell brings you his latest “The Good, The Average and The Bad” and his view of what shone and what didn’t in the match.

David Ousted Gets Another Clean Sheet

They were all excellent but I picked Ousted because he has been solid all season and he continued his dominant performance and got his third clean sheet in four games on the road this season.

With all the road woes this team has had since joining MLS, this season’s road success is critical. These points could mean the difference between fighting for the last playoff spot in the last game at the end of the season again to sitting comfortably in the second or third spot in the standings and getting a home playoff date. Maybe even more.

Ousted made four saves. They weren’t amazing saves but he always seems to do just enough to make sure that the team in front of him has that chance to win. Yeah they wait until the last minutes and it’s not always pretty, but an ugly win is worth just as much in the standings as a pretty win.

That is all you can ask from your starting keeper.

Of course there will be times this season where Rivero has these type of games, but even though he isn’t scoring he is still contributing to the team with all the other aspects of his game. He is holding the ball up well, still making dangerous runs in the box and always showing hustle on the pitch. This is something we haven’t seen with the other strikers Vancouver has and have had since joining MLS.

Even though he hasn’t gotten the service he has wanted the last two games he is still making those runs off the defender’s shoulders time and time again. It’s not his fault that his teammates aren’t giving him the ball on his run.

He showed frustration a few times in this game when Darren Mattocks or Sam Adekugbe had their heads down and didn’t see him making a run into the box, missing the chance to make the pass. Even with all these missed opportunities he is still trying and running his heart out for this team.

The Whitecaps improve to 5W-0L-1D with Adekugbe in the starting line up this season. He has shown he has the ability to get up into the play down the flank and get involved in the offense. This game was no different for the young player.

The problem in this game was he looked rushed on all his crosses. He didn’t take his time to make sure he got a decent serviceable ball into the box. Time after time the RSL defenders were stepping in and knocking the ball out before it could make in anywhere close to a Whitecaps player. With this only being his 11th MLS game he is still learning and will only get better with time.

He also turned the ball over a few too many times for my liking. He seemed to play every ball a few yards too far ahead or too far behind the player he was looking for. He needs to play the ball through his midfield more. He kept trying to go over the top and down the wing straight to Rivero and Mattocks. When you have players like Laba, Russell Teibert and Gershon Koffie to play through, that is usually the best option.