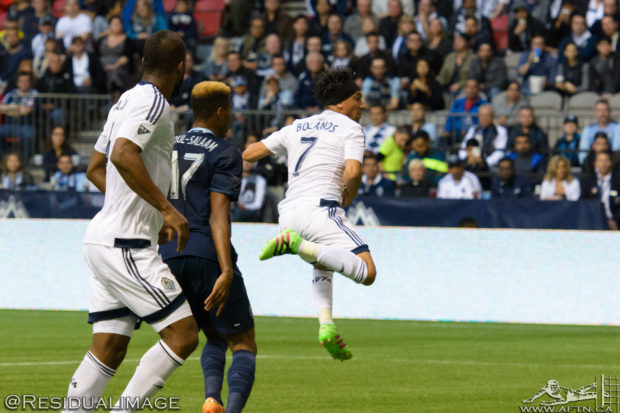 Well that was a tale of two, well, games…

The game started off with a bang. It had great pace by both teams, with goalmouth action, strong physical play, and end to end chances. After a great left-footed goal by Christian Bolaños off a Cristian Techera corner, it looked like that might be enough to get the three points and allow the Whitecaps to enjoy a nice flight to New York City. But a goal by Diego Rubio for Sporting KC, on a play where Kendall Waston was caught napping, the air seemed to be taken out of the crowd at BC Place and the action soon followed.

Waston getting his second yellow card six minutes into the second half, on a bad pass back from Tim Parker, seemed to deflate Sporting KC’s offensive game plan. Both teams seemed to sit back and try to get calls from the referee hoping to get a free kick for a chance to win. It didn’t happen.

With that in mind, let’s take a look at The Good, The Average & The Bad: R.I.P. to ‘Caps & SKC Excitement Edition….

It looked like the Teibert of 2012. He was a buzzsaw all over the pitch. Making crisp passes up the field, tracking back and helping out his defenders, and not giving up when he was beat. All we needed were some crosses into the box to Kenny Miller and Camilo and 2012 would have been in full effect.

With the defensive midfield depth ahead of him in the shapes of Matias Laba and Andrew Jacobson, and players like Deybi Flores, Kianz Froese and Ben McKendry nipping at his heels, this might be the make or break season for the young Canadian.

Once appointed the future captain of this team by coach Carl Robinson, Teibert has been hampered by both injuries and not so quality play on the pitch these past 15 months.

All we can ask moving forward is he continues this quality of play on the pitch and make the most of his minutes.

It was a world class left footed strike off the corner that got the crowd into the game and got the buzz in the air. After that Bolaños was like David Blaine with a really big headband. Poof, and he had vanished from the game. Yes you can say his teammates didn’t get him the ball and play didn’t move up the pitch through him. He could have still gotten involved by tracking back better and helping his defenders. Sometimes you need to go get the ball and make a play, and not use the ball not coming to you as an excuse.

It hasn’t been a great first season so far Bolaños, but this is a game he can work off of and keeping scoring goals for this team moving forward.

You know it was a badly refereed game when Whitecaps colour man David Norman is pissed on twitter.

It was another game with inconsistent calls all over the pitch. A soft yellow on Waston in the first half leads to his ejection in the second. Dwyer then comes on and studs Tim Parker’s leg almost immediately, draws blood and does not even get a card at all. At times I thought Robinson was going to blow a gasket on the sidelines. He was all over the fourth official all game long for calls he thought his players deserved.

Sporting KC coach Peter Vermes was the same type of pissed off that Robinson was. Both teams got no calls but also got calls that should have gone to the other team. Octavio Rivero was trying for a spot on the Canadian Olympic diving team with his flops all over the pitch. He should have gotten a yellow card when he tried to draw a penalty with a flop in the box.

Don Garber said he expects MLS to be a world class league by 2020, with this inconsistent refereeing by PRO Referees there is no way this will happen.