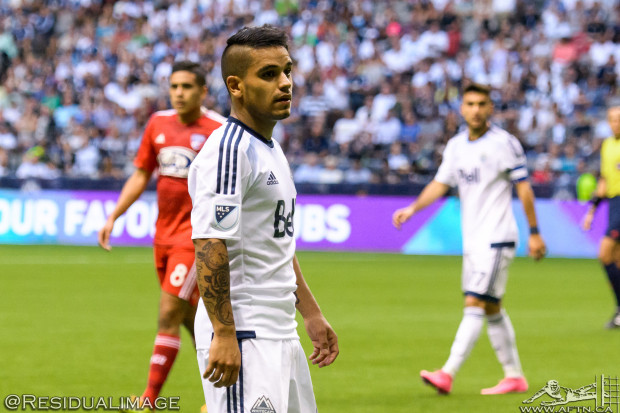 It wasn’t the prettiest of wins that they’ve had in BC Place but this late in the long and gruelling MLS season, every team in the league will take a full three points anyway they can get them. Why should Vancouver be any different?

After two late game, two goal collapses against the Montreal Impact and Sporting KC, the Whitecaps were finally able to play a full 90 minutes and send the faithful Whitecaps supporters home happy.

Let’s take a look at The Good, The Average and The Bad: Techera Does In Dallas Edition.

Wing play of Manneh and Techera

Kekuta Manneh has been on fire the past five games in MLS play. He has really come into his own, transitioning from an up top striker to one of the most feared wingers in the league. He has been more aware of the play around him on his second and third gear runs at defenders in the box. This has allowed him to set up his teammates on the pitch, making him a even more dangerous offensive threat.

Cristian Techera has been another of a long list of great pick ups by Carl Robinson since he took over the top job of managing the Whitecaps. For Techera it seems like it doesn’t matter if he is playing next to Pedro Morales, Mauro Rosales or Nico Mezquida in the center of the pitch, he is able to utilize his speed and make great runs down the wing and into the middle.

This game was no different when he made a great run into the six yard box and was able to back heel a Manneh pass to score the game winning goal and secure the three points that temporarily put the Whitecaps on the top of the Supporters’ Shield standings.

Any player coming back from a seven week injury will take time to get back into game shape. But when that player is your captain, leader and highest paid player like Pedro Morales, people’s expectations are higher than most.

Mezquida has filled in nicely for Morales over this stretch, but sooner or later, Morales has to start. In a salary cap league you can’t have a $1.4 million dollar Designated Player coming off the bench every week. And now that it was announced the Morales has re-signed two more years, he will need to be even better then he has the previous two seasons.

There are a lot of excuses that the team can use when explaining why the players always seem to cramp up late in games. Too many games in a short period of time, the hot field conditions on the pitch or too much travel is wearing the players down. It seems like after the 80th minute there are always a few players that this problems seems to be affecting.

The main concern around it stems from the fact that Robinson likes the use his subs early in the game. So if a player cramps up late in the game, there’s a real risk that the team could be down a man late in the game and at a huge disadvantage. It could also make Robinson question himself on making his last sub say in the 75th minute when he knows he may need to save it just in case a players needs a late game sub due to cramping.

This cramping issue hasn’t hurt them yet but with how tight the Western Conference is, they don’t want this issue costing them points in the standings.