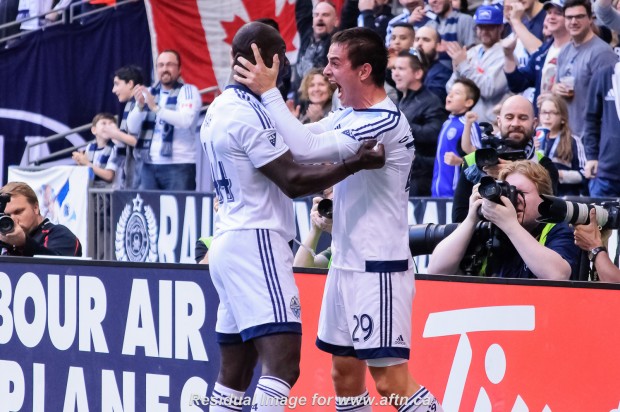 Who saw that coming? Seriously, who? It was a game of missed chances, TFC making great second half adjustments and the Whitecaps following last year’s script.

There were a few bright spots: Octavio Rivero showing off his skillset and Matias Laba and Russell Teibert playing well off one another in the first half. When Carl Robinson watches the tape he will see things that the team will have to work on.

Even though they lost 3-1 to the mighty spending TFC, the score could have easily been in the Whitecaps favour with a few easy chances put away in the first half.

Let’s take a look at “The Good, The Average and The Bad” from the match.

Ok, let’s get this out of the way first. The miss was bad. It was really bad. Mattocks could bury that. I think Jarju could have scored on that chance.

Other than that Rivero played a great game.

His first and second touch on the great pass from Pa-Modou Kah was world class and he showed that he can be that player who is tall, fast and strong enough to play those over the top balls and have the skill to bury the chances.

He was able to use his height and pace to separate himself from defenders and create the best chances of the game. Once he gets his touches and his pace correct, and gets used to turf pitches, he looks like he will be a player that will be hard for defenders to deal with.

Before any comments on this story……YES THE MISS WAS BAD……

The play of Pedro Morales

He had some amazing passes all over the pitch. Great 60 yard cross pitch bombs on a dime to Kekuta Manneh. Great played through balls to Rivero in the first half.

The second half was a completely different story. He looked like he took a niggle on one of the hard tackles from Micheal Bradley in the first half. His shots were all over the place except for on the goal. He missed easy passes and his pace was brutal at best.

Thank god its only game one and he has plenty of games to redeem himself and show the home town supporters his great play from last season.

It was a comedy of errors on the Findley goal. First, Steven Beitashour gets beat by two steps on the wing to give TFC the easy cross. This was a problem last season and this preseason for Beitashour. He looks like he is just a little too slow on his first step backwards to get to the winger.

Secondly, Kendall Waston and Pa-Modou Kah didn’t run fast enough to get into the defensive six yard box. They could have easily knocked that ball into the stands and get rid of the danger.

And last, but not least, Jordan Harvey was so busy looking at the assistant referee calling an offside that Findley easily walked around him and made his way to the front of the net. Harvey has to realize by now that him calling for the offside not convince the official to change his mind if he says different.

He has to make sure offside call or not, don’t let the opposing team ever get ahead of you and get to the front of the goal that easily.

All four defenders can be blamed on that goal. It’s time to move on to the next game and make sure they don’t give those easy goals up moving forward.