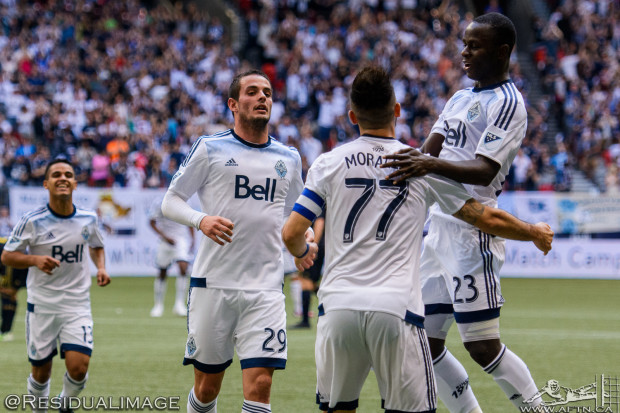 A 3-0 win over Philly. All good? Not quite. Aaron brings you his latest “The Good, The Average and The Bad” from the game.

So that is what it is like to see the Whitecaps not play down to their opponent. Time and time again this season, and in past seasons, the ‘Caps have struggled against teams in poor form. How many points have they lost in the past 12 months by not beating the likes of Chivas, Chicago and Montreal in MLS?

The way the Union are playing this season there was no reason why the Whitecaps shouldn’t have easily won this game. But many of us likely had that sinking feeling in the pit of our stomachs that if we saw a draw it wouldn’t have been a surprise. It would have been a disappointment but not a surprise.

For a team tied for 1st overall in MLS it was interesting that they had never scored more then two goals in a game this season. With Carl Robinson saying that he wanted 60-65 goals this season, with the rate they are scoring they are way off the pace.

Let’s hope they can build off this game and find the back of the net with ease against FC Edmonton and Seattle in the next week.

There weren’t many bad or average spots in a 3-0 win, but Manneh’s lack of offense is a little concerning. Where are the great runs at defenders that we have seen at times this season?

He had a few decent runs but wasn’t able to get the ball into the box to create chances. With players like Froese, Mattocks and Techera waiting on the bench he will need to step up and show he deserves to start for this club.

Should have scored more goals

Yes it was great that they scored three goals, but they could have put five or six up on the Union. Mattocks could have had another goal but he decided to be cheeky and chip it over the keeper, just missing the far post and crossbar. He was wide open and could have ran up to the keeper and easily side footed it home.

Rivero and Morales each could have had two goals this game. Easy misses have plagued both these players this season. It was good they got on the scoresheet but they still don’t bury all their easy chances.

With FC Edmonton on Wednesday there is no reason why this team can’t put four or five goals up on score sheet.