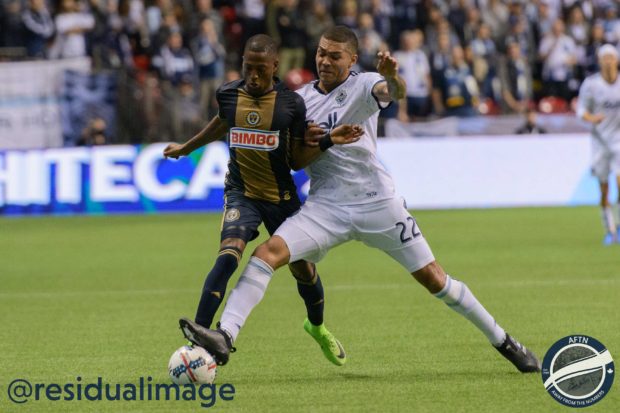 The season kicked off with the bang at BC Place. But that was Thursday night. The MLS First Kick really wasn’t a bang, it was more like a whimper, and a lot of people barely stayed awake during the game. Those pyjamas strips don’t help.

With Kendall Waston suspended for the game due his buffoonery play against Fanendo Adi last season in the final game versus Portland, the often injured but finally healthy Christian Dean was given a chance to start and he ran with his opportunity. He was solid all game long and didn’t look out of place at all.

Alphonso Davies continued his great play to start this season. He was pushed around during the game, we can expect to see a lot of that this season, but just got up and didn’t bitch whine and complain to the referee.

There weren’t too many bright spots, but it was still a point that may be needed to make the playoffs at the end of the season.

Before I get into too much detail about the game, let’s take a look at The Good, The Average and The Bad from the scoreless draw at home to Philadelphia Union.

With Kendall Waston on the sideline due to suspension, this might be a recurring story this season. Christian Dean was given a chance by Carl Robinson and he stepped up and played a heck of a game. He didn’t look out of place at all on the pitch and was just physical enough in the box. He didn’t cross that line that Waston seems to do a few times a game.

Dean had game-highs in clearances (8) and interceptions (5) in the game (thanks to Farhan Devji for those stats) and was named ‘Man Of The Match’ by the supporters on Twitter.

With Waston likely missing games this season due to yellow cards, red cards, and being called up to the Costa Rica national team there will be plenty of chances for Dean this season to continue to improve on this outing. That’s only if he stays healthy though.

He said he’s coming in this season gunning for Waston’s spot. It’s going to be a good battle.

A lot of effort, but very little final execution.

Over the top passes down the pitch do not work for the Whitecaps. It was a move that Martin Rennie tried time and time again back in the day. It was the biggest reason why Alain Rochat was moved on to DC United because his game didn’t fit Rennie’s game style.

With speedsters like Kekuta Manneh and Alphonso Davies on the wings the balls need to go through there and along the pitch. They need to be able to run at defenders and create chances in the middle of the box. This will wear down defenders during the game and once the defenders get tired, it will be time for this team to strike.

Once Christian Bolaños (weeks) and Yordy Reyna (months) get fit there will be plenty of options for Carl Robinson and this team has the potential to be scoring on all cylinders.

No Push From Middle Of The Field

With Christian Bolaños not quite 100%, the Whitecaps started with a 4-4-2 formation and didn’t really have that specific number 10 on the pitch to command the ball from Matias Laba and Andrew Jacobson and move the ball up the middle of the pitch. Way too many times the ball was lumped up over top and Erik Hurtado had to put his back to the Union defenders and try to come down with it. Those over the top balls did not lead to many chances.

The chances that were created came by going down the wing and down the middle of the pitch, going through Kekuta Manneh, Alphonso Davies, and sometimes Cristian Techera.

With Nicolas Mezquida coming off a preseason injury, he was only able to get a 15 minute run at the end of them game. This could be a make or break season for Mezquida to solidify him with a starting position and a regular starter for this team. To that we need to see more from him, and of him.

You also have to wonder if Marco Bustos will ever get a chance other than in the Canadian Championship.