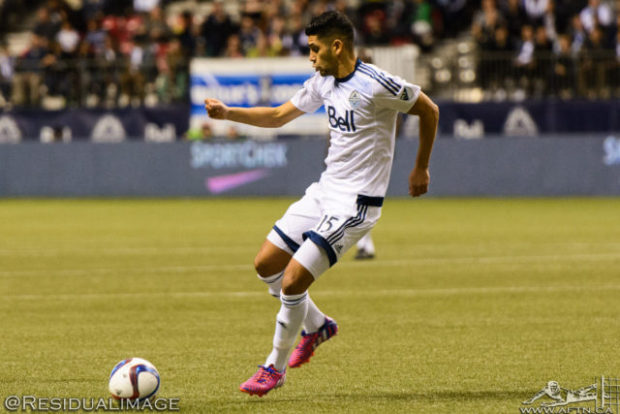 The table-topping Vancouver Whitecaps headed to San Jose but apparently forgot to bring their Earthquakes preparedness kits with them, instead turning in a lacklustre performance on the way to a flat 1-0 defeat.

Was hard to pick out too many plusses from the game, never mind a ‘Man of the Match’, but Aaron tries and brings you his latest “The Good, The Average and The Bad”.

Starting to sound like a broken record with the praise of Matias Laba. Was so dominant on all his challenges and tackles in the first half. Time and time again he was the one Whitecaps player that disrupted the offensive play by the San Jose forwards and got the turnover so the Whitecaps players could start a transition the other way.

He had been playing at such a high level all season that the other teams and media in MLS are taking notice. If he keeps this up he may be sold this off season for a tidy profit.

Struggled a bit offensively, but was pretty good defensively.

Offensively the ball got caught in his feet way too many times. Had some good runs into the box but made one or two many moves and wasn’t able to pull the trigger on a shot on goal. Needed to build off his performance from the Columbus Crew game and I don’t feel like he did.

Defensively he showed great hustle all game long. Made runs back time after time to make sure he was in proper defensive position on the pitch. Usually this is the weaker part of his game.

This was not a dirty game. Wasn’t even close to being a dirty game that could get out of hand. By handing out a yellow card to Darren Mattocks in the third minute, everything after that he had to card for the sake of consistency. If he had kept the card in his pocket and gave Mattocks a stern warning then he wouldn’t have had to bring out all the cards he did during the game.

On the Morales/Jahn incident, they both deserved yellow cards and that’s it. There was no need to give straight reds to both players. Nothing was done by either player to intentionally hurt the other. Morales got kicked in the shin and Jahn got yelled at while he was on the ground, all after tried to kick the ball when he didn’t know the play was dead.

Jurisevic made a big deal out of something that happens every game and most of the time yellow cards aren’t even given out by MLS referees.

Kendall Waston’s yellow card at the end of the game was another one where you can’t fault Waston on it. He jumped up for the ball and made so little contact that if the Earthquake defender just played in nothing would have been called. This is a card where Waston might be targeted because he is so strong and no one can come close to him in the air.

I hope the Morales and Jahn’s red cards are rescinded to yellow cards by the MLS disciplinary committee this week. By why have faith in the MLS just to have to ask more and more questions when they don’t do it?