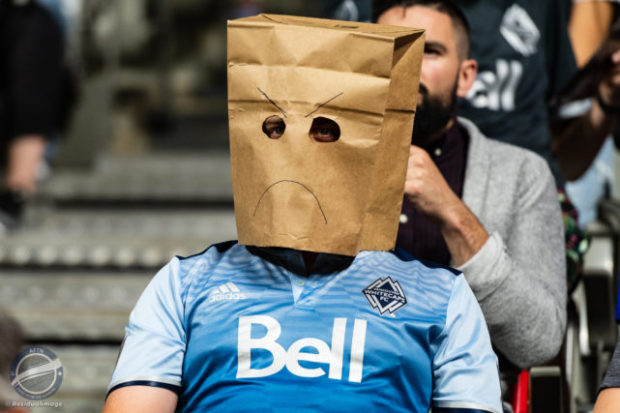 I don’t know what the music choice was in Vancouver Whitecaps’ dressing room after Wednesday night’s loss to Cavalry FC but Chopin’s classic “Funeral March” wouldn’t have felt out of place. They probably stuck with New Kids On The Block coupled with Blur’s “This Is A Low”.

Those two would have been the perfect combo as one of Canada’s very own new kids on the footballing block handed the Whitecaps their biggest low in their MLS era.

As much as Wednesday’s match was a richly deserved historic moment for the Calgary side and the CPL, it was an embarrassment for the Whitecaps and really shows just how low the team have sunk this season.

Forget being rooted to the foot of the MLS Western Conference, they lost to a team that’s combined salary is likely less than that of Ali Adnan’s for the season.

They mustered three shots on target in a must-win game they were trailing in from the 7th minute. At home, to lower league opposition, that never looked in any trouble from the first whistle to the last. A team who got their gameplan spot on and executed it to perfection.

There were a lot of telling quotes after the match from both sides (you can read some of them HERE), but for me, there’s two that really sum up how things became so derailed for the Whitecaps in this one, and they both come down to where the ‘Caps are mentally and confidence-wise right now.

Canadian international Nik Ledgerwood felt that “the biggest difference between both teams tonight was that every player on our team believed that we could win the game, and I don’t think that was the case on the Whitecaps.”

Damning, and hard to argue with. The ‘Caps looked beat as soon as Jordan Brown’s 7th minute goal went in. They may have huffed and puffed and won the possession battle after that, but, as in the first leg, they were firing blanks and mostly clueless in the final third.

Now you can put some of that down to Cavalry’s defending, let’s give credit where credit is due, but it’s a familiar tale as, Marc Dos Santos noted himself after the match.

“It was a night that I feel we could have stayed there another two hours and it would have been difficult to score,” Dos Santos mused after the game. “We were the better team on the field, more possession, more in their half, pushed, created. But we missed some empty goals that are almost more difficult to miss than to score, and when those ball don’t go your way it’s like everything is piling on, and it becomes difficult.

“There’s a lack right now of quality in our last third, and if we don’t score enough goals, our defence has to be perfect, and as soon as we concede one goal it’s like a mountain for us right now.”

It’s a mountain where the Whitecaps have lost touch with the base camp and have now fallen off a precipice. Whether their rope holds or the plummet continues is now what the next few months will give us some indication of. 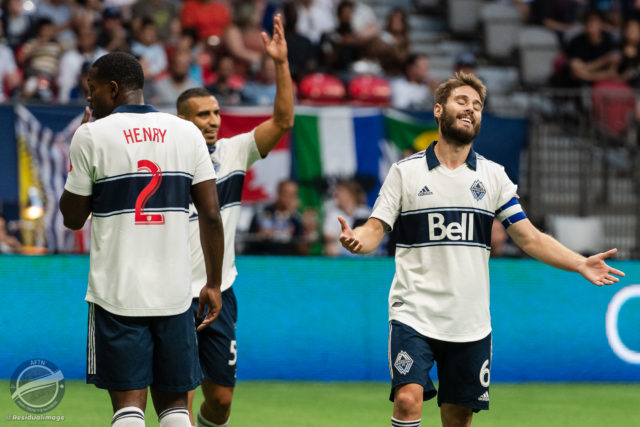 We’ve talked ad nauseum about where the Whitecaps woes lie, as have so many others, so we won’t dwell on those too much again right now. They’re pretty obvious – the midfield can’t create and often resembles a gaping hole, the attack can’t score or seemingly penetrate the final third, and the defence can no longer hold out under the intense pressure they constantly find themselves in. Marking and tracking throughout the team is almost non-existent and the players Dos Santos currently finds himself with either don’t understand or aren’t capable of executing his desired gameplan.

The Whitecaps are clearly lacking something and listening to Dos Santos recently you’re not left in any doubt as to what and just how much – depth, quality, belief, confidence, toughness. And that’s just for starters.

There appears to be a clear disconnect among certain players on the team, many of whom are simply not playing to their levels or living up to their billing. It’s an absolute mess. One that is certainly partly of Dos Santos’ own making as he brought the players in, but there are a number of other factors at play here.

Now winless in ten, other teams know that if the Whitecaps go behind or face adversity, right now, they’re not coming back. Cavalry knew that and targeted getting that early goal to shatter the ‘Caps confidence and get the fans on their backs. And it worked to perfection. The trouble now for the ‘Caps is that every other team will try to do the same and it’s very hard to see where this next win will come from.

So how does Dos Santos get them out of that mindset, that situation? Can he this season?

“We’re not alone, especially in MLS,” Dos Santos noted. “There’s other clubs that are in this situation and it’s not easy. There’s a couple of things we can try to do to get a reaction, also in the locker room. Maybe new blood. Maybe at this point some moves if we’re able to.

That talk about making moves now, in this summer transfer window, marks a different tone to what has recently been said, sometimes inbetween the lines if not directly. Dos Santos has always talked about not making “lateral” moves, and indications were not to expect much movement in this window. Now, it would appear he’s reached the end of his tether with certain aspects of his squad and he needs to have fresh minds and bodies to work with.

Trades within the league would appear to be what all of that points towards and he has until August 7th to get some deals done. And while taking on players from the worst team in the West may not be an attractive proposition to other clubs in the league, there are certainly players with a MLS pedigree that should garner interest.

Fredy Montero was dropped from the gameday squad to face Cavalry, or rested to use the preferred parlance. His season here has not reached the dizzy heights of 2017. He has six goals on the year, only two from open play, and has looked a shadow of his former self, in part because he’s been playing football pretty much non stop for 12 months and in part because he does not seem to be the ideal person to fit the system MDS want to play.

Montero’s body language on the pitch of late has not been good. He cuts a dejected figure and teammates have been yelling at him. His stock is still high in MLS and I have no doubts he’ll thrive again in a different set up. He would appear to be the perfect trade bait.

As does Felipe, who needs a fresh start to refind the player that was so influential in Montreal and New York.

I also wouldn’t be surprised to see someone like Jake Nerwinski dangled out there on the trading block, and let’s be brutally honest here, are there that many current Whitecaps that you wouldn’t be fine with them moving on?

The big question though is what can the Whitecaps get in return. You’re not going to get a key player from any club chasing a playoff place and bringing in new blood that is no better than what we currently have here does nothing but appease some people who just want to see things freshened up. It also goes against everything Dos Santos has preached about building his squad. 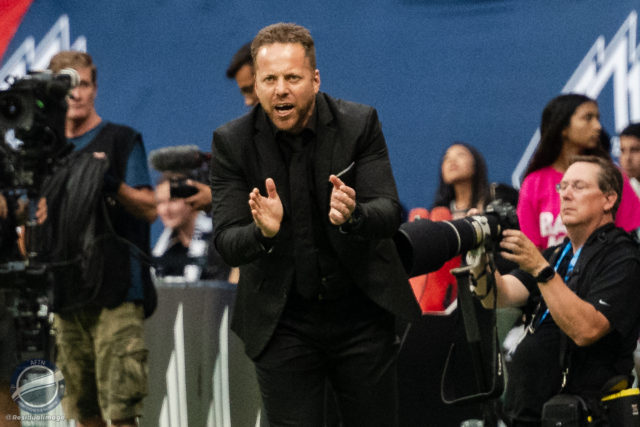 Blowing up the squad he built by blowing up the squad he inherited was clearly not in the plan and you have to wonder if Dos Santos is now realizing the extent of the task he faces here coming into a club with no identity, scouting system, or comparative budget to the top sides in the league.

The season’s gone barring a miraculous change in fortunes. It’s all about building a base now for the next campaign, but the on the pitch woes are just a part of all of this. Off the pitch the club is also a mess.

Attendances are plummeting. Just over 16,000 were in attendance at BC Place last night. That’s kind of expected for the Canadian Championship, a midweek match with a late kick off for a tournament many sadly don’t value enough. Except a quick look around the stadium and it felt pretty clearly that this figure was tickets sold and not those in attendance.

The crowds have been dwindling and those who are attending are becoming more vocal in their displeasure, showering the team in boos and chanting for change within in the front office. If results continue, it’s only going to get worse. Keeping interest up in a losing team that’s not back home for over three weeks is a near impossible task, perhaps matched by the poor ticket reps who have to try and solicit season ticket renewals from August 1st.

Auto renew will secure many, but many are cancelling and giving up multiple tickets they’ve held since 2011. Current ticket holders are finding they are not even able to give their tickets away on matchdays when they can’t attend.

Many were lured back last year with promises of three Designated Players being signed (to be fair, they did that, maybe just not to the levels people had hoped), more attacking and attractive football, and of course the Alphonso Davies transfer money to splash.

Many feel duped. Fool me once, and all that.

How do the Whitecaps get these fans back on board or is it a lost cause? Hitting a club in their pockets financially often leads to kneejerk reactions. What that could mean in Vancouver is anyone’s guess. Right now the safest investment would appear to be brown paper bags.

It feels that only a change in the front office or ownership group and/or a change to their spending will appease some. Others will be back no matter what. But this feels like a major fork in the road for the club. We felt that after Robbo’s sacking mind you and look where we are now.

Where do they go from here? I honestly don’t know. I’m not sure those within the club do either. It can’t get any lower surely, although no more wins for the rest of the season and attendances dropping further would probably be that place. An overhaul is needed in so many aspects of the club from playing personnel to recruitment to development to general front office operations.

I know MLS is meant to be a league of parity and you can turn a bad season into good, but the Whitecaps already feel so far of the pace of the top teams that it’s hard to imagine them being relevant any time soon. Forget being a top 25 side in the world, they’re barely a top 25 side in MLS.

In a season that should have been one of celebration, it’s felt like a wake. Fan protests, walkouts, damning allegations of historic mismanagement, and poor football to cap it all of. The whole vibe surrounding the club is not an attractive proposition for anyone.

At least there’s not relegation.