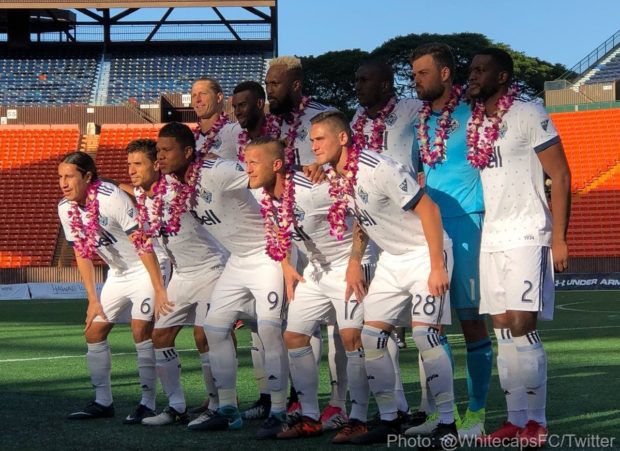 You can’t really take too much from preseason results, but you can glean a little bit from the performance of certain players, especially those battling for starting spots, matchday squad spots, and even a place on the roster altogether. Thursday’s second preseason match for Vancouver Whitecaps gave us some reference points for these battles ahead.

It is, but it was a good outing on the whole on Tuesday, well from what the highlights showed us, with a clean sheet, a couple of set piece goals, and Kei Kamara’s first for the club.

If the ‘Caps did that to a Japanese J1 League side, what would they do against the Japanese sixth tier team Iwaki FC? Make hard work of it as things turned out.

The Whitecaps eventually came away with the narrowest of narrow 1-0 victories thanks to a 90th minute penalty from Cristian Techera, after a shove in the back sent Kei Kamara to ground in the box. That saw the ‘Caps sneak into Saturday’s final of the Pacific Rim Cup final against Sapporo.

“They played full of intensity from the first minute,” Robinson said after the match. “They worked very, very hard, which was good for our guys because we need that. When you’re going into games like this you’ve got to get your players to think and get out of it what you want, and we certainly did that.”

It was a strange one. The players looked sluggish, a week training hard in the heat starting to take it’s toll perhaps. Robinson has stated a couple of times this week that he’s wanting to really put the players through their paces in Hawaii.

Drain them in the heat and make life difficult for them, forcing them to play through the pain barrier and mental tiredness, and that again was the plan for facing Iwaki, but he feels the players are starting to slowly get up to the fitness levels he wants to see and demands.

“Yeah, bit by bit,” Robinson said. “They’ve still got a lot of work to do, but I wanted them to go into the game tired. We’ve got another game in two days. That’s why they only played 45 minutes. So the sessions inbetween are the physical ones. But I want them to be tired going into the games because I want them to think a little bit more.”

You could argue that a draw (and the penalties that would have followed) would even have flattered the ‘Caps. Both teams had some good chances, with Stefan Marinovic making a couple of big saves in the first half, and the Whitecaps having the best opportunities to open the scoring with some gilt edged chances.

It was a beautifully chipped spot kick from El Bicho to get the victory in the end, and the Bug has looked good both at training and in the two preseason matches we’ve seen so far. Definitely a player out to secure his place in the starting 11. The same can’t be said for some of his teammates, both new and old.

Cristian Techera scored a 90th minute penalty to give #VWFC a 1-0 win vs #IwakiFC in #PacificRimCup opening match. Poor performance and somewhat fortunate result for #WhitecapsFC, outplayed for long stretches by the Japanese 5th division side, who had multiple great chances. #MLS pic.twitter.com/P6wVziMcFW

Anthony Blondell, playing his first minutes as a Whitecap, should have buried a shot from close in near the end of the first half, and Kamara had three great opportunities in the second, hitting the bar, heading off the ground over the bar, and failing to get on the end of an Alphonso Davies ball across a gaping goal.

Iwaki also hit the bar though, and enjoyed the better possession at times. They looked gutted when the penalty award was given, which was a little soft.

With only 22 players able to be dressed for the match, the ‘Caps decided to field two different sets of 11 players, making the mass changes at half time. Both line-ups went with four at the back, despite all the talk of system changes, and while some shone, others struggled, probably not helped by a pitch that looked dreadful.

Marinovic was the best Whitecap in the first half, keeping the scorers level with some strong stops. Efrain Juarez had a good half, and had a couple of nice, strong tackles. His central midfielder partner Aly Ghazal struggled though and was one of the poorer efforts from the first 45 minutes.

As we were saying. #VWFC pic.twitter.com/ex85xhmxZw

Doneil Henry also saw his first minutes as a Whitecap and looked okay in beside Kendall Waston. Nothing spectacular, but strong and steady, and certainly not looking like a player who hadn’t played a competitive game for over a year. A promising start.

“It was great to see him back,” Robinson said of Henry’s performance. “I’ve seen it in training. He’s been desperate to play. He gets his chance today for 45 minutes and he’ll get another 45 minutes on Saturday. He’s a big strong boy, he’s very comfortable on the ball, and he brings us something different.”

Jake Nerwinski also played his first minutes of the preseason, after rehabbing his injury from the Seattle playoff game up until now. He had a couple of runs forward, but is still needing to get up to game level fitness.

Blondell looked a little out of sorts and little isolated, the very thing the new three at the back system was meant to help avoid if they played it. But he is coming back from a knock that he picked up on the first day of training. Shea made some runs but wasn’t exactly threatening and Nicolas Mezquida tried to get involved but couldn’t make much of an impact.

It was all change in the second half, and the first ten minutes were far more exciting before the game fell back into a lull.

From the positives, Kei Kamara is looking lively up front, and hungry. Frustrated when he doesn’t put away a good opportunity. I like to see that in preseason. I have very high hopes of the partnership him and Alphonso Davies may form this season. There’s definitely an on-field chemistry brewing there and once they both get on the same page and up to speed I think we could see the pair cause some damage.

“He does it every day in training,” Robinson said of Kamara’s desire and commitment right to the end. “That’s the minimum I expect from him. He’s in the box all the time. He probably should have scored with one or two headers, but it’s important that we get service for him, because when we get service in there, we create chances.

“Obviously he wins the penalty, which is great. Whether it was a penalty or not, I don’t know. But he’s always there or thereabouts in the middle of the action, which is what we want.”

David Norman Jr had a mixed half. It definitely felt that the pace of the game was passing him by, with some misplaced passes to positions where he probably expected players to be. There’s no doubt that will soon come, and he talked about that himself in Sunday’s AFTN Soccer Show. It was the same when he first made the move up to USL from college. His did put in an absolutely fantastic tackle in the 81st minute. Hard, but fair, and looking forward to seeing a lot more of them.

When it comes to the battle of the backs, we have draft picks Justin Fiddes and Lucas Stauffer, and MLS vets Sean Franklin and Mark Bloom trying to win contracts. Only Fiddes and Bloom saw minutes against Iwaki and both struggled. Bloom did get forward a little, and sent in one good cross that sticks in my mind, but neither impressed on this showing to get that deal just yet. Stauffer by all accounts was excellent on Tuesday and we all know what Franklin can do, so interesting times ahead there.

Brian Rowe didn’t have an assuring outing in goal in the second half. His distribution was poor, and position and handling not the best. We just have to hope Marinovic won’t miss too many games with being away with the New Zealand national team.

At the end of it all, not exactly a performance to write home about, but a win is a win. By any means necessary, which has become my mantra for the team of late.

A 1-0 victory over a lowly ranked team won’t calm the fears from many in the fanbase that the ‘Caps haven’t got the pieces they need to compete with the big spenders in MLS this season.

But Robinson was reasonably happy with what he saw. He’ll know it needs a lot more work, but we should all remember, it’s still early days.

“I think it was an all round good performance,” Robinson felt. “We need to improve in certain areas. We lacked a little bit of quality in the final third. When we did have quality, obviously we had a number of chances. But it was an exciting game and credit to them as well.”

Something to build on. Another clean sheet and some promising signs, but with the tire them out approach adopted by the ‘Caps this phase of the preseason, I don’t think we should be expecting to see much from this team for a few weeks yet.

When you say that after two wins, that’s very much a positive.