There’s starting to be a bit of a gap developing between the title contenders and the chasing pack after the Week 5 action in the Vancouver Metro Soccer League (VMSL) Premier Division.

The top three teams bolstered their championship credentials by picking up points at the weekend, while at the bottom a points deduction negated a winning performance from one of the teams trying to stave off a relegation battle, as the action starts to heat up across the league.

BB5 United CCB kept their place at the top of the VMSL standings with a 2-1 victory in the match of the weekend over VUFC Hibernian up at UBC on Sunday afternoon. Ramsey Alfantazi and Nic Morello were on target for BB5 to keep their unbeaten start to the season intact. Roman Sinkus was on target for VUFC, who fell to their first defeat of the year.

Keeping pace with the Surrey side are Coquitlam Metro Ford Wolves, who sit one point and one place back after a 4-1 win at MAFC Elite at Trillium on Sunday evening. Carlo Basso and Adam Jones both bagged a brace for Coquitlam, with Mohammad Karimipoursaryazdi getting the lone goal for MAFC.

Club Inter EDC sit third in the table on 10 points, three behind the league leaders after a 1-1 draw with West Van at Ambleside on Friday evening. Both the goals came from the spot in the second half with Alex Marrello firing Inter ahead before West Van tied things up with a penalty of their own to share the points.

You can see highlights of the match on the VMSL Instagram below:

Friday night also saw SFC Pegasus and Croatia SC play out a 1-1 draw at Newton. Amitoj Arora was on target for the Horsemen, with Mario Kovacevic grabbing his third of the season for Croatia.

Rino’s VSC Coastal ran out comfortable winners at South Surrey Athletic Park over Burnaby Selects White Eagles. Cameron Kamensek, Isaac Kyei, Sean Northcote, and Jake Starheim were the Coastal scorers, with Vladyslav Matlash on the board for the White Eagles.

The bottom two sides battled it out at Fen Burdett Stadium on Saturday afternoon and it was BCT Rovers Hurricanes who came away with their first win of the season with a 4-1 victory over NVFC Norvan. thanks to a double from Nick Soolsma and goals from Ryan Dhillon and Brady Weir. Anthony Paiero grabbed the consolation goal for the home side.

But it wasn’t all good news for the Hurricanes who suffered a three point deduction for fielding an ineligible player in the season opening loss to West Van. That deduction keeps them tied at the bottom with Norvan on one point.

The full VMSL Premier Division standings after the Week 5 action are as follows: 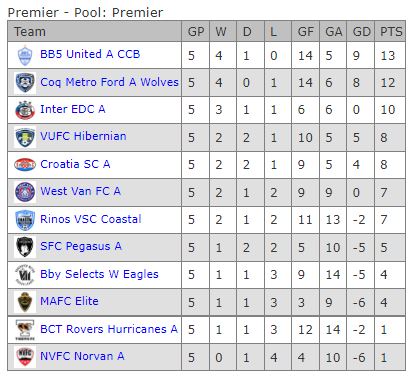