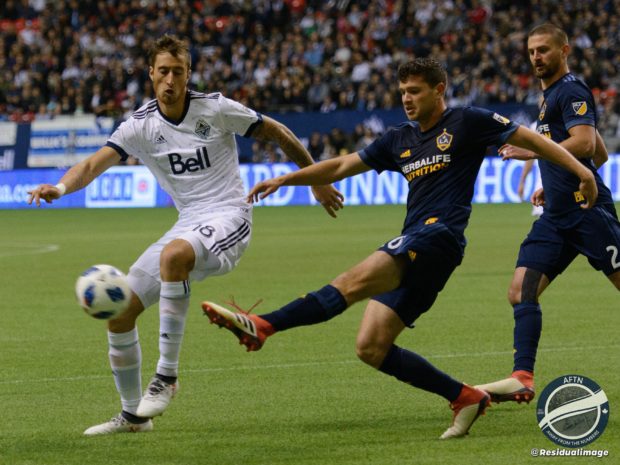 The depth on this year’s Whitecaps squad is probably the strongest in their eight MLS seasons to date. The midfield in particular raises a number of questions around starters and formations to best utilize them, but it’s been in the centre of the defence that perhaps the most pressing issue has arisen so far.

Tim Parker’s departure to New York Red Bulls just before the 2018 MLS season began left the ‘Caps depleted in their centre back ranks. Doneil Henry injured his hamstring preseason, and still isn’t back up to match fitness. Jose Aja had just arrived from Orlando just before Parker had left. David Edgar was training with the team, but hadn’t re-signed.

That left Aaron Maund as Kendall Waston’s de facto partner in the middle of the ‘Caps defence to start the season. The former RSL man did well alongside the Towering Tico in the first few matches, and partnered Aja in the match against the Galaxy with Waston away on international duty.

But the question remained – who would become the new Parker, and Waston’s regular partner at the back? Maund had certainly put himself in a good position, but with Waston back in the line-up for Saturday’s game at Columbus, it was Aja who got the nod to start beside him, having made the bench in the MLS Team of the Week in that LA match.

The Uruguayan did well and seemed to strike up an instant chemistry with the ‘Caps captain, and for me, it should be his place to lose now.

It’s been a fast moving few weeks for Aja. It’s barely over a month since he was getting set for Orlando City’s season, fully believing he was part of Jason Kreis’ plans for the team moving forward. The next thing he knew, in true MLS fashion, he was taken aside for a talk after training and Aja and his family were on the move to another country.

“My first sensation was surprise,” Aja admitted to AFTN. “The coach there in Orlando, he told me that I was very important in the team and I would play, but after training he talked to me and told me about the trade. Then I received a call off Carl [Robinson] and I’m really happy to be here because he said that he trusted me and I would be important here in the team.”

But while it may have been a move out of the blue for Aja, it was a case of Carl Robinson finally getting his man. It just took him three years to do so.

The ‘Caps coach was down in Uruguay watching a number of players at the end of the 2014 offseason. He liked what he saw from Aja, but the asking price for the then 21-year-old wasn’t so appealing to the budget at his disposal, and in the end, another Uruguayan centre back, Diego Rodriguez, became a Whitecap. The trip did produce Cristian Techera, so it wasn’t all bad, but when the opportunity arose to finally bring Aja to Vancouver three seasons later, he jumped at the chance.

“I watched him three years ago,” Robinson said of Aja a few weeks ago. “It’s a small world, because when I went down to try and find some players in Uruguay, I liked the look of Jose. I saw him, but he was out of my reach and I ended up with Cristian Techera. Three years later and I end up with Jose as well. It’s a great trade for us. He brings an extra dimension for us. He’s a talker, he’s very good on the ball, he reads the game very well and I think he’s different to what we’ve got already.” 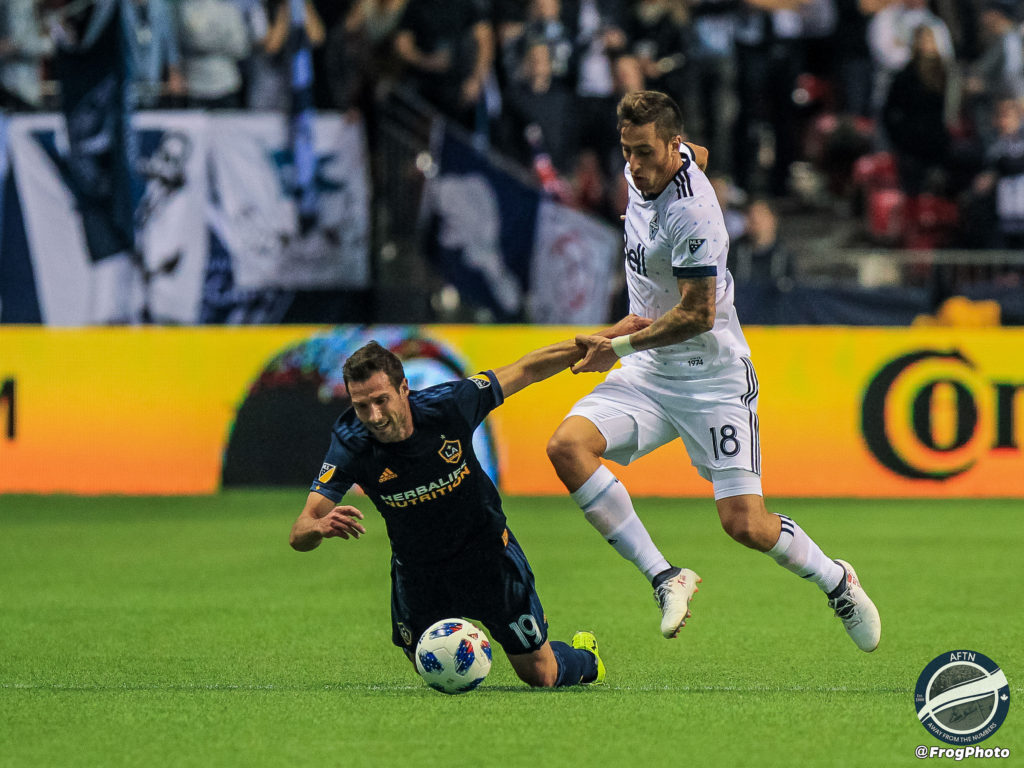 Aja finally made the move to MLS the following season, joining Orlando in the summer of 2016, initially on loan before the Lions made the deal official last year. At that point he had no idea of Robinson and the Whitecaps earlier interest in him.

“I did not know that,” Aja revealed. “When I arrived here he told me that. That he was looking at me in Uruguay a couple of years ago when I played for Nacional in Montevideo. He’s said that he’s very happy to have me here.”

Aja had mixed fortunes in Orlando. He made 10 appearances, nine of them starts, in his debut season in the league, helping Orlando keep three clean sheets in the season run-in. Last year saw the Uruguayan in and out of the team, beginning the season as a starter before suffering a hamstring injury and then falling in and out of favour in the coming months as Kreis regularly rotated his backline. He ended the season on the bench, not playing in any of the team’s last seven matches following an 80th minute sending of in September’s 4-0 loss at New England.

Many of a purple persuasion felt that the writing was on the wall for Aja in Orlando, but by all accounts the 24-year-old was having an excellent preseason and as he said, Kreis had indicated he was in his plans.

Whether he would have been if Vancouver hadn’t come in for him, we’ll never know, but Aja now finds himself in a different conference and in a different country. A shock, sure, but at least he has the knowledge that he is at a club where the coach has coveted him for a long time.

“Yeah, that is very important,” Aja agreed. “For a player, the most important thing is to have a coach trust in you. It gives you confidence to play. That’s the best thing for me. That’s the reason that I’m so happy here.

“I have great teammates, who are tough. The atmosphere here in the team is absolutely perfect and I’m so excited [to be here].”

The challenge for Aja now is to nail down that regular starter’s role in the Whitecaps defence beside Waston, and to be the man who will lead the team from back there when the ‘Caps captain is away in Russia for the World Cup.

So far, so good, well if you ignore the bombscare that was the whole team in his Whitecaps debut, the 4-1 loss in Atlanta. Starting the game with three at the back, a system Aja has experience of playing in Uruguay, and rocked by Waston’s wrongly received red card, that’s not a game to judge anyone in. 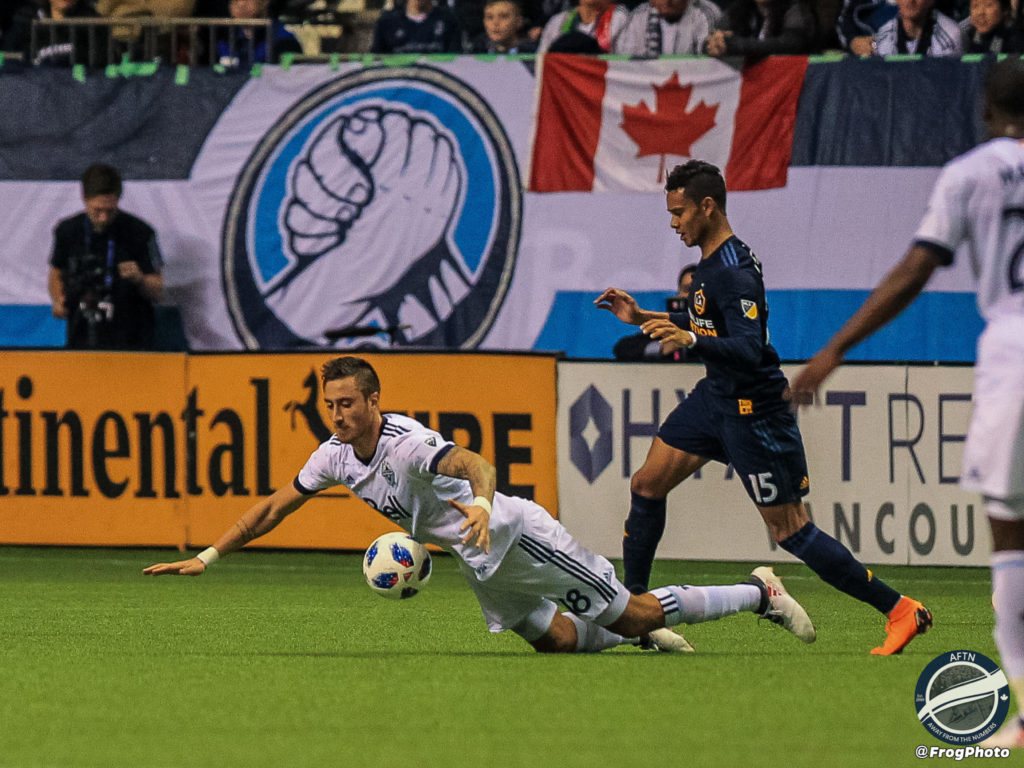 His next two outings have been far more impressive, helping the ‘Caps take four points and give up just one goal, and that was from a goalkeeping error. There was a slip that let Emmanuel Boateng race past him towards goal against the Galaxy, but that went unpunished and will certainly happen to some of the best defenders in the league this season if he shows flashes of speed like that.

It might be too early to read too much into Robinson starting him alongside Waston for the win in Columbus, but the pair certainly looked to instantly click together and both players being Spanish speakers will undoubtedly have helped that chemistry along.

“I’m taking lessons in English,” Aja told us. “But playing beside Kendall, that speaks Spanish, it’s better for me that he speaks the same language as me. I need to improve my English to talk to the other teammates, but to have Kendall beside me is really important.”

His English is already excellent incidentally, but it’s all part of settling into what is still a relatively newish environment of MLS.

After coming through the various youth systems in Uruguay, where he knew of new teammates Techera and Nicolas Mezquida but hadn’t played alongside of them, Aja made his professional debut with Club Nacional in August 2014, going on to make 10 appearances that season to help them win Uruguay’s Torneo Apertura and the Uruguayan Championship in the 2014-2015 season.

The move to MLS came pretty early in his pro career, with Aja another example of young South American talent keen to come to the league. There’s many reasons why that is now the case, but for Aja he’s enjoying being part of a league on the rise and one that plays the game a bit different to what he is used to in Uruguay, which suits his own style of play far better.

“Here, you have more space to play,” Aja mused. “In Uruguay, it’s a lot of defence. The football there is too aggressive, so you don’t have too much space to play. So I think here you create more space. You can play better. You can move with confidence. I really enjoy this league. It’s a league that is improving year by year.”

Three years into his new life in North American football, Aja is clearly still loving and relishing the challenges and opportunities it has thrown up. He, and his family, are also unfazed by having to up sticks and leave the place they called home, and despite never having been to Vancouver before the trade, they’re loving their new one.

“I’m really surprised by the city,” Aja said. “I’ve never been here. This was my first time and my wife loves here. And me too. The city is really nice and beautiful. Now, it is cold, true, but in Orlando it is too hot. It’s always the same weather and it is getting boring because it’s always the same temperature!

“Here, you have the beach, you have the mountains, you have a lot of things to do. To have a small city, that is really good for me to see the city. Me and my wife are really happy here. We’ve found an apartment and we moved last week to our new home, so really excited.”