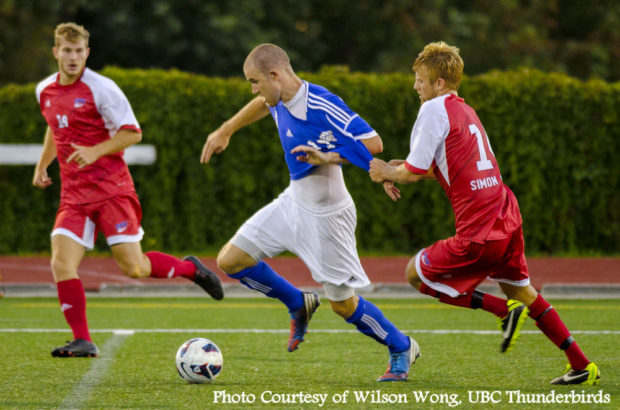 It was the battle that fans of Vancouver college soccer had been waiting three years for and Saturday’s night’s game between SFU Clan and UBC Thunderbirds didn’t disappoint.

It was NCAA v CIS and in the end it was UBC who dominated from start to finish in front of a 400 strong crowd, running out comprehensive 3-0 winners thanks to goals from Milad Mehrabi, Paul Clerc and Whitecaps PDL player Niall Cousens.

The Thunderbirds looked sharper, more cohesive and deadlier from the start against an uncharacteristically out of sorts looking Clan side that really struggled to create any clear cut chances for most of the match.

UBC outshot the home side 16 to 9 but it felt more, with the Thunderbirds having the best chances and SFU unable to find a way though a defence that only let in 10 goals all of last season.

This may have officially been a friendly but there’s no such thing between these two teams and there was a lot of passion and hard fought tackles flying in from both sides.

Both teams started brightly and the game was flowing from end to end. SFU had a couple of half chances saved by UBC keeper Richard Meister early on and the Thunderbirds’ Navid Mashinchi forced new Clan keeper Scott Shewfelt into a leg save at his near post in the 9th minute.

Shewfelt seemed to twist his leg in the challenge but was able to continue.

Mashinchi was one of our five ‘ones to watch’ for UBC in our season preview and the former Whitecaps Residency player gave SFU a torrid time throughout, especially in the first half.

Niall Cousens was proving to be a real handful up front for the Clan defence, as he will be for most defences in CIS this season, and it was the Caps PDL star who had a hand in the breakthrough goal 20 minutes in.

Cousens powered forward and slipped the ball through to Sean Einarsson who crossed into the box for Milad Mehrabi to fire home with a lovely finish.

UBC sensed blood and two minutes later Cousens crossed in for Mashinchi but his shot was cut off and turned round for a corner.

UBC should have had a chance to double their advantage in the 26th minute when Cousens was pulled back in the box (see photo above), but the referee waved play on and the Thunderbirds were denied a clear penalty.

The visitors continued to take the game to Clan and they came close again to increasing their lead in the 39th minute when Mashinchi crashed a shot off the right hand post with Shewfelt beaten.

UBC won a corner with two minutes of the half remaining and Cousens rose unchallenged to meet Mashinchi’s inswinger from the right, only to see his goalbound header cleared off the line by Alex Rowley.

That was to be the last action of the half and SFU had a chance to regroup after being under the cosh for much of the first period.

Coach Alan Koch had made a number of changes during the first half and at the interval but within two minutes of the restart they were two down when Paul Clerc rose well to head home a pinpoint cross from Bryan Fong on the right.

SFU didn’t let their heads go down and pushed forward to try and get themselves back into the game.

Lucas Ferritto had a header saved in the 50th minutes and seconds later Colin Jacques did well to spin round and fire a shot inches past the left hand post from 12 yards out.

A goal in that spell could have been a game changer for the Clan but they ended up falling three behind in the 56th minute when Cousens once again easily rose above the SFU defence to sweetly head home a Mashinchi cross from the right.

That was pretty much game over. SFU were now playing for pride and the fringe guys were trying to make a claim for a place as a starter. To their credit, they battled back well for the rest of the half and had more luck in finding ways through the Thunderbirds defence than the regular guys.

Meister was called into action to save a fine half volley from Ferritto midway through the half, as SFU battled to get a goal on the board.

Cousens thought he had added a fourth in the 70th minute but the officials were quick to rule it out for what we think was a foul on the edge of the box.

Shewfelt produced the save of the night with 15 minutes remaining when he acrobatically turned a dipping long range shot from Reynold Stewart around for a corner.

SFU had a couple of chances to round off the night and the game started to see a few chippy challenges flying in.

The final whistle brought a comprehensive 3-0 victory for UBC, with a lot of positives to take from the game.

Cousens and Mashinchi were linking up fantastically well up front and will combine for a lot of goals this season. Mashinchi was my ‘Man of the Match’. Stewart put in another tough tackling shift in the middle of the park and will play a vital role for the Thunderbirds this season.

For SFU, there weren’t lots of positives but the main one will be that a defeat like this, at this stage of the season, will be good for Koch to work with and shape the team before their season gets underway next week. There seems a lot of work to do to get them back to their best form of last year but they have the advantage of not being in the strongest of Conferences to get this right.

The fact that many of the fringe players performed better than the regular starters will no doubt give Koch some foot for though.

Chris Bargholz put in one hell of a shift for the Clan and was tearing up and down that right wing, helping out strongly with some defensive tackles to break up UBC attacks.

Shewfelt looks like he’ll be a good addition to the squad to replace the two seniors that have left but for the Clan to really click this year they need to get maximum output from Carlo Basso and Ryan Dhillon, both of whom were subbed out in the first half of this one. They also need the other guys to rise up and bang in a few more goals themselves.

UBC now kick off their CIS season with a trip to Victoria to take on the Vikes on Friday September 6th. SFU head down to California for two games to start their season, with CSU East Bay Pioneers first up on Thursday evening.

We wish both sides well for the season ahead and will be providing regular coverage of both schools as they look to capture their respective Championships.