The 2022/23 Vancouver Metro Soccer League (VMSL) Premier Division season is shaping up to be one of the most wide open for a few years, with teams continuing to take points off each other to keep things tight at the top.

There’s definitely a few clear title contenders at the moment, with some clear relegation favourites as well. In the middle of the pack are a number of teams whose season could go either way right now depending on how the next few games go. Will they be battling at the top and for Provincial Cup places or will they find themselves as also rans and possibly looking over their shoulder down the stretch? We’ll start to have a better picture soon.

With five weeks of the season now in the record books, Croatia SC are still top of the pile and still undefeated, although they did drop their first points of the campaign following a scoreless draw with Port Moody SC on Saturday afternoon at Empire Fields.

Sitting on 13 points, the 2018/19 Premier champions now hold a one point lead over VUFC Hibernian, who got their fourth win in five matches following a big 5-0 win over Westside FC at Thunderbird Stadium on Friday evening. Mario Kovacevic started the scoring for the Hibees in the 10th minute, with Patrick Braun doubling their lead two minutes later. Braun struck again six minutes from half time to put VUFC three up and Kyle Dent made it four in the 80th minute. Kovacevic then rounded off the scoring three minutes from time, grabbing his second of the night to see Hibernian go nap.

Three teams sit back of the top two on nine points, four points off first.

Coquitlam Metro Ford Wolves headed to Ambleside on Friday evening and left with all three points and a 3-1 victory. Moreno Zanetti put the visitors ahead in the 16th minute before Carlo Basso doubled that scoreline 20 minutes later, grabbing his Golden Boot leading eighth goal of the campaign.

Connor Robillard pulled one back for West Van from the spot 10 minutes into the second half and the home side must have fancied their chances of grabbing something from the game when Coquitlam’s Cole Toupin was sent off for a second bookable offence on the hour mark. But it was Metro Ford who got the crucial next goal, with Kyle Jones tucking away a 74th minute penalty to seal the win.

The other team on nine points are defending VMSL champions BB5 United CCB, who have a game in hand with their match against Surrey rivals BCT Rovers Hurricanes called off with the defending Provincial Cup champs on Challenge Trophy duty in Vaughan, Ontario where they reached the bronze medal game, but ended up finishing the tournament in fourth place.

The other match from the Week 5 slate saw an all-Surrey clash on the newly laid Newton Athletic Park stadium turf, with Coastal FC beating SFC Pegasus 3-1. Sahil Sandhu opened the scoring for Pegasus in the 13th minute but an own goal saw Coastal level things up two minutes later. That was how it stayed until the 72nd minute when Jake Starheim put Coastal ahead for the first time in the match and Sean Northcote sealed the points for them seven minutes from time.

So after all of that action, the VMSL Premier Division standings look as follows: 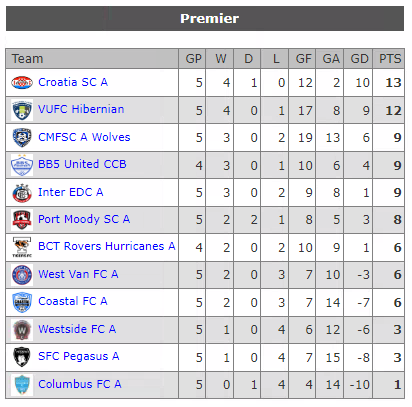 There’s five more matches on the slate this weekend. Here’s what’s lined up. 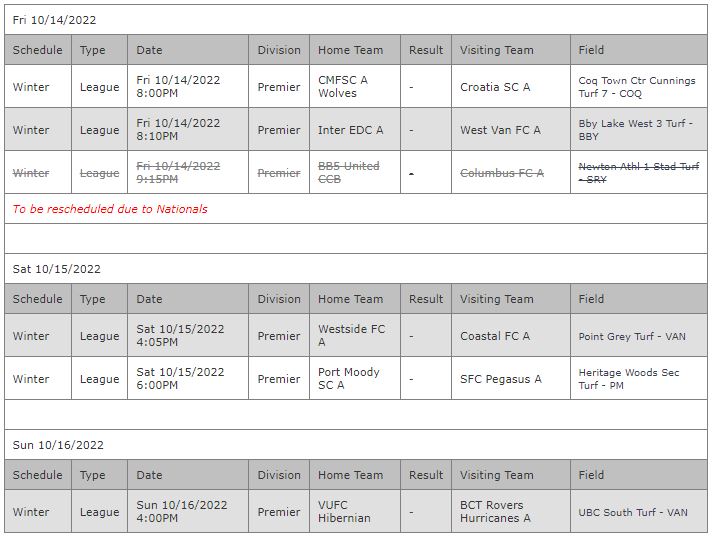 You can find all the latest results, fixtures, and standings across all of the divisions on VMSLsoccer.com.