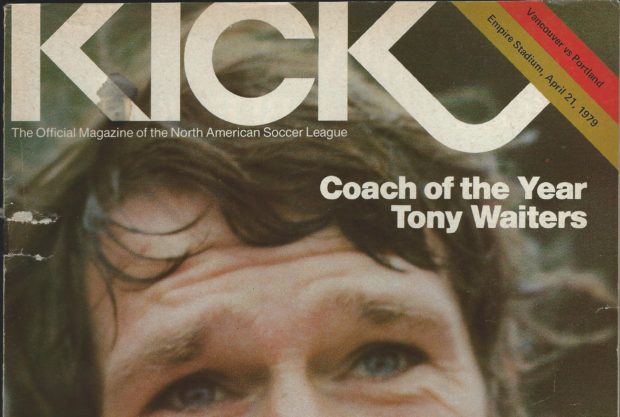 Every week on AFTN from now until September 8th, we’ll be recapping the Whitecaps 1979 Soccer Bowl winning season with the help of matchday programs, photographs, and more. We’ll bring you all the highs, all the lows, and the all the wonder of their famous final victory, with a splattering of 1979 nostalgia and some interviews thrown in as well.

Week four of the season saw the Whitecaps return home for their first Cascadian derby of the year.

Portland Timbers were the visitors to Empire Stadium on Saturday April 21, 1979. A crowd of 23,137 was on hand to see the ‘Caps make it three wins on the bounce in a hotly contested 2-1 victory.

The Whitecaps headed into this one with a poor record against their Cascadian rivals winning just three of their nine meetings. There were some close games in amongst those, and this one was no exception.

The Timbers had shocked the Whitecaps the previous season and knocked the Western Division champs out of the playoffs at the Conference semi-final stage, giving this first meeting an extra edge.

Trevor Whymark fired the ‘Caps into an early 11th minute lead, with Carl Valentine and Bob Bolitho getting the assists on the goal.

Whymark had a great chance to double Vancouver’s lead ten minutes later after he was brought down in the box by Portland’s Graham Day. Whymark picked himself up to take the penalty but Timbers keeper Mick Poole got down well to turn it away with a fantastic save.

That gave Portland some hope of getting back into the match and they did just that a few minutes before half time when their Scottish midfielder John Bain fired in a long range beauty to tie things up again.

The ‘Caps were the better team in the second half but had to wait until the 76th minute to get the breakthrough.

Kevin Hector thought he had got it when his shot crashed into the net and hit the bar at the back of the goal. The ball came flying back out and the referee waved play on thinking it had hit the actual crossbar (where’s VAR when you actually need it). The same thing had happened the year before in a game at Empire against Colorado. This time though the rebound fell to Whymark, who fired home what was to proved the winning goal.

The next day, after pressure from fans and media, the goals were changed to remove that second crossbar!

The Kick magazine program for the match was another enjoyable read, featuring the 1978 NASL Coach of the Year on the cover, none other than the Whitecaps own Tony Waiters. 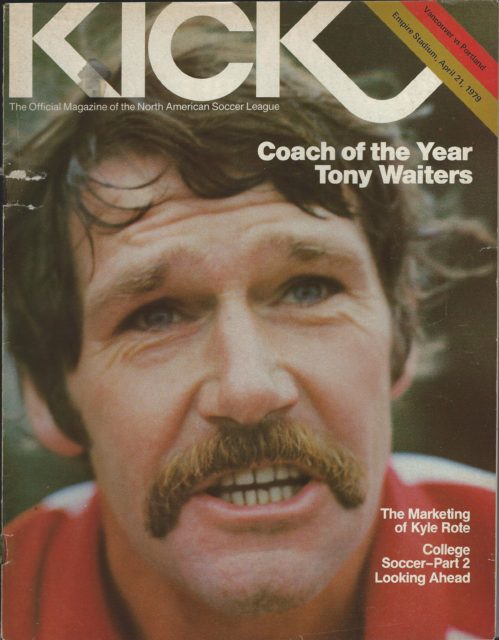 Inside was a three page feature on Waiters, telling the story of his youth, his career in England as a goalkeeper, and then his move into coaching, first in England and then in Canada with Vancouver.

You learn that Waiters went to a school that didn’t actually play football at it, so he had to learn his skills elsewhere. He started as a centre back and it was only when he joined the RAF that he started to play goalkeeper with his regiment’s team. After his national service was finished he was selected to play for England in an amateur international whilst at college. Scouts saw him and he eventually signed pro forms with Blackpool.

Less than a season into his pro career, he’d established himself as the club’s number one and played 10 years with them, playing alongside the legendary Sir Stanley Matthews. His performances with Blackpool saw him earn five ‘Caps with the England national team, but playing at a time alongside Gordon Banks, his appearances were always set to be limited.

Waiters moved into coaching, first as an assistant at Liverpool and Coventry, and then landing his first head coaching job at Plymouth Argyle. He took over a team near the bottom of the English Third Division, turned them into promotion winners, and even took them to a FA Cup semi-final.

He explains his coaching philosophy is clear, saying “looking clever is very nice, but scoring goals is what it’s all about”. He also believed in holding on to his team’s top players and not being a selling club. That clashed with Plymouth’s owners and when Waiters wrote a public letter stating that “because of difficulties within the club, it is likely that all my staff and myself will be seeking new employment at the end of the season”.

He didn’t have to wait that long and was sacked, which turned into Vancouver’s gain and he headed to the NASL, taking over midway through the 1977 season. The rest is history.

Other features in this week’s program included player profiles on Vancouver midfielder Ray Lewington and Portland goalkeeper Mick Poole, a three page feature on the business ventures of Dallas Tornado forward Kyle Rote Jr., an article on the early days of the game at the BC Soccer Hall of Fame, part two of a feature on college soccer, and part three of their ongoing feature on developing youth soccer.