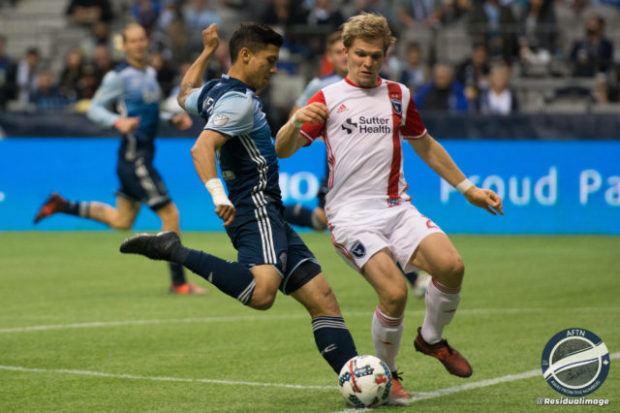 Aller guten Dinge sind drei. The German phrase, which basically translates as all good things come in threes, is one of the few things I remember from my high school German classes. I got a narrow fail in the final exam, but can remember some words, can count up to a hundred, and for some reason that phrase.

It’s never made sense to me why that particular phrase has stuck in my head. When would you ever need it? Well, as it turned out, in Friday’s Whitecaps media call to introduce their latest addition, German central defender Florian Jungwirth.

Jungwirth became the third strong addition to the Whitecaps squad this week, following hot on the heels of Scottish Designated Player Ryan Gauld and Ecuadorian midfielder Pedro Vite. The experienced 32-year-old made the move north to Vancouver from San Jose Earthquakes for a very reasonable $200,000 in General Allocation Money (GAM), with a possible further $100,000 going to the Quakes next year if certain conditions are met, namely if Jungwirth signs a new deal to keep him at the Whitecaps beyond this season.

Now in his fifth season in Major League Soccer, Jungwirth adds some much needed experience to a very young and stretched Whitecaps defence and an important veteran locker room presence. He will also hopefully add some stability and help shore up the holes in a backline that has given up the most goals (27) and has the worst goal difference (-9) in the Western Conference.

“We needed depth,” ‘Caps coach Marc Dos Santos said of Jungwirth’s addition. “We needed some options with the schedule that is up there in August and September, with the Canadian Championship, with so many games. When there were some knocks during the week to some of our centre backs we started to play a little bit with fire.

“It’s a talk we already had since we made the move with Derek [Cornelius], but in our head we wanted to go after another type of centre back at that point. It was important to have depth and another option there for when schedule is going to become condensed.”

So why was Jungwirth the man Dos Santos felt was the right man for the job? In part, availability, but his versatility and ability to play a number of roles for the team was also key.

“We know of his [versatility]. We know that in the last two games they’ve been playing in a 3-4-3 and he was one of the central midfielders with Judson in San Jose. He has a lot of games, a lot of lot of games as a centre back, some as a right back, and some as a defensive midfielder, so that made our decision easier and the team needs to make sure that we always have a lot of depth.” 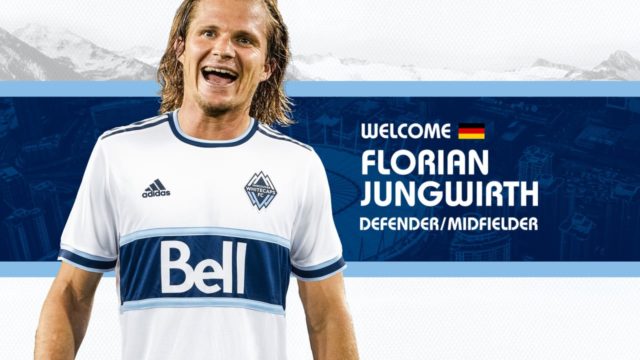 Vancouver will also get a locker room leader. A player not afraid to lead from the front, and one that doesn’t believe in anyone slacking off. For a young squad, especially on the defensive side, it’s just what the Whitecaps are needing and they should see it from Jungwirth immediately.

“No matter if I don’t start or don’t play in the beginning or whatever, I will try to lead by example,” Jungwirth told media on a call on Friday. “I’m always honest with guys… I think I’ve always had a good feeling on how to talk to different players and I’ve always got accepted as this kind of leader.

“It’s not about calling out. You want to help the guy to evolve, to do better, and to do the best for the team because no-one can have success on his own and everything you do every day should be for the team and for the ultimate goal, which for the end of the season. Sometimes, if it takes being a little louder in the locker room, then I’m not afraid to be that guy.

Jungwirth joined San Jose from Bundesliga side SV Darmstadt 98 for the start of the 2017 MLS season, after a nine year career in Germany. Loved by the fans, he’s gone on to make 126 appearances for the Earthquakes, and was named their Defensive Player of the Year in 2017 and 2019.

But after five years at the Quakes, and out of contract at the end of the season, Jungwirth started to feel that perhaps his future was going to be better served in pastures new, letting the San Jose front office know that he would be open to trade within the league, but with the summer transfer window closing, that possibility started to fade.

Jungwirth was then made aware of Vancouver’s interest before San Jose’s match in Portland on Wednesday. He was immediately open to the move, but had the pressing matter of a game to focus on. Less than 24 hours later though, he was a Whitecap.

“A couple of weeks ago I already had talks with our General Manager, so I knew that there might be a possibility for me for a trade,” Jungwirth revealed. “We had a very open conversation and I informed him that if there might be an opportunity I’d like to do it.

“But then the first time I heard that there might be something up with Vancouver was on Wednesday [afternoon]. My agent informed me, but we had a game with San Jose and I was starting so I was like I want to focus on the game first, so let’s talk after.

“After the game, I hadn’t received any message so I was like okay, I guess nothing is going to work out tomorrow since it’s the last day. If that’s what it was, I was fine with that too. And then I woke up, had a couple of calls from my agent, so thought maybe I should give him a call back!.”

Jungwirth was told of the Whitecaps interest, waited a couple of hours, spoke to Vancouver’s sporting director, and fellow German, Axel Schuster, was told the deal was done and he says he “couldn’t have been happier”. 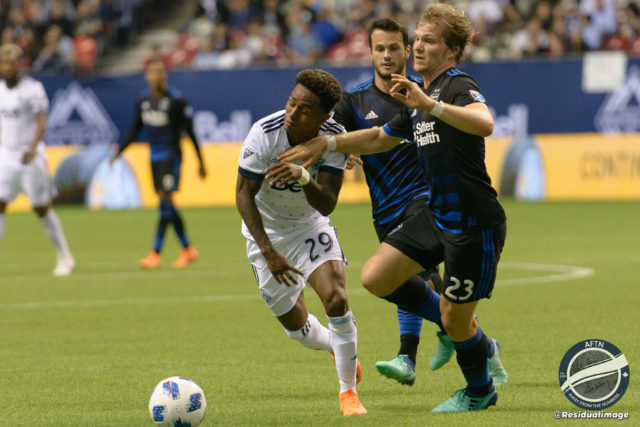 The centre back has played five times in Vancouver during his MLS career. Although he’s not had a lot of time to explore the city during those visits, San Jose spent three days here during one road trip, allowing Jungwirth the chance to look around a little bit and he liked what he saw.

“I’m always in for adventures, I’m always up to explore the world,” Jungwirth said. “Vancouver’s an outstanding city. For me it was like wow, this is one of the best cities I’ve ever seen in my whole life and I’ve seen a lot of cities.

“I think I always had in mind if one day I go another way, Vancouver was always top of my list, with maybe one or two other cities from that perspective. I can’t wait to explore more, get to know the people, the culture, and everything. I’m really glad.”

It’ll still be a few weeks before Jungwirth, his wife, and his dogs will get to move to their new home, however.

Deal done, the next stop for Jungwirth was getting his second dose of the Covid vaccine to enable him to move over the border regularly without quarantining. That means a 14 day period to allow the vaccine to take hold and leave him fully vaccinated. Usually that wouldn’t be ideal, but three straight road games actually helps alleviate that problem.

Jungwirth will make the shortish trip south to join up with his new teammates for this weekend’s match at the LA Galaxy, and will likely feature in the matchday squad. While the team fly back to Vancouver for a few days, he’ll stay in California before rejoining the Whitecaps on Thursday for their matches against his old side San Jose next Friday and then Austin five days later.

Midweek results have seen Vancouver slip to the bottom of the standings in the Western Conference, albeit just six points back of the playoff places. Austin sit one point and one spot above them in the table, San Jose three and three, making those two particular matches massive for the Whitecaps.

Jungwirth hadn’t faced off against his new club so far this season, but he’s watched a couple of Vancouver’s matches and is confident the ‘Caps can be playoff contenders.

“With San Jose, we hadn’t played the Whitecaps, but we faced teams that had played the Whitecaps, so I’ve watched a couple of games,” Jungwirth said of what he’s seen of Vancouver this season. “I can only pay my highest respect to the team because I think their situation is incredibly hard. They haven’t been home for more than a year. I can’t even imagine. I don’t know if I could have done that. For me, I pay all three Canadian teams so much respect and the way, when I watched Vancouver games, that despite their situation, they never gave up.

“You always saw that they wanted to win their games. They were always very disciplined, because I think you have all the excuses. When you lose, you could say we haven’t been home for a year and it’s a hard situation and so on, but I’ve never had the feeling when they played that they used those kind of excuses because they always tried to give their all, no matter what the result was.

“That’s a great mentality and I think that shows that the coach knows how to motivate the players despite the situations. The fact we can go home now to Vancouver, being back at home in the stadium, you can create a big energy there, a great atmosphere, and I’m really glad to be part of these special moments.”

And Jungwirth’s confidence in his new team goes beyond even that.

“I’m a hundred percent convinced with the current roster and the three additions, that we will reach the playoffs and win the Canadian Cup.”