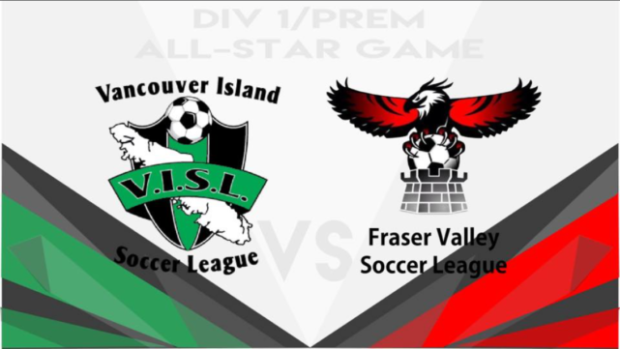 Saturday’s showcase of soccer on the island turned into a long day as the weather took a toll on the ferries, and delayed the last two inter-league games between the Vancouver Island Soccer League (VISL) and Fraser Valley Soccer League (FVSL) All-Star squads.

Well, it has been a very weird #VISL day. #AllStarGames have taken a hit as far as scheduling goes, but they shall go on. @FVSL1 are on the 3 pm boat, the #MastersA game will go at 6 pm. The #Div1 game will go right afterwards. Thanks to @PLSCVictoria for hanging in with us. pic.twitter.com/3ekWlTeZkS

In the end all the matches were played and memories filed, but it is unfortunate that many FVSL participants found themselves stuck at the ferry terminal all of Sunday, with many needing to stay another night on the island.

A huge shout out to Fraser Valley Soccer League and the All Star Teams for honouring their game committments to the VISL. They had a 5 hour wait at the ferry terminal because of wind forced cancellations…..but still came across and played.

At least the FVSL earned a win, and along with that trophy, they will have another trophy that I’m sure they “accidentally” acquired when nobody was looking. We thank all our League partners for making the day so enjoyable.

Results wise, here is the break down of the long day.

The first game of the day was an one-sided win for the U21’s as they defeated the Division 4 team by score of 6-0.

Ben Chaswick (Westcastle), Juan Rubiano (Westcastle), Matt Brown (Nanaimo), Kobe Chelini-Dheensaw (Prospect Lake), and a brace from Nico Kahl (Prospect Lake) got the job done for the U21s. Earning the shutout was Torin Lightbody of Prospect Lake. The Game MVP was the Division 4 Keeper Dekan Delaney of Bays Utd, who earned the honours for the match as he was on the overworked side and kept the score from getting to be double digits. For the U-21’s it was Cameron Holman of Mid Isle.

The first Provincial All-Star game was able to kick off at 6 pm and it saw the FVSL sneak by the VISL selects by the score of 3-2.

The feature match finally kicked off at 8 pm between the VISL Division 1 Selects and the FVSL Premier All-stars. The game ended 2-2 with the VISL squad going on to retain the trophy after penalty kicks.

Connor Hildebrant and Jon Craig were the FVSL scorers, with Koby Greaves of Westcastle and Blair Sturrock of Lakehill getting the VISL goals. Team MVP’s were both goalkeepers, Miguel Hof for the FVSL and Darian Achurch (keeper for Cowichan and overall game MVP), who stopped the first three penalties he faced.

An overall gorgeous day at Layritz Turf, home of Prospect Lake. We look forward to League games getting back underway next week…….weather permitting of course!!