It was a great day and weekend to be thankful and remember all the people that made our lives so enjoyable to live. Local soccer and community was a winner today and this weekend!

The VISL Game Of The Week was on Sunday afternoon, the McGavin Cup Final between Gorge FC from Division 1 and Vic West Casuals from Division 2.

The game did not disappoint, an exciting end to end type match that had several chances both ways, with both keepers playing very well. In the end a Dominic Colontonio goal was the difference between the two team, as Gorge came away with the 1-0 victory.

Matuez Deron kept the clean sheet for Gorge, while the game MVP was from Vic West – keeper Tyler Laing.

#McGavinCup pics from yesterday as @GorgeFC #Div1 defeated @vicwestfc #Div2 by score of 1-0 at Layritz. It wasn’t the prettiest of days, but I thought it was a highly competitive match. https://t.co/TD6bDqznWX… – congrats to Gorge, & very well played Vic West !

Here are the all the other results from the Remembrance weekend matches:

Those results leave the current VISL Division standings as follows: 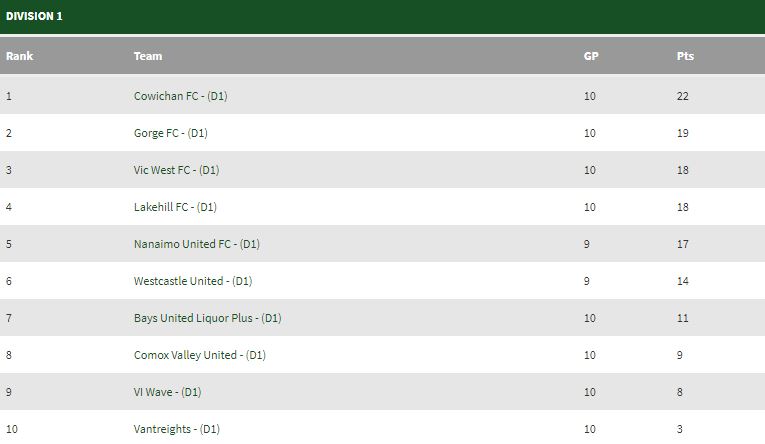 For all the latest news, results, and fixtures, visit VISL.org.