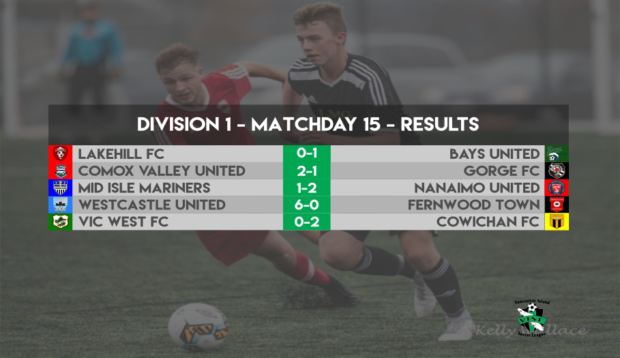 Week 15 of the 2018/19 Vancouver Island Soccer League season is complete, and it was a dandy. A home loss for league leaders Lakehill saw them drop from first to fourth, as defending champs Cowichan FC continued their push to make it five straight championships, but they’re being pushed all the way by Westcastle United.

Here’s how all the action played out.

Friday night started out with a bang as Bays Utd toppled the then league leading Lakehill thanks to a solitary goal from Nicholas Hurley, and shutting out the Lakehill squad was Bays Keeper Ethan May. That was Lakehill’s second loss in a row, while Bays picks up an important three points.

Saturday night had more drama as Comox got their second win of the year by defeating defending Jackson Cup Champions Gorge FC 2-1 with goals by Grayson Chalifoux and Eugene Park. Answering for Gorge was Mike Moon.

At Forest Field in Ladysmith, Nanaimo United were able to beat rivals Mid Isle Mariners also by score of 2-1. A late goal by Matt Mehrassa, after a first half goal by Sayed Hussein, did the trick for Nanaimo, with Aly Adeeb picking up the lone marker for Mid Isle.

There were no surprises at Westhills on Saturday night as Westcastle United defeated Fernwood by 6-0 scoreline.
Simon Stacey and Jonathan Walter had one apiece, with Joshua Walter and Goteh Ntignee grabbing a brace each. Westcastle’s Sachdev Grewal earned the clean sheet.

The final game of the weekend saw Cowichan FC blanking Vic West 2-0 in an entertaining match at Finlayson Turf. Steven Scott and Stevan Zoric got the goals that sent the defending champions to the top of the standings, with Darion Achurch earning the shutout for Cowichan.

Some big results there and after them all, the Division 1 standings have changed in a big way. Here is how they look now: 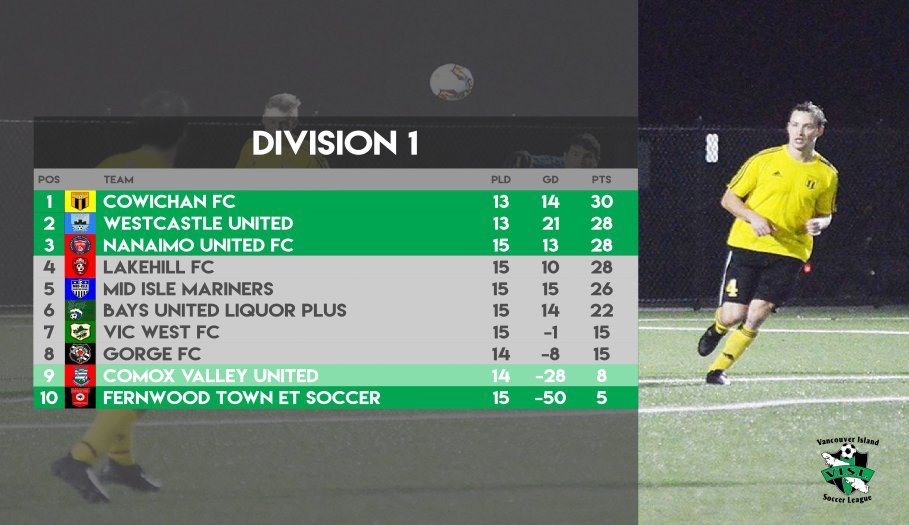 Cowichan’s win and Lakehill’s loss saw Cowichan move into first place in the standings for the first time this year. Cowichan will be now be thinking about winning the Garrison Cup, as Division 1 Champion for the 5th time.
A feat only done once since the creation of the Cup in the early 1900’s when it was done by Gorge FC in the mid 2000’s.

Westcastle will have something to say about that as they go head to head with Cowichan twice still in what should be a pair of good battles to likely decide the title.

Lakehill’s and Mid Isle’s stumble has been welcomed by Nanaimo as they jump into third place. We alos look forward to Comox and others giving teams a good battle – and wonder how many more points they will snatch up.

As far as goals on the weekend, Goteh Ntignee of Westcastle works his way up the ladder as the rest of the leaderboard was pretty quiet. The man they are chasing still is Patrick Nelson. Having won the scoring title five times already, and being the all-time leader in that department, he’s looking to put his hands on the 25 year old Golden Boot trophy for the sixth time.

Here is how that race is looking: 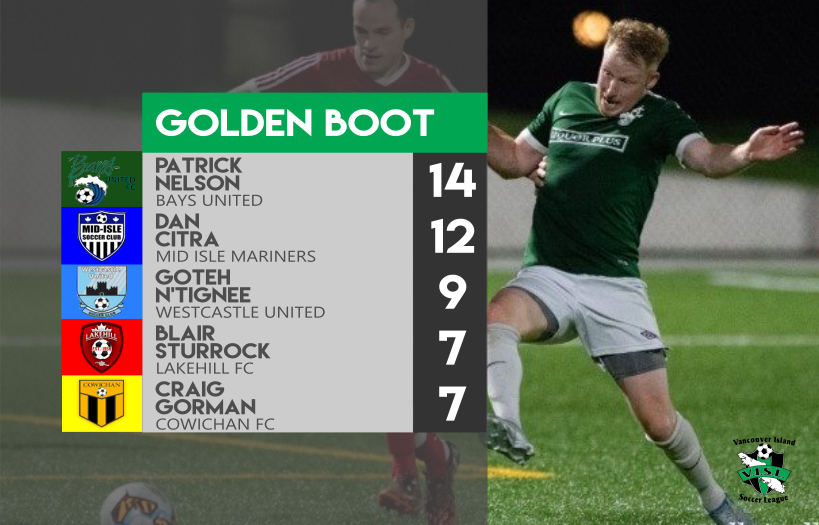 Week 16 has some tasty looking match ups this weekend. The final three weeks of league play will obviously be very important, with a lot on the line. 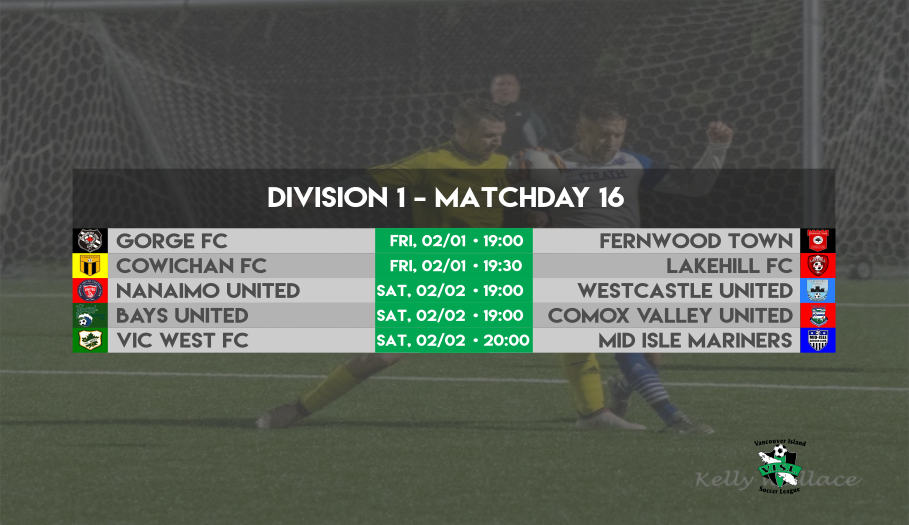 You can find all the latest results, standings, and fixtures on VISL.org.