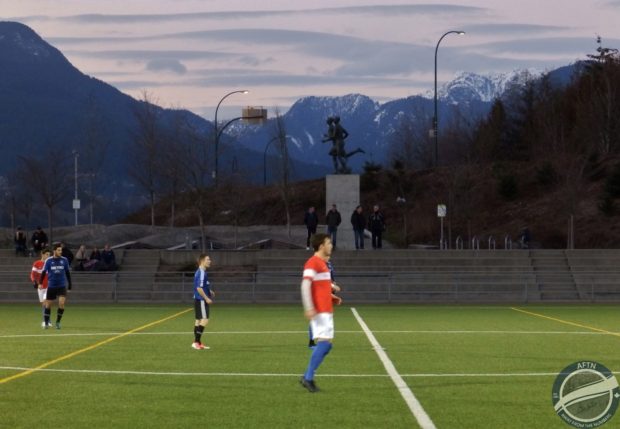 The pesky snow. February’s snowfall across the lower mainland had already meant that the Round of 16 matches in the 2019 Vancouver Metro Soccer League (VMSL) Imperial Cup were set to be played over a two week period. As the weather looked to have improved, and pitches were finally being cleared across the lower mainland, the quarter-finals of the tournament were all set to go this coming weekend. But then the snow returned on Wednesday night, postponing the final Round of 16 tie that was set to be played that evening and adding to the league and cup fixture headache the VMSL now faces with the Provincial Cup fast approaching.

Seven Round of 16 matches are all done and dusted though, producing 28 goals between them, lots of great action, a Division 1 team knocking off a Premier side, and a couple of close calls for cupsets along the way. By the end of it all, six of the top eight teams from the VMSL Premier have advanced, along with Division 1 side Rino’s Fury, while Rino’s Tigers and FC Romania now need to reschedule their match, with the last place in the quarters still up for grabs.

With the two cup finalists guaranteed a place in this year’s BC Provincial Cup, along with the top four teams in the VMSL Premier Division, the competition may be some teams’ only chance of making the A Cup this season, which should guarantee some highly competitive last eight action this coming Friday and Saturday.

This past weekend’s action got underway on Friday night, with VMSL Premier leaders CCB LFC United made to work hard to keep their double dreams alive, before eventually edging out NVFC Norvan 3-2 at Newton.

Milad Mehrabi had put CCB ahead just eight minutes in and that was how it stayed until four minutes before the hour mark when Connor Dennehy tied things up. The parity was just to last four minutes when Mehrabi put CCB back in front, and when Dzenann Bezdrob added a third with ten minutes to go, you felt that was it all over for the home side. Norvan had other ideas, however, and Matthew Hartwell made things interesting with three minutes remaining, but they couldn’t find another to take the game to extra time.

There was almost a shock at Ambleside on Saturday afternoon with West Van FC needing both stoppage time and extra time heroics to see off the challenge of Coquitlam Metro Ford Lupi, in a game that will leave the Division 1 side heartbroken at how things played out in the end.

Michael Mobilio had put the Lupi into a 12th minute lead, and as the match entered second half stoppage time, it looked like that was going to be the only goal of the game and the cup shock was on. But up popped Keith Jackson to fire West Van level in the 91st minute, sending the match into extra time, with Doug Joyce getting the 105th minute winner for West Van to leave the Lupi howling.

There was a cup shock of sorts for Lupi’s older brothers, as sixth placed Premier side Coquitlam Metro Ford Wolves knocked off title chasing Croatia SC 4-3 in a cracking match up at Empire Field North on Saturday evening thanks to a Carlo Basso hat-trick. 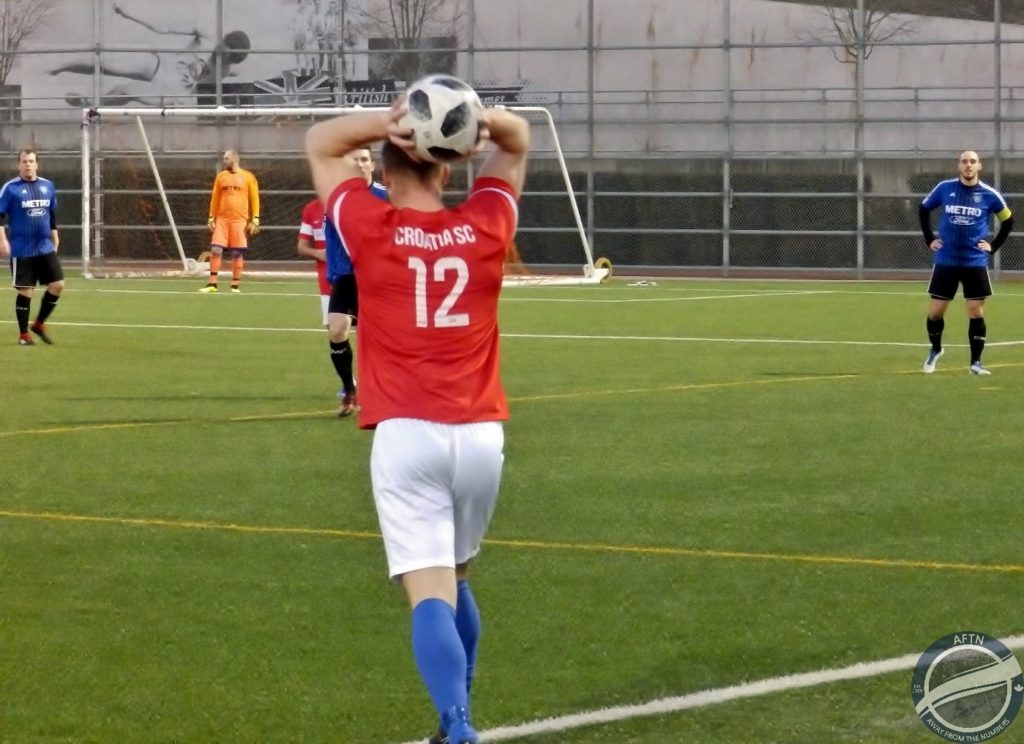 Metro Ford enjoyed the better of the first half possession and chances, taking the game to an understrength Croatia side that were missing the Malamura brothers from their starting line-up. It felt inevitable that Coquitlam would get the first goal, and they did, when Basso buried one from 12 yards out after the ball up in the box from what looked like a mishit shot.

That was how it stayed until half time and Croatia brought on leading scorer David Malamura to try and get themselves back into the match. It was Metro Ford who turned up the heat though and Basso grabbed his and their second of the night in the 55th minute when he ran on to a through ball, took a touch, and then blasted a fierce one past the keeper.

Six minutes later and it was 3-0 when Vito Iacobellis headed over everyone and in at the back post from the second phase of a corner. Game over? Not so fast.

Croatia came storming back and three minutes later Colin Jacques ran onto a long ball and lobbed one over the Metro Ford keeper from 20 yards out to give the home side some hope. Croatia had a couple of close calls from Malamura and Jacques, before Malamura raced in on goal in the 81st minute to finish from a tight angle to make it 3-2 and game firmly back on.

Croatia pushed hard for the equaliser that would take the game into extra time, and they had their chances, but they were caught on a quick counter a minute into stoppage time, and with men upfield, Basso was allowed to race in unmarked to pick up a cross and bury his hat-trick and secure Metro Ford’s place in the next round.

But that wasn’t to be the end of the action. A needless case of handbags threatened to boil over towards the end and then in the dying seconds Malamura was brought down hard in the box giving Croatia a penalty. David Zaharija stepped up to convert it with what proved to be the last kick of the game and end a cracking match that was the perfect tonic after just having watched the Whitecaps lose at BC Place to Minnesota United.

You can see our highlights from the match below, including six of the goals. I missed Croatia’s first as my fingers were too frozen to get the camera fired up in time!

Sunday saw two more Round of 16 matches played, with Club Inter EDC Burnaby having a comfortable time in seeing off Division 1 side NVFC Norvan Storm 5-0 at Empire Field. Liam Miller and Sebastian Crema had Inter 2-0 up within the first 12 minutes, and Rizal Ganief killed off any thoughts of a comeback with a third four minutes before the hour mark. Late goals from Abdulmalik Ali in the 84th minute and Edris Najm in the 90th sealed the win.

The weekend wrapped up with the biggest shock of the round, as a second half brace from Ryan Arthur saw Division 1 side Rino’s Fury beat already relegated Premier side Richmond FC Hibernian 2-0 on the Point Grey Turf.

With available cleared pitches proving to be a problem at the weekend, the round wasn’t set to wrap up until Wednesday night. Point Grey was the scheduled place of the action once again, but this time another snowfall left the pitch unplayable and covered in slush, postponing the meeting between Premier title chasers Rino’s Tigers and Division 1 side Romania FC. At the time of writing, no rescheduled date or venue has been announced, but it will surely take place at some stage this weekend as the overall fixture backlog continues to mount.

Three quarter-finals are now set, however, with the action set to go in two of the ties on Friday night and a third on Saturday (pitches permitting!). Here’s the line-up:

We also can’t wrap up our VMSL cup coverage without making mention of TSS FC U21’s who went to Langley on Saturday and came away with a 6-3 win against League runners-up Langley United.

TSS went 5-1 up before Langley came storming back, but a late securer on a counter attack sealed Rovers nerves and sends them through to a two-legged semi-final meeting with Faly Academy. The first leg is at Empire on Sunday afternoon (kick off 2pm), with the return leg at Minoru the following Saturday (kick off 6pm).