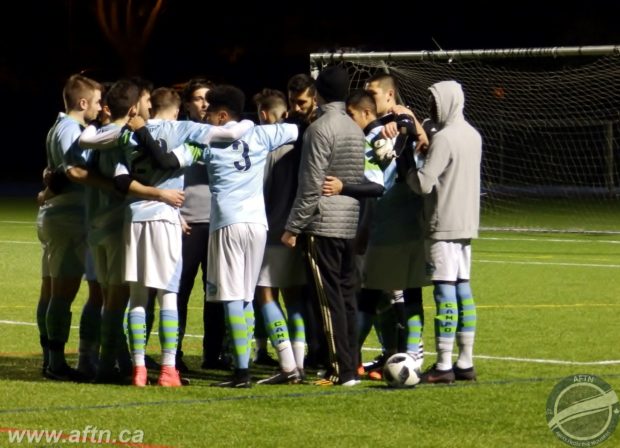 The Vancouver Metro Soccer League (VMSL) Premier Division title may have been wrapped up weeks ago, and the Provincial Cup berths sorted out earlier this month, but the relegation battle went right down to the wire with a dramatic last set of matches that saw three teams with ability to control their own fates.

Campo Atletico, EDC FC Burnaby, and Westside FC all had a chance to have a say in which division they would be playing their football next season, but in the end it was only Campo, in the last of the three matches, that were able to grab the opportunity provided to them with both hands.

The drama started at Burnaby Lake on Friday night. Third bottom EDC Burnaby has a chance to make sure of their Premier status next season with a home match to round off their season against a Coquitlam Metro Ford Wolves side with nothing to play for.

A win would have seen EDC leapfrog CCB LFC United in the standings, guaranteeing their survival. A draw would have meant a relegation playoff at the very worst. But they failed to rise to the occasion, going down to a 3-0 defeat and giving Campo a lifeline five days later.

It also gave Westside an unlikely possible escape route the following afternoon. A winless run of 12 matches, all bar one of them defeats, had seen Westside plummet to the foot of the Premier standings, but if they could carve out a win in their final match of the season at Rino’s Tigers, then they could potentially force a relegation playoff depending on Campo’s result on Wednesday.

And they got off to the perfect start, going ahead in the early stages, but that was to be as good as it got, and it was all one way traffic for Rino’s after that.

Three goals in the final seven minutes of the first half had Westside reeling. Matteo Polisi got the Tigers back on level terms in the 38th minute, before two goals in a minute from a couple of players who will be playing with TSS Rovers in the PDL this summer, Connor Glennon and Daniel Sagno, rounded off the half in style and had Rino’s 3-1 up at the break.

Another soon to be TSS Rovers player, Erik Edwardson added a fourth four minutes after the restart, before an Alberto Cirac-Perez goal on the hour mark and a second from Edwardson seven minutes from time sealed the 6-1 rout and sent Westside back down to Division 1 after their promotion two seasons ago.

That set the scene for a battle for survival at the Point Grey turf on Wednesday evening.

Campo Atletico knew a win would see them pull off the great escape and avoid the drop in their final match of the campaign. A draw would force a relegation playoff with EDC Burnaby. And a defeat would send them down with Westside.

Standing in their way were Rino’s Tigers, who had the chance of sending two teams down in the space of two matches, and they did, just not the opponents in front of them on the night. 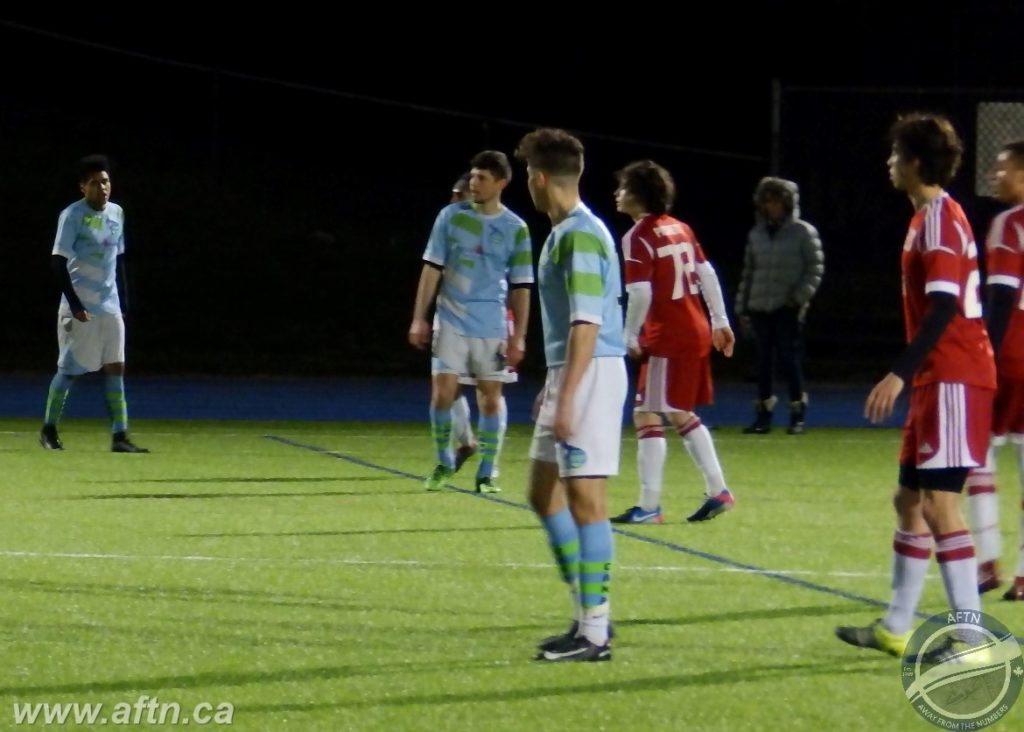 It was a depleted Rino’s team that took to the pitch, missing seven regular starters, and they played the first five minutes of the match with just ten men as they awaited their final player to arrive. They were so short that Rino’s Fury coach Derrick Freedman was named as the team’s only available sub. Sadly, he never made it on!

But despite their weakened state, Rino’s took the game to Campo, who were struggling to get any attack going, and it was no surprise when the Tigers took the lead just past the midway point of the first half. What was a surprise was the goalscorer, Omar Carim, who is the goalkeeper for Rino’s Division 2 Bulldogs team and was drafted in to play at the last minute, rising superbly to head home an Erik Edwardson cross at the back post.

With some of the EDC players watching to learn their fate, Daniel Sagno hit the crossbar from a free kick, and with Rino’s pushing, it would have been easy for Campo to buckle, but to their immense credit, they regrouped and got back on level terms just before half time when their leading scorer Edson Castro fired home his 10th of the season.

You felt it was all to play for in the second half and both teams pushed hard, as the action flowed from end to end, but the rest of the evening belonged to Campo’s Cristian Villatoro and Matias Guedes.

The young striker fired Campo ahead early in the second half, racing in on goal, rounding the Rino’s keeper and tucking the ball away with aplomb. He grabbed his second, and Campo’s third, six minutes later, tucking away a square ball from Guedes from seven yards out.

But Campo weren’t home and dry yet, and Rino’s made it squeaky bum time for the Burnaby side, with what may have been an own goal with just over ten minutes remaining.

Campo nerves were soon settled two minutes later, however, when Guedes fired home a low effort from the edge of the box to give Campo a survival achieving 4-2 victory.

A fantastic achievement from Campo in their first ever Premier campaign, and they’re making a habit of last day heroics, having achieved promotion in their last match of the 2016/17 season.

You can see all the goals (albeit some of them in a blurry state!), in our highlights video below. 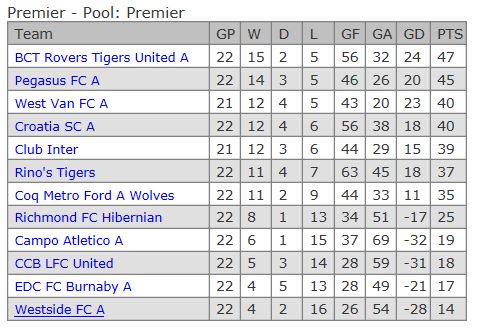 Huge congratulations to Campo. We’ve enjoyed watching them over the past couple of seasons and it’s great to see a newly promoted team stay up. To do so in the way they did, coming back from going a goal behind in that last match, was a fantastic way to wrap up our coverage of the league this season.

But we’ve still got a lot more to come in the Imperial Cup and Provincial Cups.

Also huge congratulations again to Premier Divisions champs BCT Rovers Tigers United. They were the class team of the league from the start and although they only ended up winning it by two points in the end, it was a lot more comfortable than that suggests due to results after the league was won.

Rovers Tigers will be joined in this year’s Provincial A Cup by both Imperial Cup finalists, Rino’s Tigers and Croatia SC, with Pegasus FC, West Van FC, and defending champs Club Inter, making up the VMSL’s six representatives.

Outside of the Premier, NVFC Norvan Lions lost just one match and dropped just four points all season on their way to winning the Division 1 championship at a canter. They finished 14 points ahead of second placed Guildford FC, who will join them in next season’s Premier Division after pipping ICSF Columbus by one point, securing promotion with a 4-0 romp at GN Sporting Club in their last game.

Richmond Royals and GN North Delta are relegated to Division 2 and will be replaced by Division 2A champs Coquitlam Metro Ford Lupi (who lost just one match all season) and Division 2B champs, and defending Provincial B Cup holders, Vancouver Greencaps, who also lost only one league match all season.

Strathcona United also only lost one match all season, but they were pipped for the Division 3A championship by one point by Westside FC Black Aces, who lost two games but also drew two less. West Coast Saints won the Division 3B title by five points, and rounding off a good year for the Irish lads, Vancouver Greencaps B won Division 3C by a point as it stands, but they have one match left to play.

Well done to all, and you can see all the final standings on vmslsoccer.com.