Much of the Vancouver Metro Soccer League (VMSL) league action was put on hold this past weekend as the first round of matches took place in the Imperial Cup and Division 2 Cup.

A couple of big cupsets led the way in the 105 year old Imperial Cup, as two VMSL Premier Division teams crashed out to Division 1 opposition.

The first upset of the weekend came at Burnaby Lake on Friday night, and it was one many people felt was on the cards as Division 1 side ICSF Columbus saw off the challenge of relegation threatened Premier team EDC FC Burnaby fairly comfortably. Columbus went ahead just two minutes in and doubled their lead midway through the first half. EDC pulled one back from the spot just before half time. Their fightback stopped there though and Columbus added a third in the second half to come away with the 3-1 win and set up a game at soon to be Premier champs BCT Rovers Tigers United in the next round. Not a great reward!

Burnaby Lake hosted another cupset on the same night, albeit of a lesser one between two Division 1 teams. Guildford FC, who look set for promotion to the Premier next season soon found themselves three goals down to Metro Athletic by half time. Metro’s form has dipped significantly these past few weeks, taking them out of promotion contention, but they got some revenge here, holding on to win 3-1 and set up a tantalising second round match-up away to Rino’s Tigers.

Another relegation threatened Premier side, CCB LFC United, enjoyed their respite from league action to see off Division 1 team FC Romania 6-3, in a high scoring affair on Friday night, while in the all Division 1 battle, GN Sporting Club beat Richmond FC Royals in the evening’s other game.

Saturday produced the other big cup shock of the weekend, although on recent form it was another one that was very much on the cards. Sitting bottom of the Premier with nine straight defeats, Westside were blown away 4-1 by Division 1’s Rino’s Fury.

Pablo Zubiria fired the Fury ahead in the 12th minute, before Dermot Raftery added a second from the spot seven minutes later. Rino’s also hit the post three times in the first half, as Westside had their chances but couldn’t capitalise on them. An own goal at the start of the second half pulled the Premier team back into it briefly, but a 70th minute goal from Placide Mountali-Oboua restored the Fury’s two goal advantage and quick counter from Leon Schilling three minutes later secured Rino’s upset win.

Rino’s reward is a home game with fellow Division 1 side GN North Delta, which could set up an all-Rino’s quarter-final.

The second round of the Imperial Cup takes place next weekend, and with at least two Division 1 sides guaranteed a quarter-final spot, there could be some more fireworks still to come.

The first round cup matches meant that the Premier Division action was reduced to just two matches, but it was a pair of games that could have some serious implications at the top of the table and in the battle for the six VMSL spots up for grabs in the fast approaching Provincial Cup.

Friday night saw Pegasus FC’s faint lingering championship hopes all but extinguished when they went down to a 2-1 defeat to West Van FC at Ambleside. A goal from leading scorer Keith Jackson and an own goal gave the home side all three points, moving them up to fourth in the table, and just one point now behind Pegasus, who got on the scoresheet through Whitecaps Residency alumni Yassin Essa.

This was the Horsemen’s make up game on long time leaders Rovers Tigers United, and they now sit eight points behind their Surrey rivals with just three games remaining. Rovers Tigers United need two points to secure the title and they’ll get their first chance of securing those when they take on Pegasus at Newton this evening. A win or a draw for the leaders and the VMSL Premier Division championship will be theirs.

West Van’s win goes a long way to securing their place in the Provincial Cup this season. The top four team automatically clinch a berth, along with the two Imperial Cup finalists if they haven’t finished in the top four already. If they have, then the 5th and 6th placed teams in the league will get a spot, so there’s a hell of a lot to play for over the next month.

Another team that made big inroads in getting to the Provincials are last year’s winners, Club Inter.

Inter put in a champions performance to come storming back for a 4-3 win at home to Croatia SC at the Memorial Park turf on Saturday afternoon.

A pair of goals from Emile Saimovici and another from UBC Thunderbirds’ Mihai Hodut had Croatia 3-1 up and coasting with around 20 minutes remaining before stunned them with three goals, including a 90th minute winner. Milad Mehrabi added his 10th and 11th goals of the season, including a stunning bicycle kick from a corner, with Marco Visintin and Milad Rahmati also getting on the scoresheet for Inter.

And all of that leaves the Premier standings looking like this: 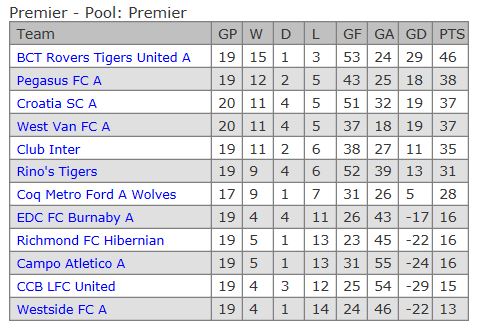 You can find all of this week’s fixtures, along with standings from all the divisions, on vmslsoccer.com.