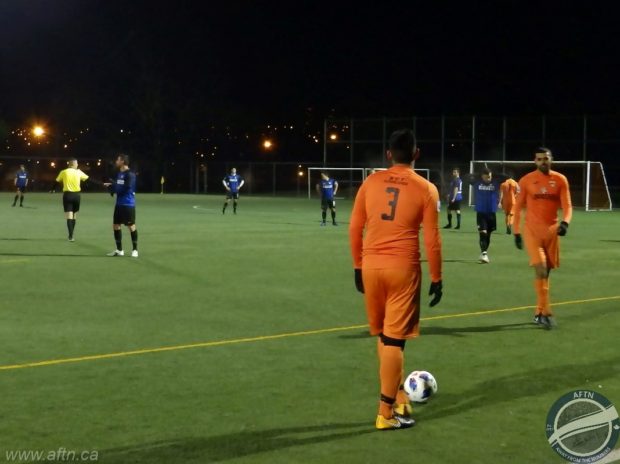 The twists and turns keep coming, and with the games fast running out, one point separates the top three, with two other teams still very much in the running.

Week 18 served up some cracking action, and it finished with a new team sitting in first place, as Croatia SC continued their steady form to leapfrog West Van, but with CCB LFC United breathing hard down their necks.

And while it may have been bitter cold off the pitch, but the action was red hot on it. 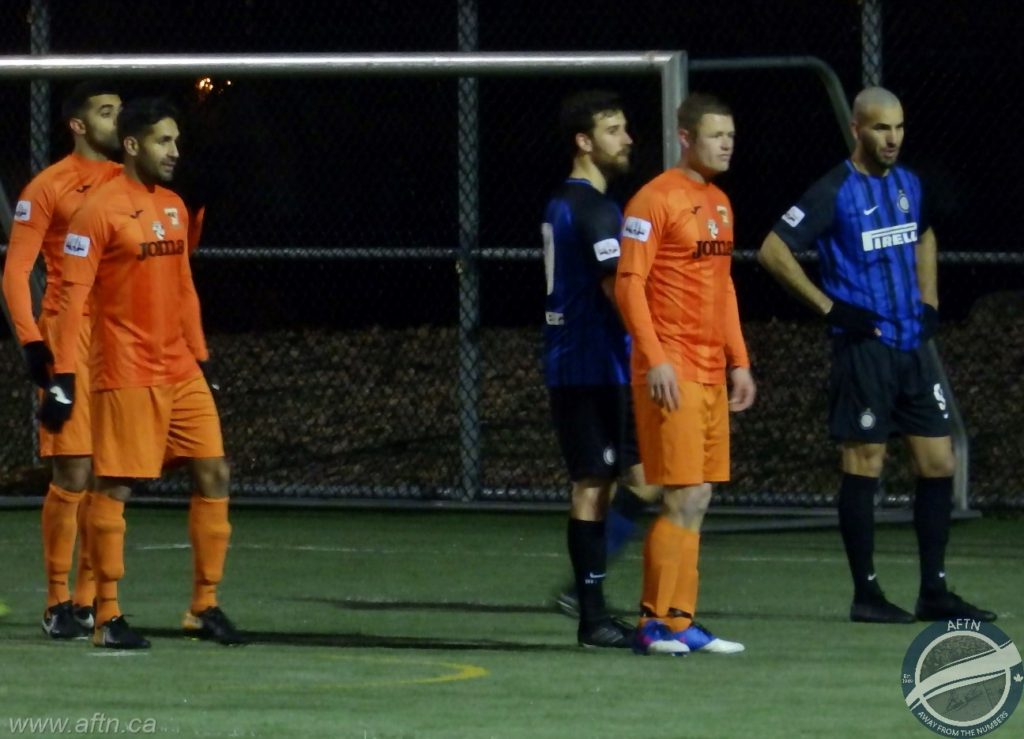 Rovers Tigers dominated the first half and should have had about five goals to show for all their pressure. They only had one though, a nice turn and finish from Nick Soolsma in the 16th minute. Despite their dominance, Inter could, and should, have tied it up just before half time but flashed an effort just past the left post.

I don’t know what was said to Inter at half time but they were a completely different looking team at the start of the second and really took the game to Tigers. It was wave after wave, with the Surrey lads either happy to soak it up and try and and hit on the counter or unable to get anything going. They were forced into a couple of saves, but were holding on to their narrow lead.

Then what looked like the game changing moment came when Inter’s Marco Visintin was sent off for dissent after being called for encroaching on an indirect free kick that had already been touched on to Soolsma. It was a second yellow (he’d just picked up his first for dissent to give away the free kick!) and off he went, pushing the ref and launching an expletive laden tirade along the way.

Inter were starting to unravel, questioning a lot of the ref’s calls, who, to be fair, was having something of a mare of a second half. Inter coach Moe Forouzan got a warning that one more word and he’d send him off. He said he was going anyway and left with more than a few choice words aimed at the offical!

It was looking like Tigers were set for the three points before, from out of nowhere, Rizal Ganief first timed a beauty into the top corner in stoppage time to grab a point for Inter. A lovely strike and well deserved on the balance of play.

You can see both the goals, and some of the other highlights from the match, in our video below. Pretty shitty quality though in general. Those Van Tech lights and orange strips are not a good mix for my crappy old camera!

Rovers Tigers were sitting six points out of first place but with two games in hand heading into this week’s matches and this looks like two massive points dropped in their chase to defend their Premier title.

But they weren’t the only ones to drop points this week, as leaders West Van were held to a 2-2 draw at old rival Coquitlam Metro Ford Wolves on Friday night and they needed a stoppage time equaliser to grab even a point.

Colin Phillips fired West Van into the lead from the spot in the 25th minute, but Carlo Basso tied things up two minutes before half time, heading home a free kick.

It was an entertaining, open game, with both teams creating some good chances, but thwarted by some fine goalkeeping and poor finishing. West Van fired one off the woodwork, as both teams pushed hard for the go-ahead goal, but it was the home side who got it with 15 minutes of the match remaining, after Andrew Peat breezed past a couple of West Van defenders to fire home.

That goal sparked a frenetic finish as West Van desperately tried to get back on level terms, but found a Metro Ford defence dealing with everything and managing the remaining minutes well.

But the title chasers eventually found the breakthrough two minutes into stoppage time when Phillips grabbed his second of the match and West Van grabbed what could be a massive point come the end of the season. Or a massive two points dropped.

Despite dropping those points, West Van temporarily held on to top spot, but it wasn’t to last long.

CCB LFC United moved into a share of the lead following their narrow 1-0 win at home to NVFC Norvan at Newton on Friday.

Nic Morello got the vital goal for CCB, who still have a game in hand and have the title firmly in their own hands right now, with five matches of their season remaining. The next two weeks look key for the Surrey side, but more on that later.

The last match on Friday was out in Richmond, with a Navkaran Bains goal giving Pegasus SFC the narrow 1-0 win over the home Hibernian lads.

Saturday’s action kicked off at Burnaby Lake as the no longer pointless Campo Atletico looked to build on last week’s draw at home to old foes Rino’s Tigers. 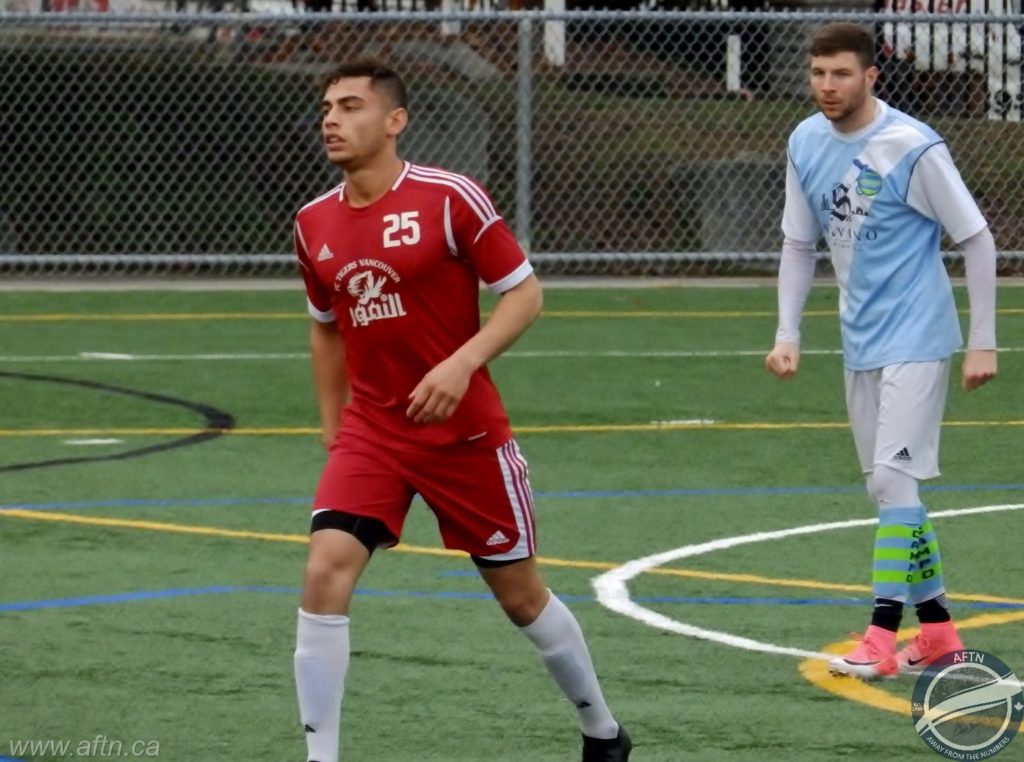 Were Campo about to launch their own version of the Great Escape, even better than last years? Not on this showing!

A rampant Rino’s side tore Campo’s struggling defence apart and were four goals up by the 17th minute. By full time it was an 8-0 scoreline, but with three disallowed Tigers goals and a slew of close calls and missed chances, this could have been even uglier.

Declan Rodriguez got the scoring underway just three minutes in, collecting the ball on the edge of the box before firing. Rino’s doubled their lead four minutes later when Rodriguez headed home a corner. Connor Glennon made it three in the 13th minute, finishing a Rodriguez cutback.

Glennon turned provider four minutes later, squaring the ball to John McEown in the box, who tucked it away for 4-0, and despite Tigers’ non=stop pressure, that was how it stayed till half time.

The second half was as equally one-sided. Kristian Yli-Hietanen tapped the ball in from close range an hour before the hour mark, then Andrew Devlin did the same at the back post two minutes later. Tomi Fagbongbe made it seven with 10 minutes remaining from the spot, before Devlin grabbed his second of the match in the 84th minute with a header from a few yards out.

You can see all the goals (although just the tail end of the second one), and some other highlights, in our video below.

That win keeps Rino’s in touch at the top, but they need to likely win out and get a bit of help elsewhere if they are to land the Premier prize they desire.

A team in a far better position, however, are Croatia SC, who took over top spot thanks to a hard fought, late 1-0 win at Guildford FC on Saturday night. David Malamura struck in the 78th minute to secure Croatia all three points and first place with four matches of their season remaining.

The Premier action for the week wasn’t quite over yet though as Guildford were in action again on Tuesday night, as they headed to NVFC Norvan to complete 47 minutes of a match abandoned earlier in the season.

The score was tied at 0-0 when they resumed, and that was how it was to finish as the game was played out. Not the most exciting action, but a huge point for Guildford, who now move one point ahead of second bottom Richmond FC Hibernian in the battle to avoid the drop.

And after all of those Week 18 matches, the VMSL Premier table now looks like this. 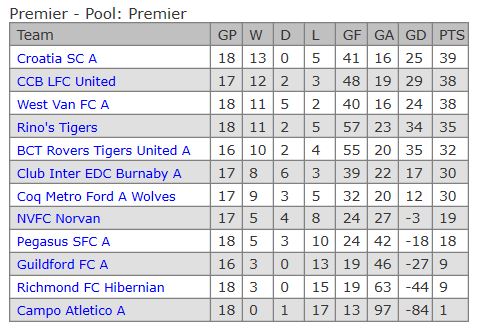 It’s going to be an absolute fantastic run-in to the season.

With five games left, CCB are in pole position, but they have three season defining matches coming up over the next three weeks. They kick those off at Newton this coming Friday, when they take on defending champs BCT Rovers Tigers United, who also desperately need the win. That’s followed up with a home game against West Van next week, and then they travel to take on Croatia the week after that.

Some absolute crackers in the making, so get out and take in some of the action if you can.