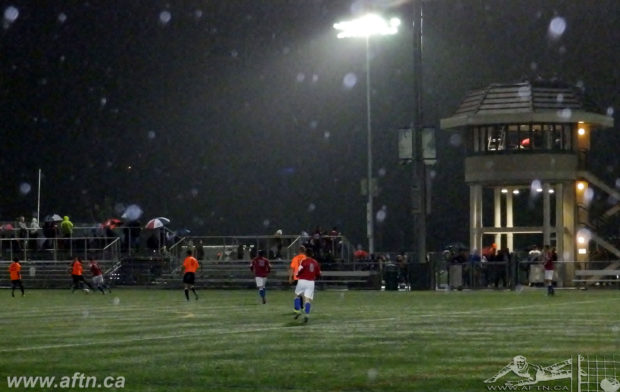 The action’s already heating up throughout all the VMSL divisions, with some clear teams to watch now starting to emerge after the Week 3 matches.

Carlo Basso and Vita Iacobellis continued their goal a game start to the season for the Wolves, taking their tally to three apiece from their first three matches. Sang Hwang and Juan Sanchez got Coquitlam’s other goals on the night, with Amara Toure getting the lone counter for the Burnaby side.

The win kept Coquitlam at the top of the standings, with a maximum nine points from their three matches, and leaves the Chileans as the only club yet to get a point this season and rooted to the foot of the table.

West Van are the team currently keeping pace with last season’s double winners, coming away with a 3-2 away win in Surrey against Provincial Cup winning Pegasus on Friday night, to keep within two points of the leaders at the top of the Premier.

Mohammed Habib grabbed his third of the new season for West Van, with Jesse Fetterley and Michael Winter also finding the scoresheet, and Javid Khan hitting a brace for the Horsemen.

We took in a chunk of the other Premier game to be played on Friday, as Croatia SC and Rovers Tigers United fought out a fast-paced and entertaining 2-2 draw at Burnaby Lake.

It was a pretty even game from start to finish with Nick Soolsma grabbing his fifth of the season for the Tigers before Joey Brar headed them into a 2-1 lead late on. They looked to have secured all three points before Croatia pushed hard in the closing minutes and finally struck back to level things up again deep into stoppage time, with virtually the last kick off the ball. Emile Saimovici and Agron Bajraktari getting Croatia’s goals on the night.

You can see some rather crappy video of the last two goals of the game below. Really need a better camera if we’re going to try and do this at night games! But at least our spidey senses to switch it on at the right time to capture something worked out!

With Club Inter’s game with Richmond Hibernians being postponed, ICSF Columbus bounced back from last week’s heavy defeat by Croatia to see off North Delta SC in the only Premier game on Saturday.

Columbus were leading 1-0 when North Delta were reduced to ten men a minute before half time, after an attempted bicycle kick went wrong and led to a straight red card. Columbus made their man advantage pay, adding two in the second half. Jin An, Tino Cucca, and Daniel Johnson got the goals.

Westside rounded off this week’s Premier action, grabbing their first win, and points, of the season in a 4-0 trouncing of Pacific United on Sunday up at Musqueam, thanks to a brace from Han Sol Kim, one a cracking free kick, and goals from Ryan Arthur and Byunghan Im.

Those results leave the VMSL Premier table look as follows after Week 3: 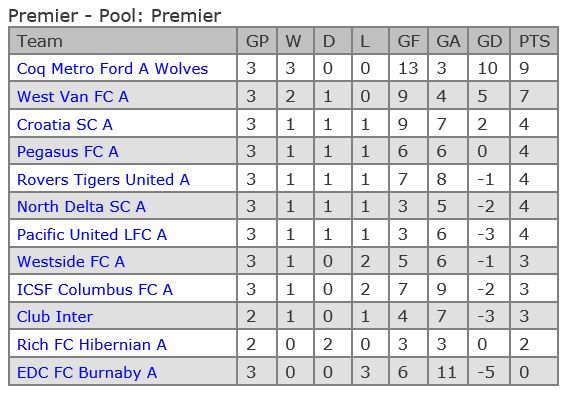 Binger’s Army continue to lead the way in Division 1 after Aaron De Jong’s goal game them a narrow 1-0 win at home to Metropolitan and kept their 100% start to the season intact.

Binger’s sit on nine points, and there’s a real logjam developing behind them, with four teams on six points after some entertaining weekend action.

The Division 1 match of the week came at Burnaby Lake on Saturday afternoon when Campo Atletico fought back from going behind to two early goals in the first ten minutes to see off Rino’s Tigers 4-3. Campo tied it up at the half before taking the lead, only for the Tigers to come back and tie things up themselves. With the game heading for a share of the spoils, Campo then came up big in stoppage time to claim the win and move to fourth in the table, level on points with second placed Tigers.

The other big Division 1 game of the weekend saw Rino’s Fury lose their unbeaten record going down 3-0 to CCB Guildford, a win which moved the Surrey lads up to third and dropped the Fury to fifth, with both teams on six points from their first three matches.

At the other end of the table, Akal forfeited their third straight game, this time to FC Romania. Their future looks bleak and a decision needs to be made soon as to what is happening with them.

It’s an embarrassing and unacceptable situation, with teams currently earning what could be crucial three points in the battle for promotion and relegation come the end of the season. If they start playing now, it’s unfair to the rest. If they don’t, then the league has to play with a team short and a Division 2 team that could have been promoted miss out.

Will definitely be interesting to watch how this one plays out. They’re scheduled to host Campo Atletico at Newton on Friday night. Another forfeit sends Campo to joint top of the table, boosting their goal difference with the awarded 3-0 win in the process. It’s a mess. 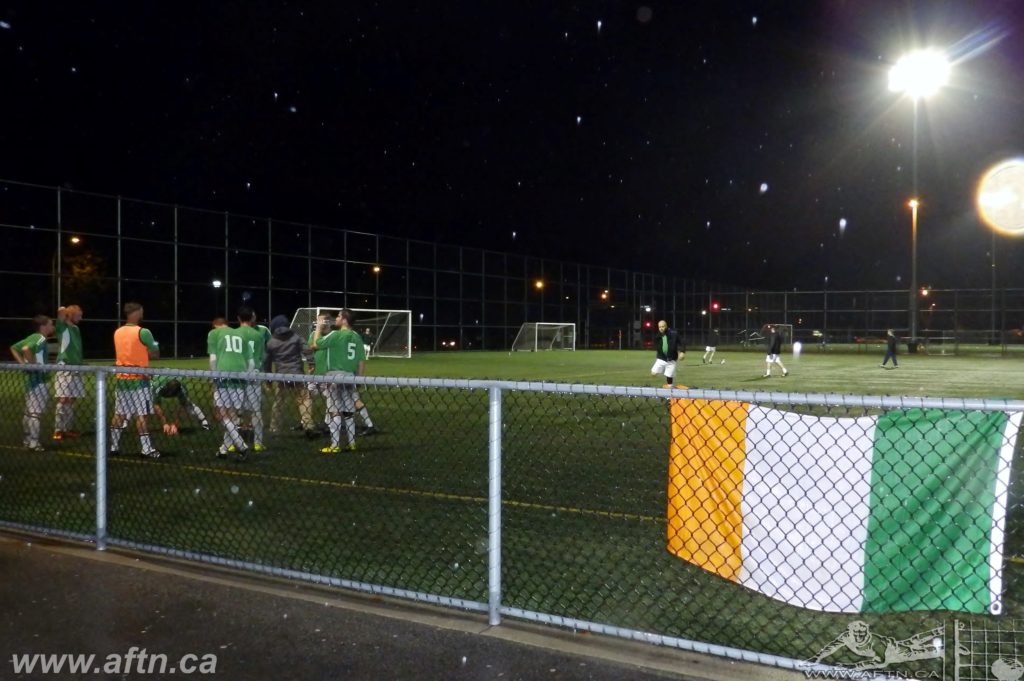 We headed to Burnaby Lake on a wet Friday night to take in the Division 2B action between FC Serbia United and Harps FC, in what was certainly a feisty affair that felt like it was going to boil over any minute, both on the pitch and the sidelines.

Both sides were unbeaten heading in to the game, with neither team conceding a goal. Serbia were missing former WFC2 player Jovan Blagojevic, who was getting married the next day, and any first half chances were being fairly easily handled by both defences in the horrendous conditions.

Scoreless at the half, the game burst into life just minutes after the restart with Harps taking the lead after some defensive confusion was punished. Serbia fought back and levelled things up midway through the half (you can see the goal below) with a fantastically worked team goal that ended with a sweet finish, although the goalkeeping is certainly questionable.

Tempers rose in the closing minutes and as the game looked to be heading for a draw, Harps scored their late winner on a quick breakaway and lovely lobbed finish over the keeper from 20 yards out.

The 2-1 win keeps Harps unbeaten for the season and moves the Celtic lads to the top of Division 2B on goal difference from Bombastic.

Twin Arrows keep the only 100% record in Division 2A after their 3-1 win over Euro FC on Sunday.

In Division 3, VAFC Celtic and America FC have the only unbeaten and 100% records remaining in pool A, with Cliff Senior Cobra leading the way in pool B, and Coquitlam Metro Ford Lupi and Strathcona United unbeaten at the top of pool C.

There’s some good matches all over the lower mainland this Friday, Saturday, and Sunday. Get out if you can. We’ll be at a couple and you can find the full weekly schedule HERE.