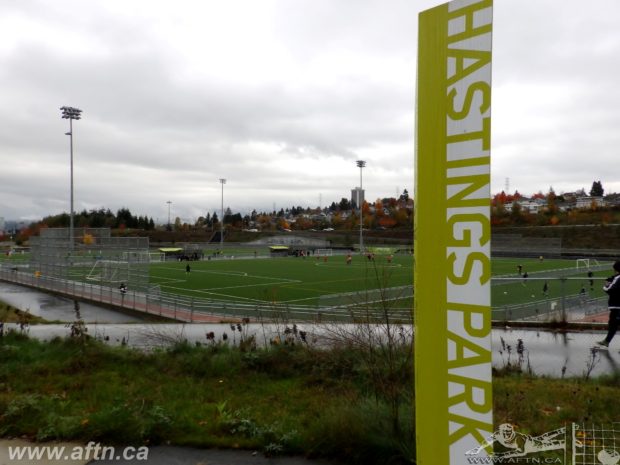 The runaway train that is Coquitlam Metro Ford Wolves kept on track to back to back VMSL Premier Division titles this past weekend, increasing their lead at the top of the table to six points over West Van, with a game in hand.

Coquitlam made it seven wins from seven matches, maintaining their 100% percent record with a comfortable 3-0 victory over Croatia SC on Friday night thanks to a Carlo Basso brace and a goal from Luigi Polisi.

While the Wolves were tearing apart their opponents, West Van were dropping two points at home to Rovers Tigers United following a 1-1 draw at Ambleside that kept the teams second and third in the table, falling further behind Coquitlam a third of the way through the season.

At the other end of the table, Croatia’s loss to the league leaders keeps them second bottom, tied on points but with a better goal difference than newly promoted ICSF Columbus, who lost out 4-2 to EDC Burnaby on Friday.

The other promoted side, Westside FC, kept up their good run of recent form making it back to back wins with an impressive 2-1 victory at the struggling Provincial Cup Champions, Pegasus FC, thanks to goals from leading scorer Han Sol Kim and Marcos Teodoro da Silva. Javid Khan got the goal for the Horsemen, taking his tally to the season to six.

The big movers of the week were Club Inter, whose four points in four days saw them move up from eighth to fourth in the standings. 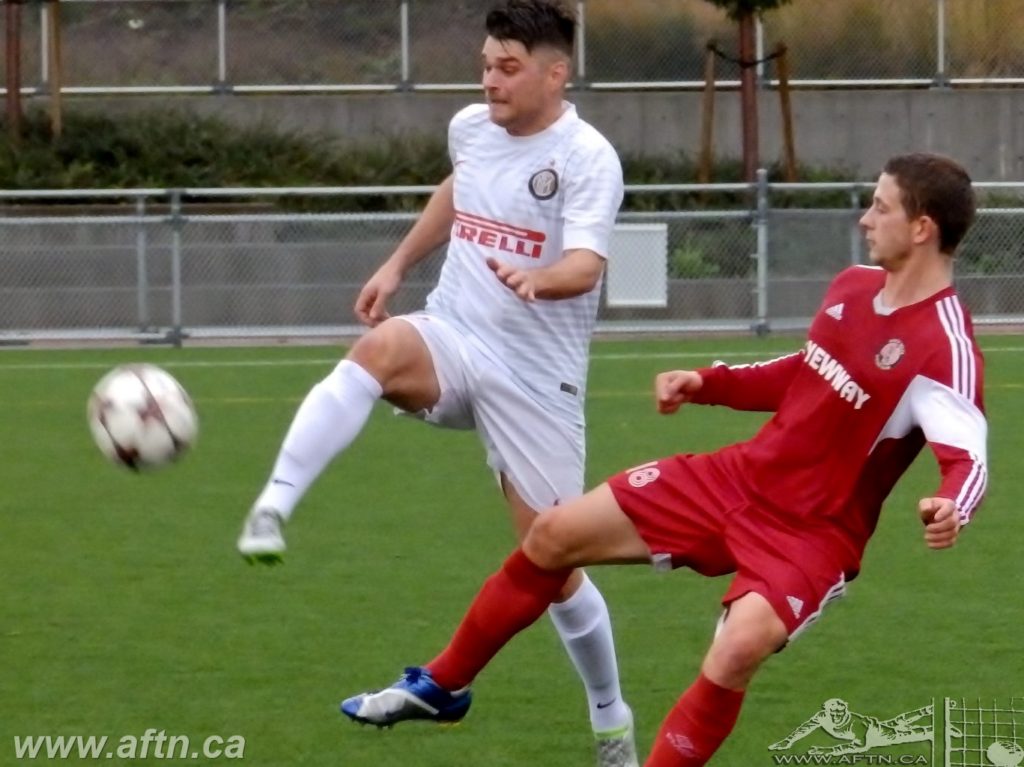 Inter grabbed all three points in Wednesday’s make up game at home to Richmond Hibernian, coming away with a 3-1 win thanks to two goals from Milad Mehrabi and one from Michael D’Agostino.

They followed that up by fighting back from falling a goal behind to North Delta SC at a sodden Empire Field on Saturday to claim a point in a 1-1 draw, thanks to a Reece Miles header off a corner, which you can see below.

The other Premier match this past weekend saw Richmond Hibernian come away with a 2-1 win at home to Pacific United, all of which leaves the VMSL Premier table as follows after Week 8: 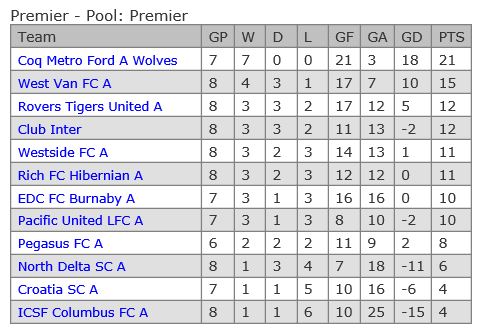 With NVFC Norvan Lions having a bye week, we have new leaders in Division 1, in CCB Guildford.

The previously second placed Surrey side were made to work hard for it in coming away with a 2-2 draw at Metropolitan on Sunday. That win moved them level with Norvan on 14 points but with a better goal difference of six goals.

The second Rino’s derby of the season took place on Saturday with the Fury getting the better of Vancouver SC 3-1, with the latter also having a man sent off.

The Division 1 match of the weekend came as former leaders Binger’s Army got back to winning ways, moving to within three points of the leaders, following a testy 3-2 win at home to Campo Atletico that saw both teams have a player sent off and Binger’s grabbing the winner in injury time. 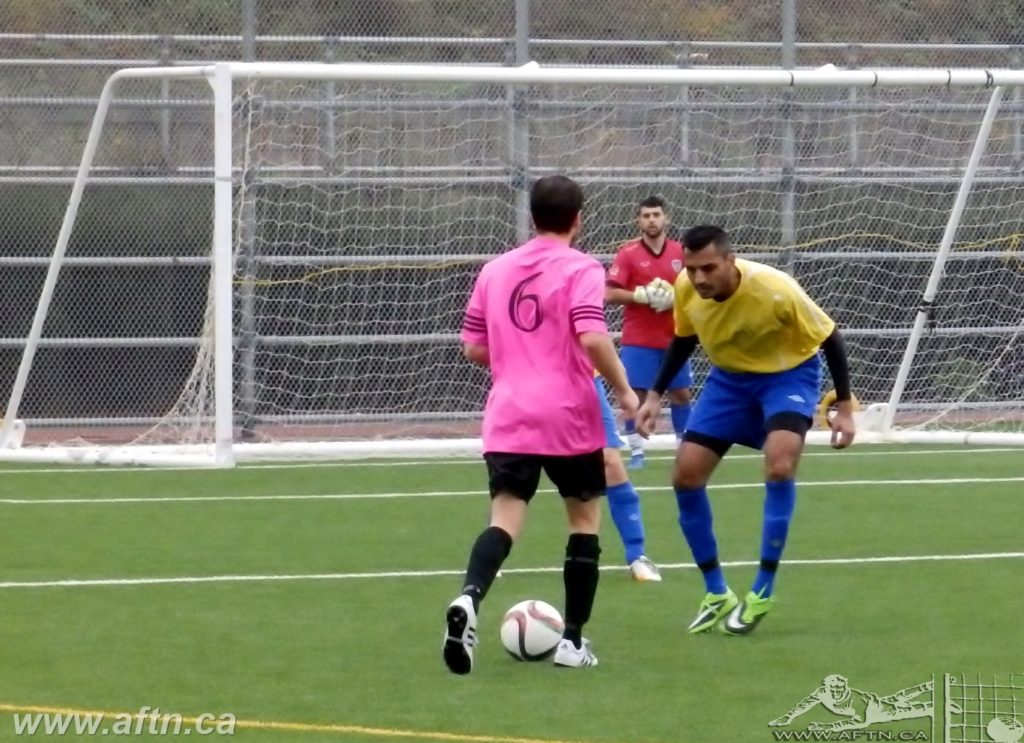 There’s very little to separate the top three sides in both Division 2A and 2B, in what has been an entertaining start to the season.

13th Legion moved back to the top of Division 2A with an emphatic 8-0 hammering of PCOV Europa up at Empire on Saturday. The goal rout boosted 13th Legion’s goal difference considerably, giving them the top spot over Burnaby Metro Athletic by four goals, after the Burnaby side saw off BCT Punjab Hurricanes 2-1 in Surrey on Friday night.

Last week’s leaders Sarajevo FC were shocked 1-0 by Euro FC at Burnaby Lake on Saturday afternoon, falling to third spot in the table, two points behind the top two.

We took in the second half of both 13th Legion’s match and Inter’s, and caught what we think was the 8th and final goal by the Legion.

The top three remain unchanged in 2B even though none of the teams got a win at the weekend.

Shaheen FC continue to lead the way after a 0-0 draw at third placed Harps, while Gastown FC’s match at Meraloma was called off due to a waterlogged pitch.

The top two teams in Division 3A, America FC and Royal City SC, battled it out to a 2-2 draw in New West on Friday night, while Bosna SC stayed out on top of 3B after a 5-2 win at B United on Wednesday evening.

The biggest win of the weekend came in that division with Marpole Vancouver Tropics hammering last placed GFC United Lions 13-0 on Saturday. The Lions remain pointless with a goal difference now of minus 48.

There was another big win for Division 3C leaders Coquitlam Metro Ford Lupi on Sunday night, coming away with a 9-1 win over NVFC Norvan Vikings. That’s only the third goal Lupi have conceded all season, taking their goal difference to plus 44.

If you fancy taking in some local soccer this weekend, then you can find the full VMSL schedule HERE.