Vancouver Whitecaps’ new management team wrapped up their evaluation camp this morning with a little bit of training and a 9 v 9 intrasquad match at Burnaby Lake, played over two 35 minute halfs on a shortened pitch.

A number of players sat out the game and took in proceedings from the sidelines, but the focus was clearly on having a final look at the younger and more inexperienced guys in particular.

At least there were goals this time, unlike Saturday’s dreary scoreless game, but still none from any actual striker!

It was the clichéd game of two halves, with the Blues racing into a two goal lead at the interval thanks to a Michael Nanchoff drive which deflected in off Michael Boxall, and a goal from Shea Salinas, who was in open space to finish off a Jordan Harvey set up from a great Nanchoff cross.

There was only one change at the half, with Camilo coming on for Jonathan Leathers, but not being asked to play right back. Not yet at least!!

The Whites hauled themselves back into it, seven minutes after the break, with an Alain Rochat rocket of a long range free kick giving Jay Nolly no chance.

The game was all tied up with seven minutes remaining, when Gershon Koffie buried a shot from the edge of the box into the top left hand corner. Nolly got a hand to it, but had no chance of keeping it out.

With a winning mentality already clearly in place under Rennie, the players took the game to a penalty shoot out to decide the winners.

So who was the unfortunate player for the Blues player to miss? Watch how the penalties played out below to find out…

Yup. It just had to be Mustapha Jarju! He can’t even score a penalty if he’s wearing a Whitecaps top.

It was to be three penalties each and the Whites ran out eventual 3-1 winners. Long Tan’s cheeky chipped penalty was particularly nice. 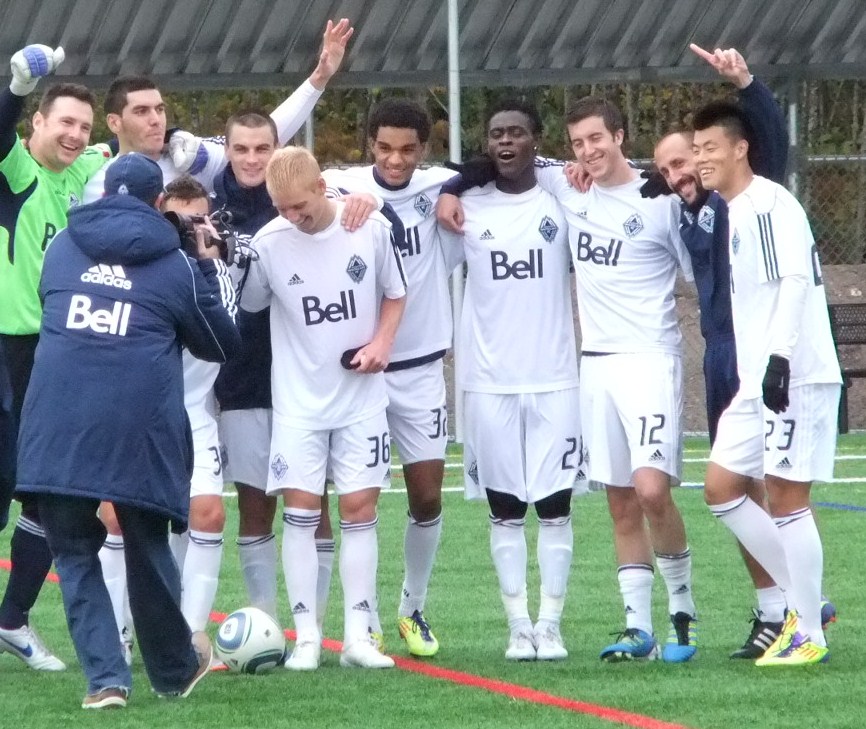 As the Whites gathered for a celebratory team photo, the Blue players joked with Jarju that he should get in the photo since he won them the game! Don’t you just love the guy?!

It was great to see the team spirit of the squad. A lot of joking around at the end, but totally focused on the win during the seventy minutes. Jeb Brovsky in particular was treating the game like it was a Cup final at times.

So what did Martin Rennie make of today, and the week as a whole:

“Overall, it’s improved as the week’s gone on and I’ve enjoyed getting to know the guys. I think they’re very respectful and responsive to everything that we’ve asked them to do and that’s a very important thing.

They’ve worked very hard, considering it’s the end of the season, which is often difficult.

I’ve enjoyed it and it gives me a clearer idea on what we have to do to make the team better and I’m excited about being able to do that.”

Today was not just the end of the evaluation camp, but also the last training action for the Whitecaps this year, with the players now going on an extended break until January.

As the focus of the management team now turns to the various drafts coming up, for some players, today would be the last time that they will have been wearing a Whitecaps jersey.

There were few standouts during Saturday’s game, but today was a different story.

Russell Teibert was the best player on the park over the seventy minutes. He’s been looking sharp in training all camp and has showed that despite falling out of favour under Tommy Soehn and through injury, he clearly has a very bright future at the club and the Whitecaps will be all the better for that.

We need all the Canadian talent we can get and Teibert is certainly that, as is Bryce Alderson. 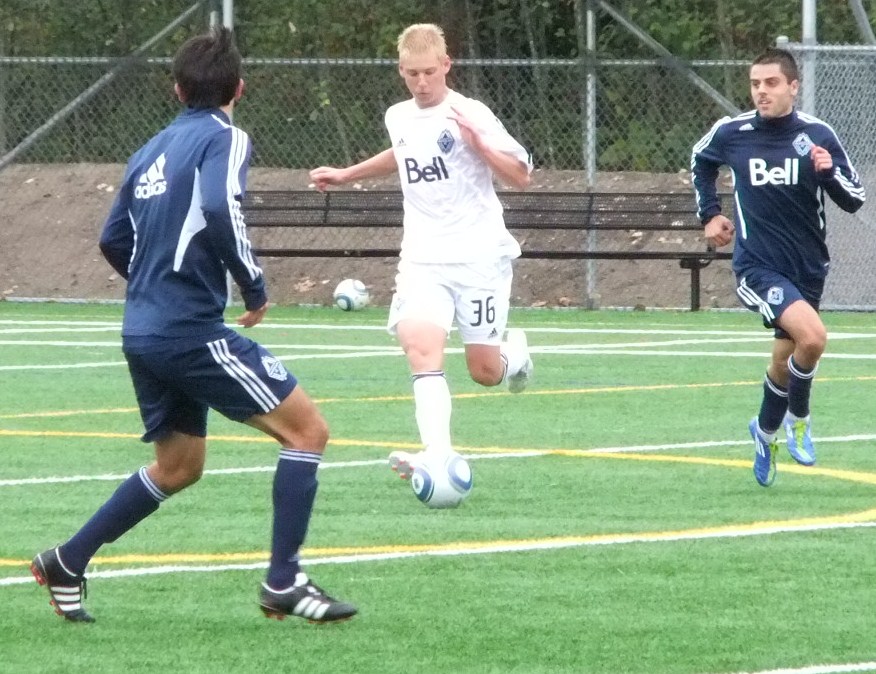 Alderson impressed again as well and has maturity beyond his years in the middle of the park, giving advice to Koffie at times on positioning.

With both players already protected with homegrown status, we expect the pair of them to feature heavily in Martin Rennie’s plans for next season.

Another already protected player, Michael Nanchoff, had a good day as well. Apart from scoring one goal and making another, he was all over the park and showed the potential AFTN feels was not properly nurtured in his rookie season.

Long Tan, Ben Fisk, and to a slightly lesser extent, Caleb Clarke, struggled to get into the game all that much today.

Fisk and Clarke will probably be at least another year away from breaking into the full MLS squad, but I would expect them to continue their development in the reserve league matches next season. Tan’s tackling lets him down at times. Whether he was just loathe to fully commit on team-mates, I don’t know, but it didn’t stop others.

Camilo showed the class he has in the brief time he was on the pitch, but again Jarju disappointed and struggled to hit the target. If he doesn’t have a no trade clause in his contract, then he needs to be left unprotected for the expansion draft. Not that I could see anyone actually picking him up in any draft.

So who will be the eleven to be protected? Martin Rennie has already made his mind up on that, but wouldn’t be drawn on any names.

Eric Hassli will obviously be protected. So our other two choices would be Jay Nolly and Long Tan.

I’d love to keep Joe Cannon around, but with his salary hit, age and outspoken ways, I can’t see him being in Vancouver for 2012.

I also can’t see any of our unprotected guys being snapped up by Montreal, even to spite us. If they did, it’s their loss! I’m pretty sure they’ll stick to picking up ten players from winning teams though.

So for the unprotected players, it is now a case of playing the waiting game.

Players won’t find out if they’re protected or not too early, as Rennie doesn’t want to tip other teams off. They’ll hear “a day or so” before the November 21st cut off date, when the Caps have to let MLS know who is on their list for the draft two days later.

There is unlikely to be any squad changes before this date for the unprotected players. For those who aren’t selected in the expansion draft, they then have the anxious wait to see if they will be figuring in Martin Rennie’s plans going forward.

Rennie told reporters that once Montreal’s picks have become clear, “then we can tell players much more clearly what our plan is.”

The players may be getting time off, but the really hard work is only just beginning behind the scenes.

There is a trade period, where Rennie may be keen to offload some of the more experienced Caps for other current MLS stalwarts. AFTN is still expecting to see a move made for Houston midfield dynamo Adam Moffat.

Then comes the two part re-entry draft on December 5th and 12th. Teams will select players from an eligible list that functions as a traditional waiver draft for clubs to bring in new talent from fellow MLS clubs and the Caps have the first selection in both parts. 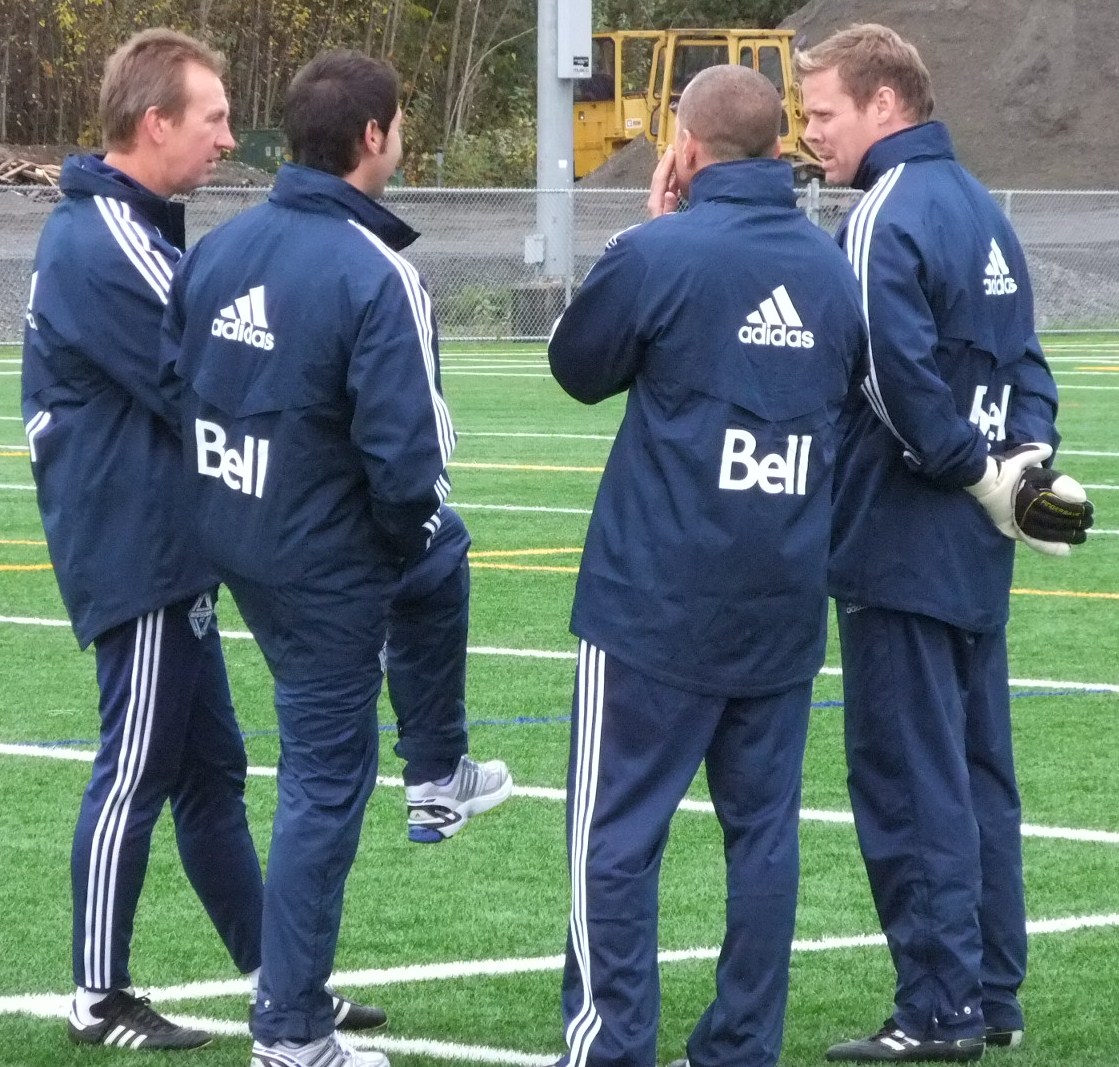 Entering 2012, Whitecaps FC technical staff will participate in the five-day MLS Combine in Fort Lauderdale, Florida, in preparation for the 2012 MLS SuperDraft, which occurs on January 12th in Kansas City, Missouri.

Only five days later, the Caps will take part in the 2012 MLS Supplemental Draft, which occurs on January 17th. This draft functions as a continuation from the MLS SuperDraft, and will take place via conference call, with Whitecaps FC also selecting in the second overall position of the four-round draft.

So just how will Martin Rennie approach this busy time ahead?

You get the sense that it’s going to be a hectic and exciting close season.