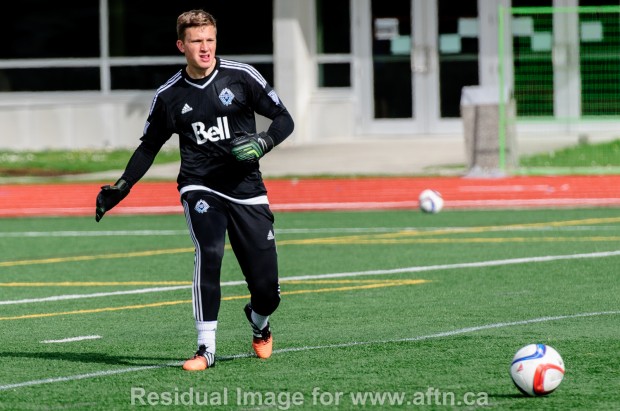 Of all the conveyor belt of young talent that Vancouver Whitecaps’ Residency program has produced recently, the goalkeeping position appears to be the gift that keeps giving.

There’s been some impressive Residency graduates the past couple of years in the shape of Callum Irving (currently in top form in the NCAA at Kentucky), Sean Melvin (currently in NCAA at North Carolina), Nolan Wirth (currently in NCAA with Oregon State) and Marco Carducci (now on the ‘Caps MLS roster). Still within the system you have the U16 talents of Aidan Aylward and Luciano Trasolini coming through.

The reality of it is, so much talent, so few opportunities for them to play with the Whitecaps in the future. It’s the nature of the position. Only one can play, just ask Paolo Tornaghi. It’s impossible for all of these guys to come back and be ‘Caps players again, even with the new USL team.

With all that in mind, it was somewhat surprising that the Whitecaps selected a goalkeeper in the latter stages of this year’s MLS SuperDraft. It certainly wasn’t a position that needed filled on either the MLS or the USL squads, but in Spencer Richey, Vancouver saw a player that was simply too good to pass up. 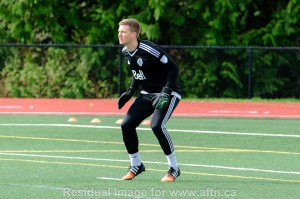 Washington Huskies goalkeeper Richey was widely tipped to be taken pretty early on in the draft, but as things played out, the Whitecaps were able to get him with the penultimate pick of the third round, 61st overall.

“I spent five years down at the University of Washington,” Richey told AFTN. “It was an awesome experience. I’m super thankful for the staff and what that program did for me and for my soccer abilities especially.

“Going in to the draft I didn’t have a ton of idea where I was going to end up, which was kind of part of the fun of it.”

The fact that it ended up being the Whitecaps that selected him came a something of a surprise to Richey. The ‘Caps hadn’t been one of the clubs that had shown interest in him going in to the draft, although they had previously brought him up to Vancouver for some training time.

“I came up here a few years back, right when Marius [Rovde] got here, but the rest of the staff wasn’t here yet. So that was the only history or kind of communication. That was the last time I spoke to them, so it was a bit of a surprise in a totally positive, good way.

After a string of strong showings with an increasingly successful Washington side in NCAA, which saw them ranked number one in the nation for a time last year, a pro career was always looking on the cards for Richey. He’d represented the US at both U17 and U20 level and had played at the 2009 U17 World Cup. Things were looking rosy, but it wasn’t to prove to be a smooth journey for the young keeper, as a leg break four games into his senior season with the Huskies derailed plans.

Richey was forced to sit out the remainder of the 2013 NCAA season, as the Huskies made it to the Elite 8 stage of the College Cup, only to be knocked out by Ben McKendry’s New Mexico Lobos, in a game that saw the Residency alumni, and now teammate of Richey, score the only goal of the game on a bitterly cold December night in Seattle.

Richey watched from the sidelines as he continued to recover from his injury, and he was soon faced with a tough decision. Did he head into the 2014 MLS SuperDraft as planned or go for a redshirt season and repeat his senior year? The lure of the pros and still entering the draft crossed his mind, but in the end he decided that wouldn’t be the best move for his future career.

“I thought about it,” Richey admits. “Jamie Clark, our head coach down there, is big on evaluating all your options. We sat down and chatted about it. I actually got invited to the combine, even though I was nowhere near healthy enough to participate in it. So it was something we thought about.

“But, especially as a goalkeeper, you’re not in a big hurry to get to the next level. You’re not in a race against your prime so to speak. With a goalkeeper you’ve got a little bit of a longer career, barring injuries and things like that. We thought it was the right choice to come back and rehab properly and play my 5th year down there and I’m glad I did.”

All that’s in the past and Richey’s professional career is now underway in Vancouver and it was evident from the early days of preseason camp that not only had the Whitecaps acquired a talent, they liked what they saw. Richey was officially added to the WFC2 roster last week and will now battle it out with Carducci for starting minutes in USL this season. 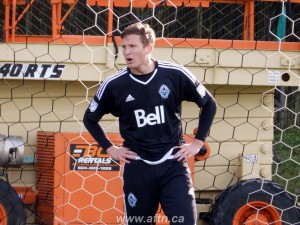 The Whitecaps are keen for both keepers to fight it out, and constantly push and test each other throughout the season. It’s likely that they’ll each share significant playing time between themselves.

Heading into his first pro environment, it’s a challenge Richey is looking forward to and one which he feels will be beneficial to both keepers and the ‘Caps in the long run.

“It’s something we’ve talked about and from the sounds of it, Marco and I will be down there quite a bit together,” Richey revealed. “From everything I’ve understood, they think the best goalkeeper will play, which is awesome to hear. Coming in as a new guy, all you want is a shot to compete and a shot at playing time.

“Marco’s a really quality goalkeeper, especially for how young he is, so I’ve been pretty impressed by him. It’ll be fun competing for minutes and I’m sure it will make us both better.”

Richey’s journey to the Whitecaps is an interesting one, especially as landing in Vancouver now puts him in the unique situation of playing for all three Cascadian clubs.

A Seattle native, Richey turned out for the Sounders in PDL action in 2010 and 2011, before heading south to play for the Portland Timbers U23 side in 2012, where he played alongside Erik Hurtado, in front of some large crowds. He’s now completed the Cascadia trifecta.

“It’s kind of funny,” Richey told us. “At my school we had four guys that went pro this past year. Two to Seattle, one to Portland and one to Vancouver, so that was kind of a crazy coincidence. I’ve had a fun ride these past five, six years. Kind of bouncing around. I’m trying to get different experiences.

“Down in Portland, it was an awesome summer. Probably my best PDL experience. They take it really seriously and it’s a good program down there. It’s pretty wild [with the crowds they draw]. You wouldn’t know it was a PDL game unless someone told you. Like I said, trying to get as many different experiences, in as many different environments as possible, can only help in the long run.”

Different, but similar environments, for after being born and raised in Seattle, Richey has found himself not having to travel too far in his playing career so far. Now, after bouncing around the PDL scene in the Pacific Northwest, where he also had a season with Washington Crossfire, Richey begins his footballing journey in the pros still in Cascadia.

With all the uncertainty of draft day and where he might end up, it must have been a nice feeling for him to know that he was about to begin the new chapter in his life not too far from family, friends and familiar surroundings, instead of having to up sticks and move to the other side of the country.

“It’s one of those things that whichever team takes you, you’re stoked about it because that’s the team that’s giving you your shot before anybody else is,” Richey told us. “But obviously being close to home, it’s fun to be able to, on an off day, sometimes make a trip down and back. It’s fun to see the family and what not.

“But it’s also fun to go to a new city and kind of get out of my own back yard. It’s a good balance of both, where I can visit now and then, but it’s fun to be in a new adventure, a new area.” 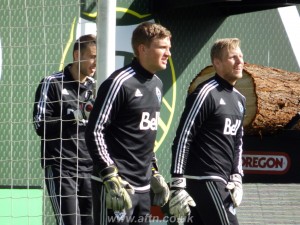 Richey’s enjoying his new life in Canada, but he’s also enjoying continuing to hone his craft in a professional footballing environment. He may have only been here for a few weeks so far, but he feels that what he’s learned in that time from David Ousted and Whitecaps goalkeeping coach Marius Rovde has been invaluable and already improved his game.

“It’s one thing that’s fun about sports overall, but goalkeeping especially, everyone does it a little bit different,” Richey said. “So it’s fun training with different goalies and different nationalities from other parts of the world. Everyone plays a little different.

“David’s been super helpful to me and Marius as well. I’ve kind of taken bits and pieces, a page from their book, a page from his book, and not totally changing what you do but little things that can help you along the line. Both of them have already given me quite a few pointers that have helped me out. It’s a different game up here, so there’s definitely parts of my game that I need to adjust to make sure I can play at this level.”

And has Ousted been teaching him to scream at his defenders?!

“He is!” Richey laughed. “But that’s honestly probably one area that I need to get better at. I’m kind of a, not necessarily a quieter guy at heart, but I’m not much of a yeller. At times, it’s absolutely necessary to be a yeller, to wake some guys up if their off to a slow start. That’s one of the things, one of many, that I can take from David and those older guys.”

With the preseason now over for WFC2, the challenge of their inaugural USL season begins down in Richey’s hometown of Seattle on Sunday. It’ll be a long and tough season ahead, but it’s one Richey feels the Whitecaps are heading in to in good shape for success.

“The one thing we know is that we’ve got tons of talent, tons of good players,” Richey said. “The chemistry will come. It’s tough cos one of the benefits of having a USL team is that it’s right in your back yard, so the MLS players, it’s easy for them to swing back and forth. But the downside of that is that the full roster isn’t there all the time, so it’s coming and going. I think that will be the biggest challenge for us.

“Regardless of what roster is out there on a given weekend, and I’m sure it will be changing all the time, the more training and the more we can get out of the games that we do play together, from a comfort standpoint, will be the biggest challenge. The players are there and the talent is there, so we’ve got high hopes and we’ll be competitive.”