As we all know, and as most of us expected, Saturday’s Cascadia Cup clash between Vancouver and Seattle at Qwest Field went off without too many problems.

Paul Barber praised the travelling Caps support for their behaviour and efforts and Seattle police told Prost Amerika that they were happy with how things played out off the pitch and would have no objections to greater numbers in future if that was what the clubs agreed.

We bemoaned the draconian pre and post match logistics that had been put in place for the travelling throngs. It was a never win situation for the fans. If no trouble happens, then it’s because these rules were laid down. If there is trouble, then it’s a case of “I told you so” and the rules would just be tightened, if we got any away tickets at all.

Whereas the Portland Timbers gave the Timbers Army their ticket alloction and they followed the rules set down by the book, the way the Vancouver allocation was distributed meant a large number of Whitecaps fans flouted these rules and without any problems whatsoever. 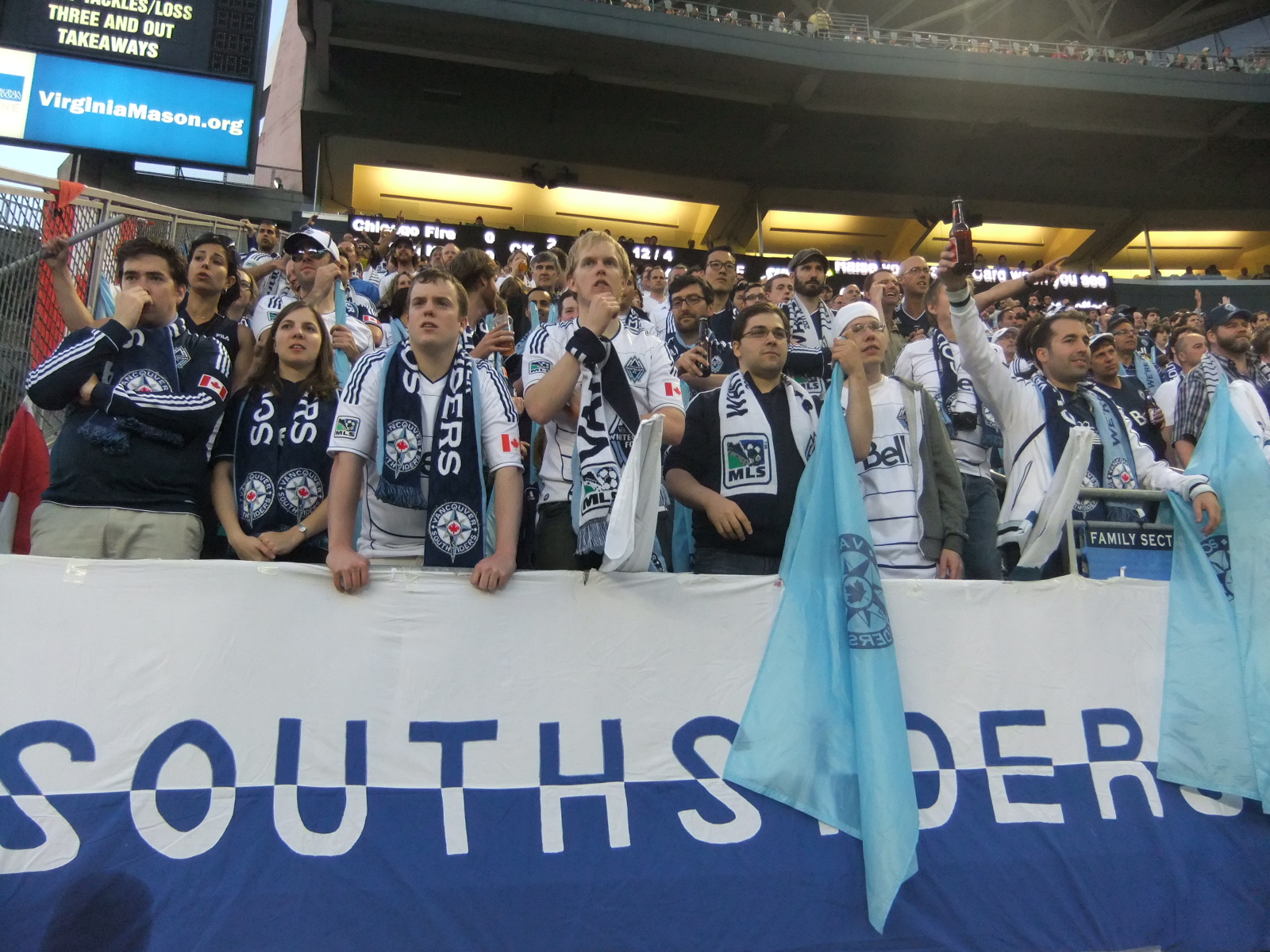 Those that travelled down on the Southsiders and Uniglobe buses were at the stadium for the two hours before the game as demanded.

Those making their own travel arrangements, myself included, arrived when they saw fit and many mingled pre-match in the pubs and restaurants around Qwest Field with no reported incidents. There was friendly banter all round, and this was to be the theme of the evening.

I was personally travelling up from the Oregon coast and didn’t get to Seattle till 6.30 and then into Qwest just after 7. No one cared as I wore my scarf proudly walking up to the gate. No one cared when scanning my ticket or as I walked around the non away support area to get some pics.

You know, how football should be.

If you treat people like animals, you get altercations. If you let people behave with civility, you get a friendly atmosphere, outside of those 90 minutes on the pitch of course, when it’s just pure hatred!

Inside the stadium, security were respectful and clearly understood what was taking place and how to handle issues. There were a few minor issues to tackle and from what I saw, they handled these in a manner which could teach the security at Empire a thing or two.

They didn’t poke us. We didn’t prod them.

Some Seattle fans tried to, as we did to them. Verbal banter really is part and parcel of football. I’d have liked us to be even a bit closer to some of them to get the verbals going properly. Ah how I miss the old days of the sergregation fence at the fitba in Scotland.

It was hilarious getting pelters from the inbred looking ginger kid and his clan when Seattle took the lead, only to give it back to them full pelt seconds later. I thought his little red head was going to explode! 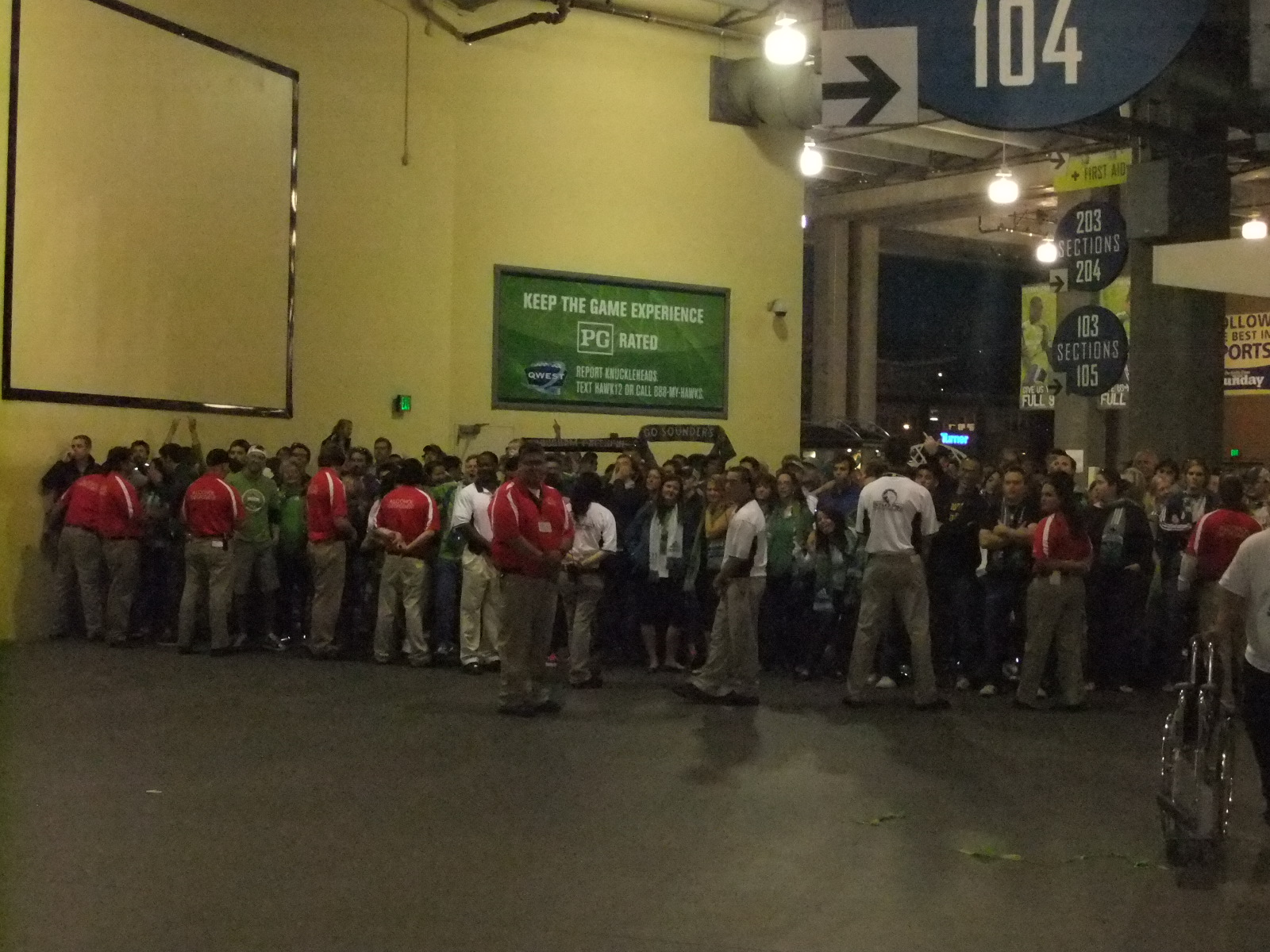 There was also some good oral jousting on the way out of the stadium, with the Seattle stragglers being held back to let us out.

Security were trying to get us out as quickly as possible, but if you’re going to prevent people from taking a piss whilst they’re waiting, something that really has to change next time, then of course there’s going to be a mass exodus to the toilets when we get the opportunity!

Most of us knew we were getting held back and the Southsiders, pretty much to a man and woman, respected that. Others either didn’t know or didn’t care and just wanted out.

It didn’t help when those on the bleachers were allowed to leave and those in Sections 100-102 weren’t.

A number of women pleaded their case to go to the toilet unsuccessfully. Others pushed and a woman at the front was reduced to tears after some pushing and shoving and some apparent punches were thrown. This was the only real shambles at the end of it all though.

My only other real gripe is that it doesn’t help anyone’s cause to have some home fans above the travelling support.

After Hassli’s wonder equaliser, Whitecaps fans were showered with beer and flying bottles from those Seattle fans above them. It doesn’t bother me (I’m from Scotland, I’ve had worse), but it isn’t really acceptable. Plus you just know that if it had been the reverse there would have been an outrage and the threat to reduce or stop away fans ticket allocations.

We were pleased to see that our pre-match fears as to what kind of Caps crowd and atmosphere would be at Qwest were completely unfounded. We’re big enough to put up our hands and say that we mis-read what was going to happen.

Turning the section into one of general admission helped of course and forced everyone into standing. It was great to see. From what I’ve seen of the television coverage, the section looked and sounded great.

Let’s hope we can build on this both at Empire and on the road. 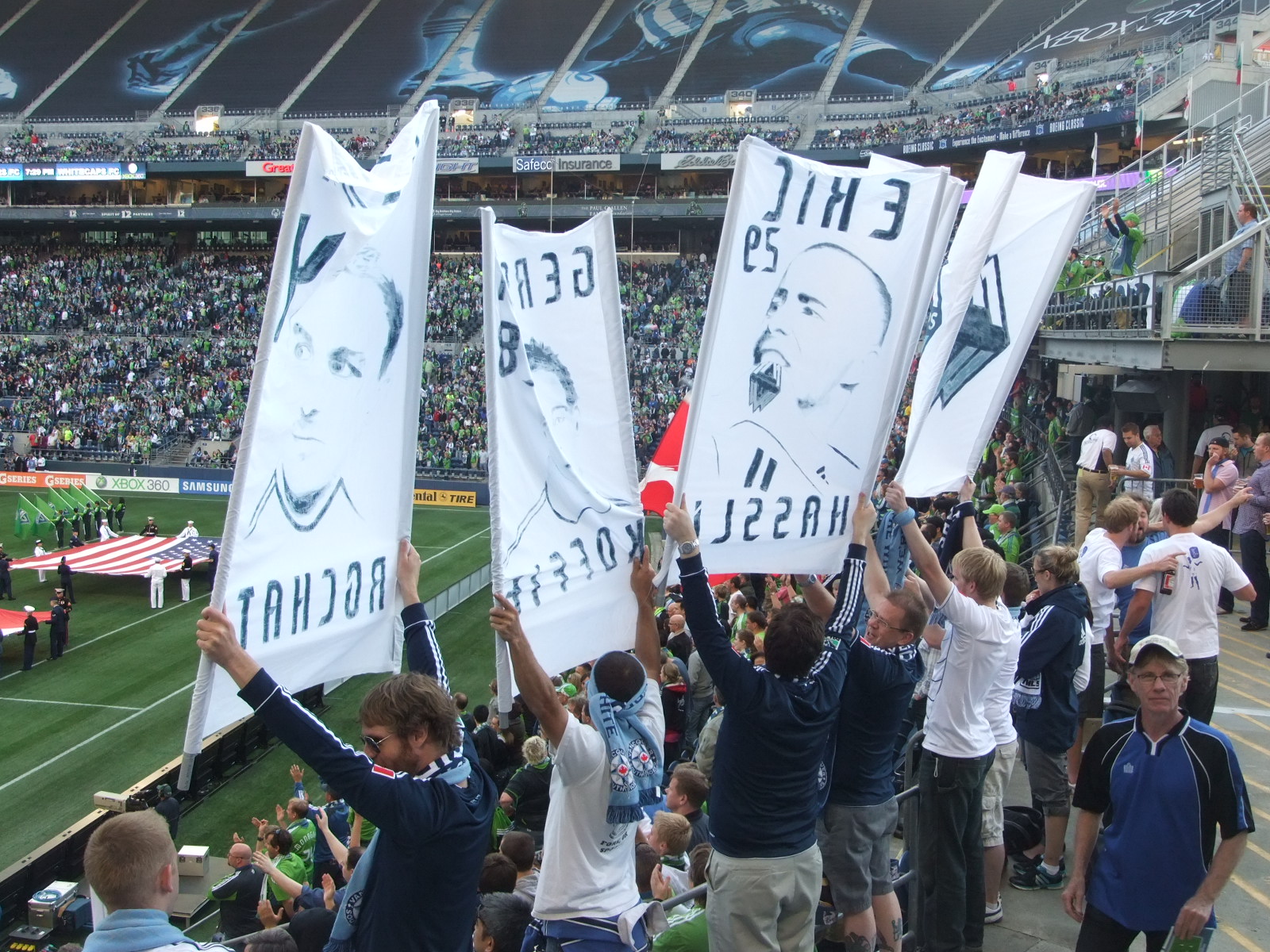 The Southsiders flags certainly made a difference and the player two sticks were simply magnificent and full credit to everyone involved for those.

There’s been some discussion about the amount of people at the game wearing Canucks jerseys. We simply have to face facts that the Canuckleheads are the number one sports team in the city and will be for the foreseeable future.

People can wear what they want to games. I’ve worn other club tops to Caps games in the past and will do again. I think it’s kinda stupid to wear another sport jersey to a football match but there you go. I wouldn’t dream of wearing a Caps shirt to a Lions or Canucks game, but that’s me.

Not a huge issue for me. What I did find very disappointing though was the amount of Canucks songs being sung. FFS, get a grip and support the team on the field that you’ve paid a lot of money to watch.

When the Sounders fans started chanting about Boston. I thought it was sad as it was a completely different sport altogether. That was when I naively thought we were chanting “we want the Cup” meaning the Cascadia Cup!

We clearly still have a lot of work to do to win over some of the support. Chanting for your local hockey team at a football match, especially an away one, is particularly sad as far as I’m concerned.

It is what it is and it is what we make of it and on Saturday, we made a great appearance at Qwest Field.

The passion and rivalry was great to see. It’s just a pity that we don’t have many games close by that would allow us to take this kind of travelling support every other week.

I can’t wait for next year’s trip already. let’s hope we can go down in even greater numbers. And of course, there’s still Portland to come!

** See AFTN’s Flickr page for our photos from the match **