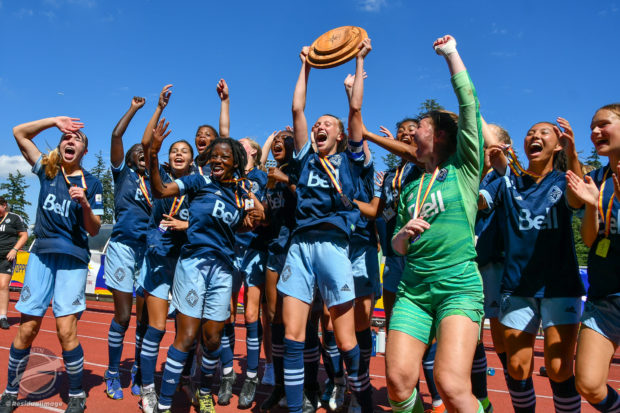 If you want your finals packed full of drama, then both the inaugural League1 BC championship games provided them in droves and served up a great advertisement for football in the lower mainland and the talent on offer.

Vancouver Whitecaps’ Girls Elite were crowned the first ever L1BC women’s champions in stunning style at Swangard Stadium in Burnaby on Monday afternoon, coming from behind to score two goals in the last seven minutes and secure their place in the history books in a highly entertaining encounter with Varsity FC that just proved yet another example of why these talented women’s need a league of their own a proper place to play.

Varsity headed into the match as heavy favourites. Their older, more experienced team had been dominant in the 12-game regular season, posting an 11 and 1 record, the most goals for (31), the fewest against (just seven), and racking up 33 points.

The Point Grey side had finished eight points ahead of the Whitecaps in the standings and won their two one-on-one match-ups by a combined 7-1 scoreline. But in finals and championship games, form, stats, and expectations can go out of the window, and it certainly did here with Katie Collar’s young side playing the game of their lives to become the league’s first champions.

Heading into the game, many would have hoped that we got at least a competitive match. The teams served that up and more.

But it was looking ominous for the young ‘Caps when they found themselves one down just 57 seconds in.

Sophie Damian forced a giveaway from Jeneva Hernandez-Gray on the edge of the ‘Caps box, poking the ball through for Jenna Baxter to run on to and the SFU assistant coach finished with aplomb past Leah Parsons into the far corner for her seventh of the season and giving Varsity a very early lead. 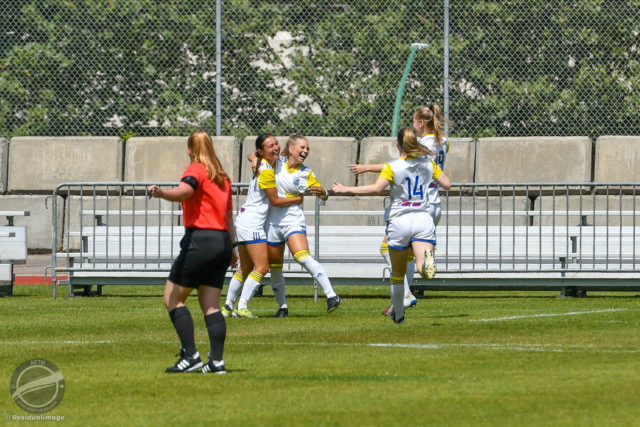 After Varsity’s four goal first half demolition of TSS Rovers in their last regular season match, you worried that a rout might be on and the UBC-based side launched several attacks on the ‘Caps goal trying to get a second.

But it didn’t come. The Whitecaps defensive play was stellar, they weathered the storm, and then started to take the game to Varsity, looking the far better team and most likely to score for the majority of the first half. Ashley Roberts even had the ball in the net with a lovely lobbed finish, but the goal was disallowed for handball in the build up.

The second half started in the same vein, with the Whitecaps pushing hard for the equaliser. Although they were controlling the play, Varsity’s resolute backline was dealing with everything and they nearly put the game to bed in the 77th minute when Vanessa Tome crashed one off the left post after getting onto Katlin Tolnai’s cross. 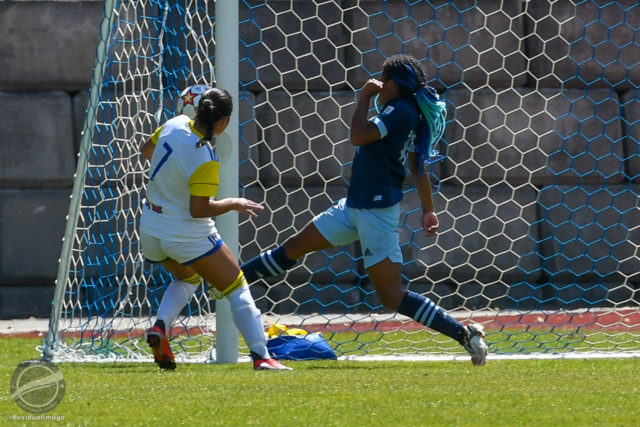 It was to prove a costly miss.

The Whitecaps had forced a number of corners, but were always finding a Varsity head on the end of the good deliveries to clear the danger. That all changed in the 84th minute when Hernandez-Gray sent another great ball into the box and this time it fell to a wide open Iba Oching on the six yard line and she fired home the equaliser to set up a grandstand finale. 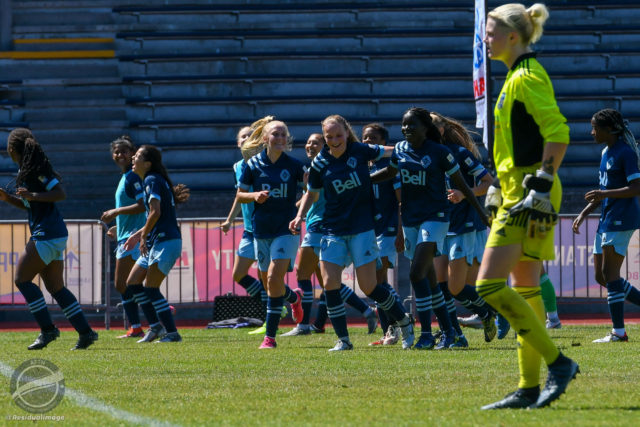 With penalties seemingly looming, the championship was settled in a manner more deserving.

Hernandez-Gray collected the ball 35 yards from goal, powered forward through the Varsity rearguard, and lofted a fantastic finish into the postage stamp corner, sparking scenes of sheer jubilation on and off the pitch and from the majority of the 1,257 fans in attendance, and leaving Varsity looking stunned. 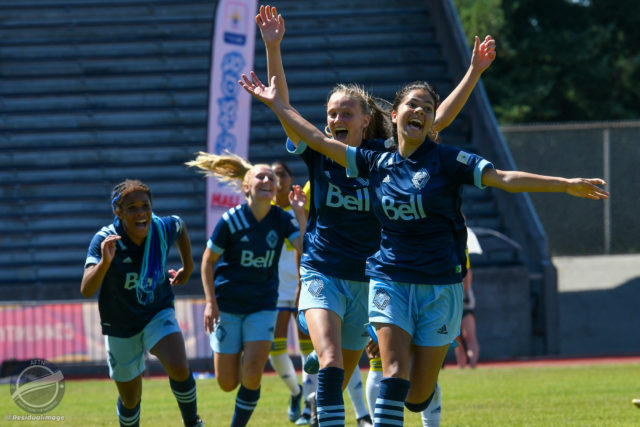 It was a great way to win any match, never mind a championship, and capped off a highly enjoyable game in some style.

This was a Whitecaps team predominantly made up of 15 and 16 year olds, having lost seven of their senior starters to the NCAA ranks midway through the season, with a bulk of the team making up the Canadian U17 roster that will be heading to the World Cup in India in October. The fight they showed to win this one bodes well for club and country and the future.

Whitecaps coach Collar had reiterated to us that we needed to “trust the process” and that the girls would bounce back from the adversity and the underdog status and show up in the final game, and she was certainly proved correct.

“It feels amazing, couldn’t be more proud of the girls,” Collar told AFTN after the match. “The work that they’ve put in all season, the adversity that they’ve faced, everything they did to get here and then to ultimately battle back and win, it’s amazing.

“I’ll be honest, I knew what we had in us and I still thought we would win the game. I still believed in the kids and when they hit the post in the second half I knew we were going to win the game. It was just about keeping the mindset, building on the things that we did in the first half that we were having success. We tweaked a couple of little things tactically, but overall it was the mindset and the winning mentality that they had brought it all the way through.”