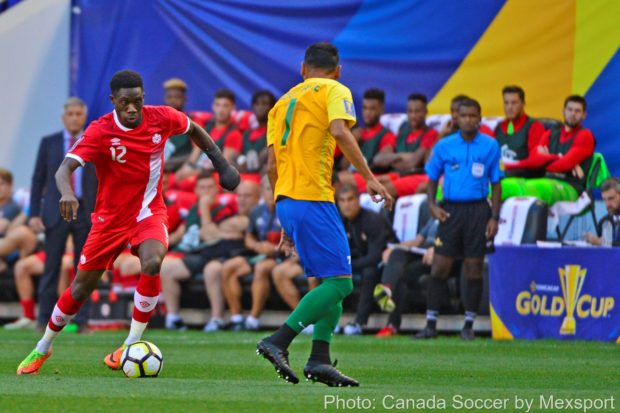 The Alphonso Davies hype train was already hurtling along the tracks at a breakneck pace, but after his two goal haul in Canada’s 4-2 Gold Cup win over French Guiana, that train is now reaching supersonic speeds.

Davies was the difference maker for Canada, and they needed him to be after seeing their comfortable three goal lead over the Gold Cup debutants reduced to one after giving up two goals in two minutes. Davies had added Canada’s third nine minutes earlier, and he was on hand again to secure the vital victory and fire home the fourth with five minutes remaining.

It was an amazingly assured and confident performance from Davies on his competitive national team debut. One which will likely see another couple of millions added to his growing transfer fee for the Whitecaps, and one that left his coach and his teammates raving about what lies in store for the 16-year-old.

“He’s a young man with a tremendous future,” Canadian head coach Octavio Zambrano told reporters after the match. “Really, truly, the sky’s the limit for him and I say that because I know his personality. He’s a humble kid. As the great Pele once said, you have to be humble before you have to be great.

“And he is a very humble player with tremendous tools to play the game. How far he can go and what he can reach is for all of us to watch him. Enjoy the ride with him because it’s going to be a good one.”

It’s been a whirlwind month for Davies, first getting his Canadian citizenship on June 6, then making his Canadian national team debut as a 53rd minute sub in the 2-1 friendly win over Curaçao in Montreal one week later.

Friday night was Davies’ competitive Canadian debut and it doesn’t get much better than scoring a brace in a win. Davies started and played the full 90 minutes, and despite his young years, Zambrano said he had no qualms about blooding the Whitecaps winger for this important first match of the tournament.

“His age doesn’t really play too much on our minds,” Zambrano said. “I don’t think it plays on his mind at all. When he steps on the field, he comes to play, and it doesn’t really matter to him one bit if the guy that is in front of him is twice his age. He will play with the same intensity and the same pizzazz that he possesses. I couldn’t be more pleased for a great debut for a guy like him.” 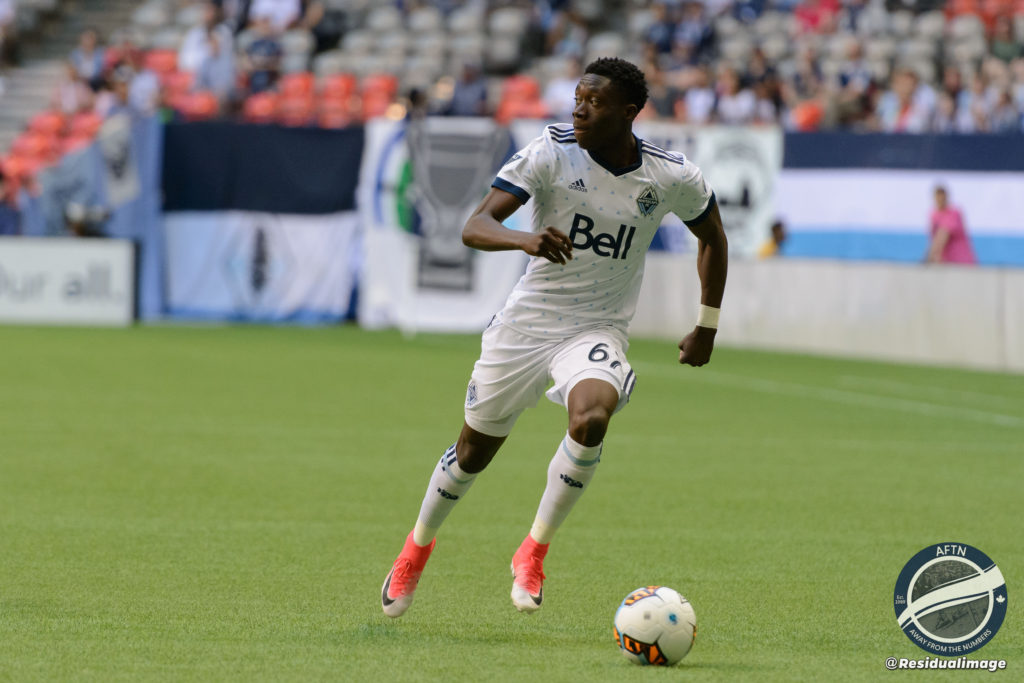 Davies undoubtedly turned a few more heads tonight. He’s already attracted a lot of attention with his performances for the Whitecaps and has been scouted by the likes of Manchester United, Chelsea, Liverpool, and Juventus. Turning it on in MLS is one thing, doing it on the international stage in front of a worldwide audience takes things to another level.

And it wasn’t the watching scouts and his coach that were impressed by what they saw from Davies on Friday night, his teammates were equally in awe with what they’d just seen from him on the pitch, including another one of Canada’s goalscoring heroes on the night, Burnley midfielder Scott Arfield.

“Fantastic,” Arfield enthused about Davies after the match. “He’s probably the most exciting kid, I think that’s the word, he’s still a kid, that I’ve ever played with or probably ever seen with my own eyes. I’ve been about for a long time and by far he’s the most technically gifted, humble, modest young man that I think is going to go from strength to strength.

“I know that a number of the big hitters in Europe have certainly been looking at him and the more you get to know him as a lad, you know that he’s got every chance to really step on here. The experience that he’s shows at 16-years-old to come into a game like that, when your back’s against the wall, and we’ve kind of lost your shape for 20 minutes or so, to take it with a technically gifted strike and put it in and see the game out, speaks volumes for him.”

Patrice Bernier is another veteran that’s seen a number of Canadian, and other, young players come and go during his career. This is his fourth Gold Cup and the Canadian captain was delighted by what he saw from.

“A 16-year-old scores two goals, that’s probably a record for the Gold Cup,” Bernier told our man on the ground Jonathan Tannenwald after the match. “What a way to start your official debut for Canada. To score two goals and show what you’re able to do.”

Bernier’s see a bright future in the hands of Canada’s current crop of young talent, especially in the attacking department with the likes of Davies, Anthony Jackson-Hamal, and Lucas Cavallini.

Bernier readily admits that Canada “hasn’t had that much threat altogether” for a long time and is another impressed by not only what Davies bring to the team, but by what it can mean to the national team’s future prospects.

“At 16 I didn’t remember being like that,” Bernier quipped. “He’s very calm, mature. Just look at his finishing. He didn’t fluster. At 16-years-old he has quality but this was the first official game for him and in the tournament and he went out there and played.

“The great thing is, maybe because he’s a teenager he doesn’t really think of where he’s at. It’s maybe innocence has allowed him to play, but he has quality. It’s amazing to see at 16-years-old what he can do and what he’ll be able to keep doing for Canada.”

******
[A massive thanks to Jonathan Tannenwald for providing us with the postgame audio. Very much appreciated. Give him a little thanks back with a follow on Twitter, @thegoalkeeper]
Tags: canada, Gold Cup, Vancouver Whitecaps, Alphonso Davies, Scott Arfield, Octavio Zambrano, Patrice Bernier, French Guiana