With only three matches in MLS this past weekend due to the international calendar (and there shouldn’t even have been any), that meant limited minutes for Canadian players this week, so we’ll keep our Week 4 update brief.

Fraser Aird started and played the full 90 minutes in Vancouver’s 1-0 win over Houston, making a few dangerous forays forward and looking better in defence. Still very much a work in progress, but it’s good to see him constantly improving. His minutes take him to the most of a Canadian player in MLS this season, albeit having played a game more than anyone. Well half a game more I guess.

Sam Adekugbe saw his first Whitecaps minutes of the year in the game, coming on as a 69th minute sub for Cristian Techera, and he wasn’t afraid to put himself about a bit. Jordan Harvey is still performing exceptionally well, so Adekugbe is likely going to have to wait for his start until Carl Robinson wants to give the veteran a rest.

The final Canadian player to see time this weekend was another getting his first minutes of the season, DC United defender Kofi Opare. Playing the full game in a horrible 3-0 loss wasn’t the start Opare would have liked. With DC struggling right now and looking all at sea, everyone’s place is up for grabs right now.

No goals, assists, bookings or sending offs to report or show any action of, so let’s just get straight to the updated standings for the 2016 season so far. 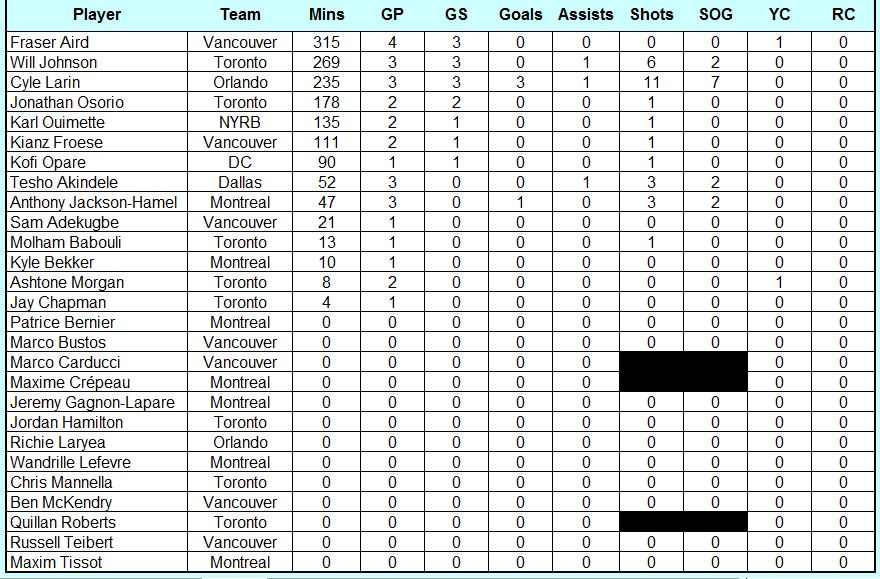