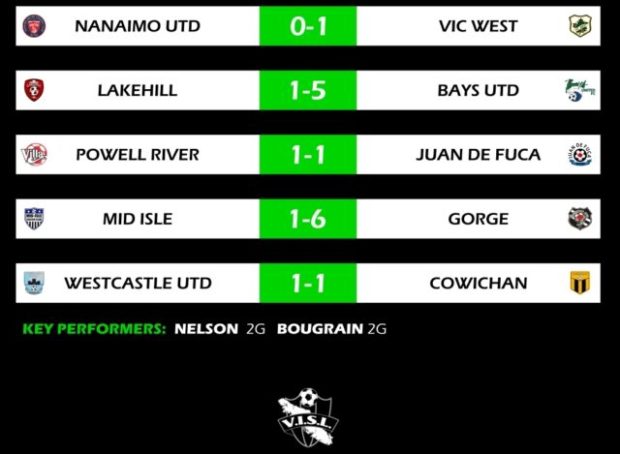 An interesting first weekend in the Vancouver Island Soccer League (VISL) top flight has passed, and needless to say, many Division 1 followers would have been proven wrong after looking at the results.

The Division started out with a bang as Vic West traveled up to Nanaimo and came away with a 1-0 win over the hosts thanks to a goal for Matthias Raps and a clean sheet for the Greens from Ben Chamberlin.

Friday night also saw a surprising result at Braefoot Park in Saanich as Bays Utd defeated Lakehill by a huge 5-1 scoreline. Last year’s top Division 1 scorer Patrick Nelson was on target for Bays already with two goals. Alex Redpath added a gorgeous free kick, with goals from rookie Aiden Taylor and Nestor Valencia rounding off the Bays scoring. The lone goal for Lakehill was also from a beautiful free kick, with Wesley Barrett taking the plaudits.

Saturday’s first game featured the two promoted teams from Division 2 last season. Juan de Fuca All Flows went to Powell River and the local fans were treated to a highly entertaining game to celebrate the community coming together in building new stands at Timberlane Park.

The game finished 1-1 with Kye Taylor scoring for Powell River and Andrew Fitzpatrick scoring for the Westshore boys.

Nanaimo District secondary school was the venue for Saturday’s other game as Gorge rudely welcomed Mid Isle to the start of season with a 6-1 win. Zak Bougraine hit a brace for Gorge, with Dominic Colantonio, Anton Bucher, an own goal, and Edward Lawson making up their six of the best. Scoring the lone goal for Mid Isle was Alexander Escobar.

The final game of the weekend was also the VISL Game of the Week with Westcastle hosting Cowichan at Victoria’s Royal Athletic Park, with the match also counting for the Cup Winners Cup competition.

The match ended 1-1 with Blaze Roberts scoring for Cowichan and Abraham Dukuly getting on the scoresheet for Westcastle. Game MVP was Ethan Monaghan.

The old Cup started back in 1904 and features last year’s Division 1 champions (Cowichan) and last year’s Jackson Cup champs (Westcastle). So while the league game portion stayed as a draw, penalty kicks were required to decide this year’s Cup Winners Cup champion, with Westcastle running out victorious 5-4 on penalties and hosting the cup that Cowichan acquired last year.

It was a thunderous start to the campaign, and it only proves why the saying/movie “Any given Sunday” is so correct.

Here are the standings after the completion of the first week of play: 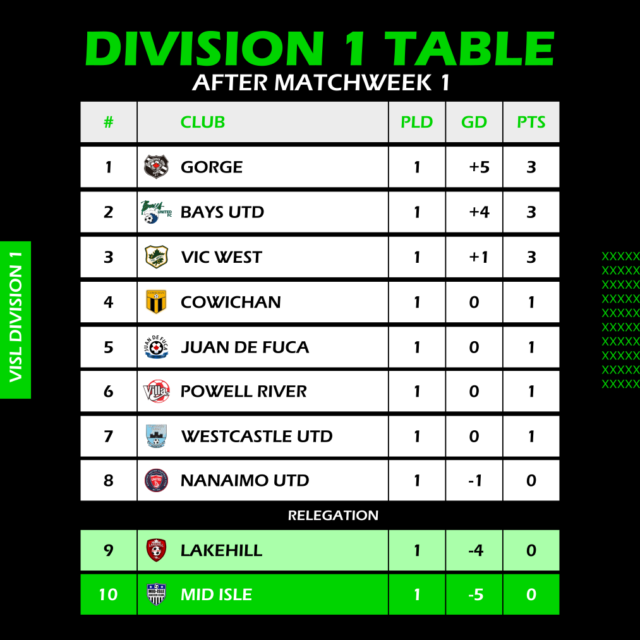 As we roll into Week 2, hopefully we can get the majority of our games in and the weather cooperates.

Friday gets started with Gorge hosting Nanaimo at Hampton Turf. Gorge are coming off a thumping of Mid Isle, and will look to do the same in their home opener, while Nanaimo are coming off a tight loss at home to Vic West and will want to get their first points of the season to save falling too far behind this early.

Cowichan are hosting Lakehill on Friday night, and will try to slow them down by playing them on Kesserich grass. It is located right beside Sherman Road Turf and was last used in a Division 1 game maybe three years ago (??).

The hosts will look to get their record setting 6th Garrison Cup (Division 1 Champion) campaign fully up and running after earning a draw against Westcastle, while Lakehill will look to bounce back after taking a lopsided loss to Bays in their home opener.

Bays Utd host Mid Isle on Friday as well. They will want to keep their hot start going and Mid Isle will look to rebound from a disappointing start at home last week. The game at Oak Bay High School should have some goals.

Saturday has the division’s oldest team, Vic West, hosting Powell River who have been absent from the division for the better part of 10 years. Vic West will look to keep their good start going, while Powell River are coming off an opening weekend draw.
It will be very interesting to see how the freshly promoted Powell River team fair on their first road trip of the year.

Sunday has the weekend wrap up with newcomers Juan de Fuca All Flows hosting defending Jackson Cup and now Cup Winners Cup champions Westcastle. JDF will be in tough playing the fast squad that is largely made up of academy players who are young and talented. Both teams are coming off draws, and will look to earn three valuable points early in the season. The game will be held at JDF fields across from the Q Center in coordination with Youth Days happening with the Westshore based club.

Here’s the full fixture list for this weekend’s Division 1 matches. 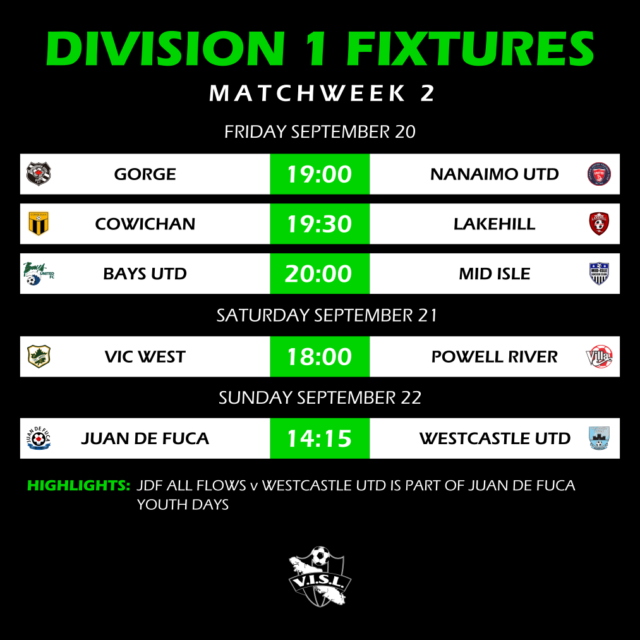 Remember you can get all your VISL news, results, fixtures, and more all season long on VISL.org.