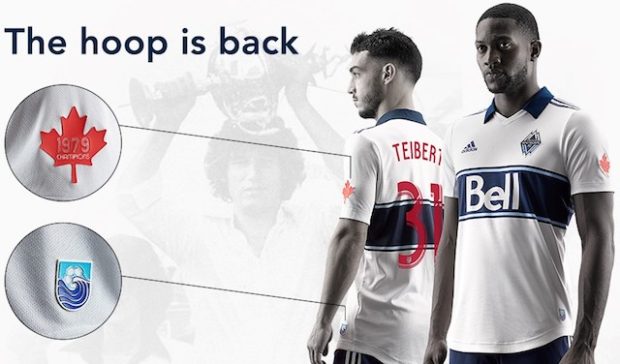 To celebrate the 10th anniversary of Vancouver Whitecaps’ first ever match in Major League Soccer, we’ve been running a vote all week over on the AFTN Twitter account to crown the best ‘Caps jersey from their MLS era.

Round by round the 12 jerseys were whittled down until we got to the final two. Appropriately it was a battle between home and away, as 2019’s retro inspired Hoop home jersey squared off against 2016’s Sea to Sky away jersey.

I thought it may have been closer than it eventually was, but in the end there was no stopping the Hoop, which took 59.8% of the 246 votes cast in the final run-off.

POLL: Vote now! Since it's the final and since we're planning on doing a live show on Friday evening, we're doing the voting slightly shorter and we'll reveal the winner on our YouTube show. Vote away. Is it the 2019 @WhitecapsFC Hoop or the 2016 Sea To Sky for you #VWFC fans?

Inspired by the iconic design that was first worn during the Whitecaps’ Soccer Bowl winning season in 1979, the 2019 Hoop jersey was an immediate hit with supporters, becoming an instant modern-day classic.

This year’s revamped Hoop design made a few changes and went head to head with the 2019 design in our kit vote semi-finals, but the older design won that with 54% of the vote.

If you want to know how all the rounds of the voting went, here’s how it all played out.

We did this as a completely open cup draw, so with 12 jerseys and eight first round spots, that meant that four jerseys got byes into the second round and they were the 2013 home, the 2016 Sea to Sky away, the 2017 home Rain jersey, and the 2018 away Unity kit.

And you all know now how the final played out!

Thanks to everyone who voted in all of this on Twitter and there were a lot of fun discussions around Whitecaps jerseys and football kits in general, which I really enjoyed. What will the next 10 years bring? Well all we know is that the 2022 away jersey has already been designed and they’re working on the 2023 home kit now!

We’ll do this again later in the year and add some USL, 86ers, and NASL jerseys into the mix. That could be another interesting set of votes.