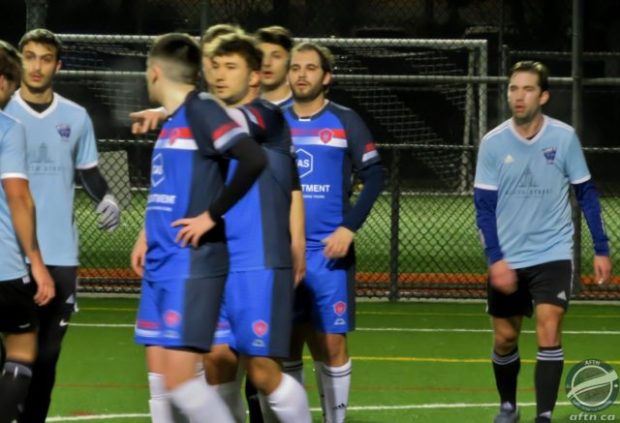 With Covid disrupting the 2020 and 2021 editions, the Imperial Cup is finally back on the line, with Premier and Division 1 teams set to battle it out for silverware and Provincial Cup places over the coming weeks.

The action got underway this past weekend with four first round match-ups, and we’ve already had a couple of cup shocks play out, with two second tier teams knocking out two of the big boys.

The Round of 32 saw two forfeits to kick things off, with GN Sporting Club and Port Moody SC gifting victories to Columbus FC and Westside FC respectively, in two all-Division 1 clashes.

They were joined in the next round by two more Division 1 sides on Saturday, with Vancouver Greencaps seeing off Coquitlam Metro Ford Lupi up at UBC and Coastal FC pulling off the first shock of the weekend down at Trillium with a big 4-2 win over Premier side BCT Rovers Hurricanes.

Coastal had looked to be coasting into the next round after going two goals up, but were pegged back by the Hurricanes before a strong late showing took them through.

An understrength Hurricanes side had dominated the early chances, but couldn’t convert them and it was Tyreese Meas who fired Coastal ahead three minutes before half time with a nice turn and shot from the edge of the box. Valentine King doubled the Division 1 side’s lead on the hour mark after a quick counter, but the Premier side pulled one back just three minutes later through Harpreet Khakh.

The Hurricanes pushed hard for the equaliser and it came in the 75th minute when Rahid Rahiem hit a beautiful dipping volley from the edge of the box. But Coastal weren’t done yet and they retook the lead with eight minutes of the match remaining when Alex Erakovic capitalised on a quick transition and ran in on goal to score.

The Hurricanes looked for another leveller but couldn’t find it and James Cameron finally put the game to bed for Coastal in the last minute with a stunning screamer from the edge of the box that flew into the top corner, capping off a titanic effort from the Division 1 side.

The Imperial Cup action finished up on Sunday evening with a couple of games at Burnaby Lake, and there was another shock to be played out.

The later action saw Metropolitan FC come away with a 5-2 victory at FC Serbia United, in an all-Division 1 clash, but before that there was bad news for another Serbian side as Premier team Burnaby Selects White Eagles found themselves on the wrong end of a cupset at the hands of Division 1 Pool B leaders Rino’s Fury.

It was an entertaining encounter and the Premier side were left rueing a string of missed chances that would have seen them advance into the Round of 16, but instead they found themselves bowing out to a 2-1 defeat.

The Fury stunned the White Eagles early when the ball was squared to David Moore in the box, who fired home the opener just five minutes in. The Burnaby side then turned up the pressure but squandered a number of good opportunities to tie things up, while Rino’s also nearly doubled their lead with a shot that crashed off the right post.

The White Eagles did finally restore parity three minutes before half time when Mladen Ljumovic finished of a nice move, but this was to only last until two minutes after the restart when Ryan Cooley scored what proved to be the match winner, finishing off a nice team goal with a touch around the keeper and then tucking it away.

The Burnaby boys tried to get back on level terms, and certainly had their chances, but their shooting boots just weren’t there and Rino’s held out fairly comfortably in the end. The White Eagles miserable night was made complete in the 90th minute when Stefan Cuk was sent off for a second booking.

So those games set up the Round of 16, which will be played next weekend on February 18th, 19th, and 20th. You can find the full Imperial Cup draw HERE.