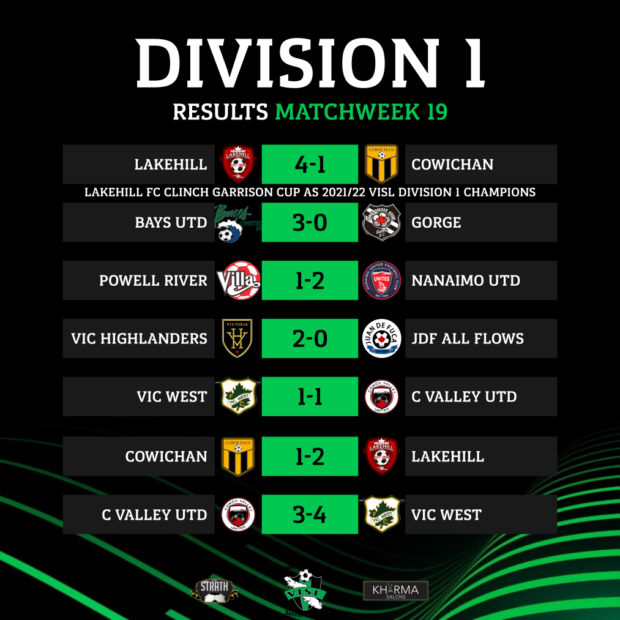 It was a busy, long, and late weekend of soccer up and down the Island in Vancouver Island Soccer League (VISL) Division 1.

Four teams doubled up and played two games in one weekend, not a common occurrence. Overall seven games were played over three days and by the end of it all we saw the crowning of the Garrison Cup Champions, as top team in the division for regular season play, Lakehill FC.

Friday started at Braefoot where Lakehill FC were able to clinch the championship with a 4-1 victory over Cowichan FC. Isaac Koch scored a brace, with Blair Sturrock and a Cowichan own goal adding to the champion’s tally. The loan goal scorer for Cowichan was Colin Knight.

Friday also saw Bays Utd blank Gorge FC 3-0 thanks to goals from Chris Peereboom, Ethan Finnigan, and Brandon Groot (which you can watch below). Preserving the shutout for Bays was keeper Bryce Benton.

Check out the highlights from Men’s Div 1 team as they notch up 3 goals against Gorge as they battle to secure provincial play-off place @VISLinfo @BaysUnitedFC @SoccerXdotcom pic.twitter.com/cErP24iBBL

Next up was a tight match at Timberlane Park as Nanaimo edged Powell River Villa 2-1. The lone Villa goal was scored by James Timothy. Nanaimo replied with goals by Daragh Fitzgerald, and Taylor Arbour on the last kick of the game.

The last game on Saturday night was the first game of a home and home series between Vic West and Comox, with the match finishing up as a 1-1 draw. Comox were on the board early with a goal from Nick Marinus and there was another goal at the death to preserve the draw for Vic West, scored by Salem Almardy.

Sunday saw the second game of the weekend between Cowichan and Lakehill, with the champs coming out on top via a 2-1 scoreline. Thomas Mallette and Matthew Olaka were on target for Lakehill, while notching the single for the home team was Jordan Korven.

The last game of the weekend, finishing very late Sunday night in Comox, was the second game between Vic West and Comox. Another goal at the end of the game, this time giving Vic West a 4-3 win over Comox. Vic West goals came from Salem Almardy, Marcus Campanile, Aaron Schneebeli, and Andres Algarin, with the Comox goals from Kyle Bate and Nick Marinus with a double.

So with all the results into the system, here is what the VISL Division 1 table looks like: 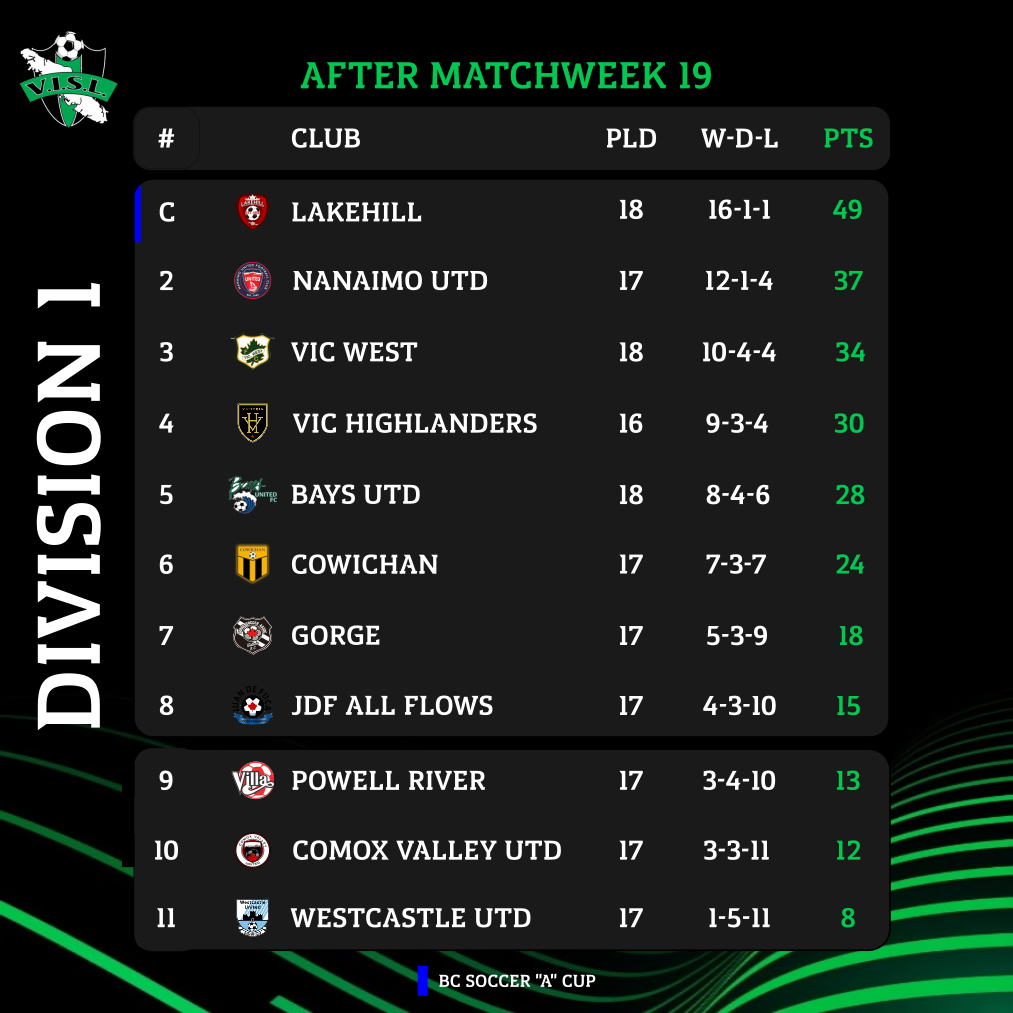 Nanaimo and Vic West have positioned themselves nicely to earn themselves a Provincial Cup berth and the real battle will now be focussed on the bottom of the table.

Three teams are in the relegation zone, and one other team is close. There are going to be some big matches coming up in the next few weeks. They will show if Westcastle can work their way out of the cellar – it will be tough.

There were a couple of shutouts on the weekend, but the Golden Gloves leaderboard does not change too much at the top, with Lakehill’s Hardeep Gahunia still leading the way.

On the goal scoring front, Blair Sturrock continues to add to his totals and is still leading the race to securing the Golden Boot award. It will take the next closest players having personal bests on a couple of occasions to catch the seasoned veteran. 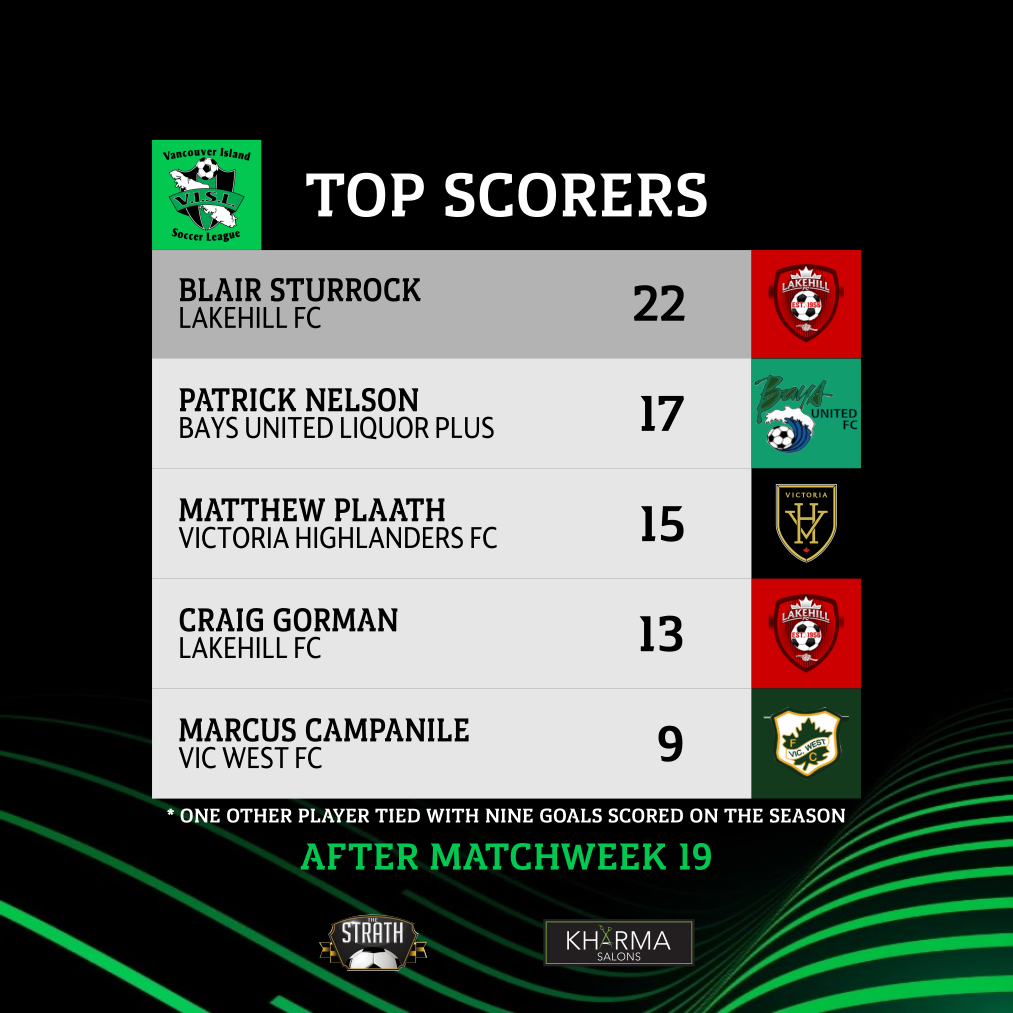 This week’s schedule is split between both league and cup action.

In the league, things get started out on Friday night in Duncan as Cowichan hosts Gorge. This should be an exciting match up between two teams on the bottom half of the table. Cowichan will look for the three points so to be a little closer to setting themselves up for a Provincial Cup match.

Friday will also see the Victoria Highlanders play at Oak Bay High against Bays United. This will be a fun one as well, with the young Highlanders squad taking on the more seasoned Bays team. Bays will be looking for three valuable points to help solidify a top five finish.

Saturday starts off with Juan de Fuca Allflows hosting Nanaimo at Starlight Stadium at 6pm. A Nanaimo win gets them pretty close to securing 2nd place. JDF will look for the three points to stay out of the bottom three in the relegation zone, but more importantly, ensure they are not able to be caught by the current basement dwellers.

Saturday has a huge matchup for Westcastle as they host Vic West at Starlight Stadium at 8pm. Westcastle are not at a MUST win stage yet, but they are getting close to it. A Vic West win would confirm a minimum 3rd place finish in the division, and qualification for the BC Soccer Provincial Cup.

Sunday wraps up with one extra match for the Victoria Highlanders as they travel to Powell River. This game means more for Powell River as they work to get out of the relegation zone, but mostly to stay clear of the bottom spot.
This will be a tough match for Villa, but you know the hometown faithful will be there in support of their team.

Here’s the full slate of league games in Division 1 this weekend: 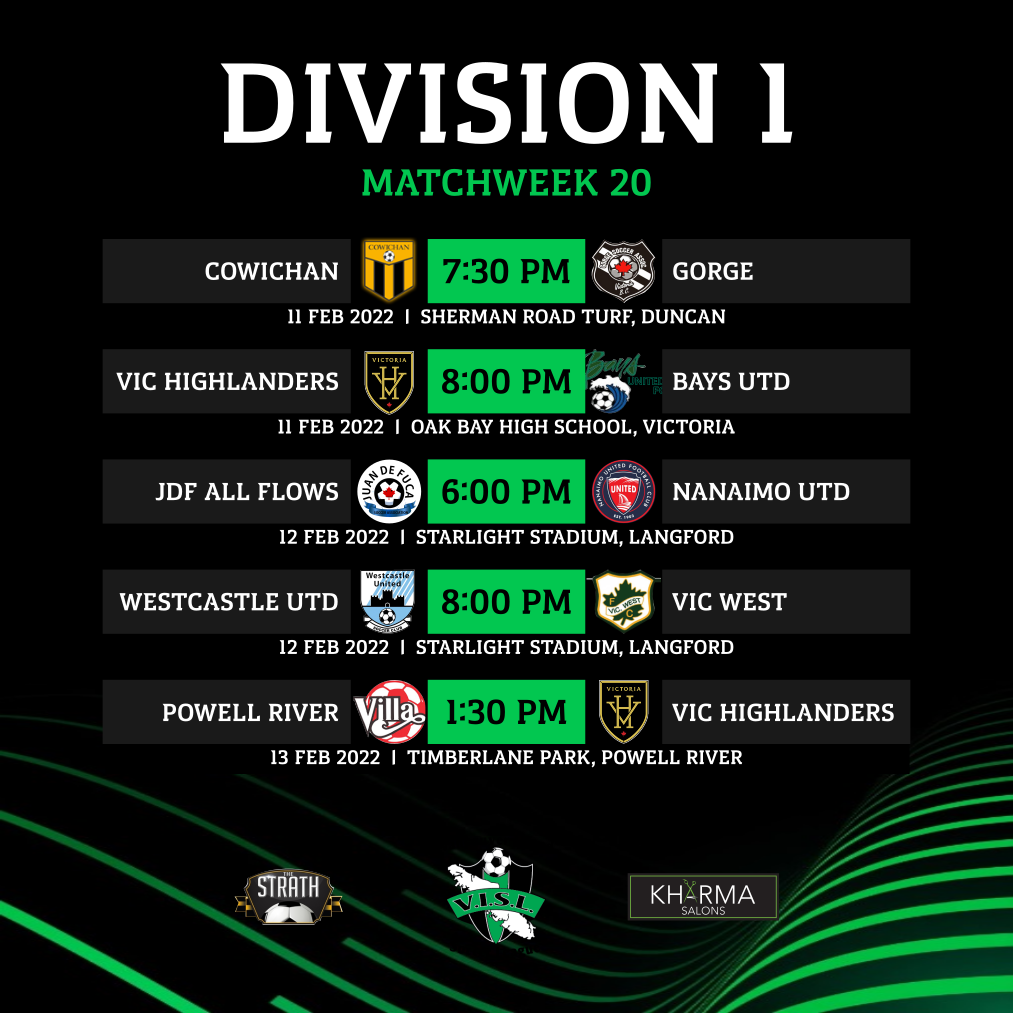 And if that’s not enough for you, this is it. One of the most exciting times in local amateur soccer – the start of the most treasured cup run on the Island; the Sir John Jackson Cup.

The Sir John Jackson Cup started in 1915 and the gorgeous sterling silver trophy has been around every year since. Ah, the stories it could tell.

This competition is open to all teams in Divisions 1 and 2 and here are the play-in round games coming up this weekend: 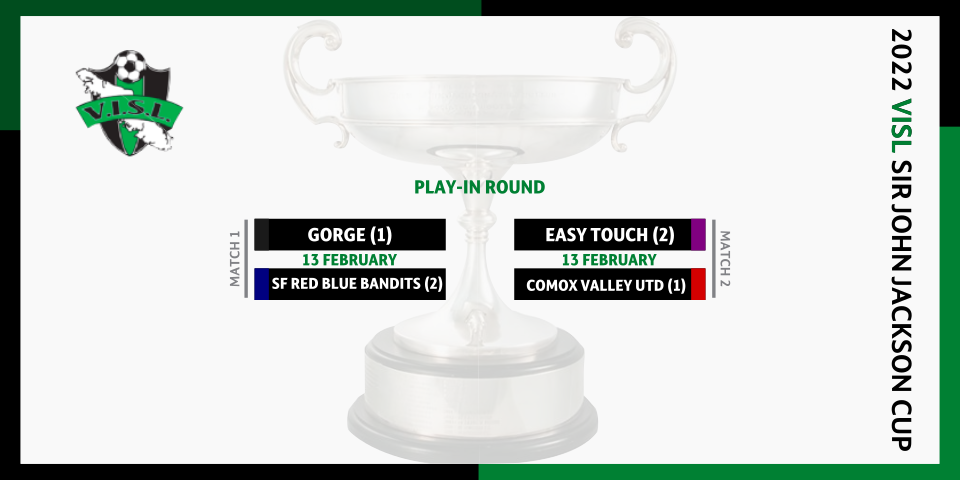