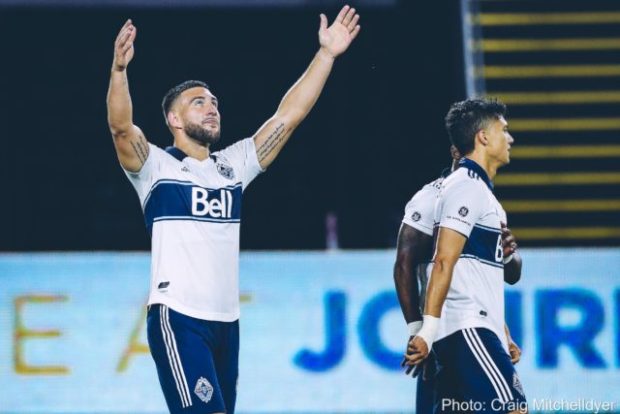 Well, 2020 has been a bizarre adventure for most of us and we certainly aren’t excluding the Whitecaps from this trite observation. Missing key pieces from the MLS Is Back tourney in Florida, being separated from friends and family, holding “home” games in Portland, fearing the next positive case, enduring the injury bug, being sequestered in a hotel, and so on. We all know these truths and we’ve all heard these talking points from our manager and the club.

While these 2020 realities are a big deal, let’s not allow them to obscure the underlying issues of the product on the field. We are not the only team in the league to have been impacted and I fear that if the club takes or is given a pass on 2020 due to the pandemic, we are less likely to see sufficient upgrades to make us competitive in a post-pandemic world. In making these statements, I am assuming that someone at the club actually wants to see improvement year over year. This may only be an assumption on my part.

As this season has progressed, we have indeed seen some improvement through some positive play, some positive spirit, and some flashes of what we thought we might see at the beginning of the 2020 season. These are all good things and any time improvement occurs, we fans can be encouraged.

However, when the product on the field in the first two thirds of the season was dreadful, small and incremental betterment still leaves the Caps as a bottom third of the table team. Don’t forget that many of our positive results and much of our positive play came from games in which the opposition was down a man due to a sending off, down some regulars due to rotation in a fixture filled week, or down some regulars due to national team duties. Also, in most of our “home” games, the other side had to fly in on game day.

The 2020 Whitecaps, seen through the lens of the beginning, middle, or end of the season remain a side woefully incapable of striking fear in the hearts of the teams at the top half of the table. Remember, the MLS is still a league with significant parity. Bottom feeding teams can, on any day, get a result against a better club. Getting consistent results is another matter.

I used to get a chuckle from Carl Robinson setting us fans up for the next fixture. “You know this is a top top team” he’d say as he responded to a question about an upcoming game. What he was really saying was ‘don’t get your hopes up, we Whitecaps, as usual, continue to be a middling team and any positive result will be an unexpected result’.

To be clear, most of the Caps’ signings leading up to the commencement of the 2020 season have proved underwhelming at the end of the day. The odd flash of a fine pass here or a good turn there or an isolated good attack are simply not good enough. There is no consistent MLS 3.0 level of play because we don’t have the horses with the necessary skills and physical attributes to produce on a regular basis. 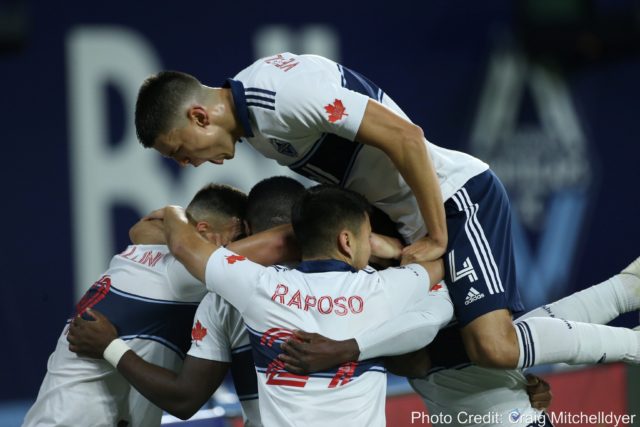 Like most fans, I had high hopes that 2020 would be a year of significant uptick in the ‘Caps. Axel Schuster and Marc Dos Santos had the time and some Phonzie Dollars with which to effect positive changes. Gone was the excuse of the scramble to make signings leading up to the 2019 season. After two years on the outside looking in, here was a return to the playoffs and a move toward respectability. Well not so much.

Any way you slice it, the 2020 Whitecaps never passed the smell test. Analytics are interesting and helpful. But, how many times did you simply watch the Whitecaps this year, get a big smile on your face and yell at your screen in triumph! The answer is, well you know what the answer is. Too often, the performance on the field was not a pretty sight.

From the management perspective, we should applaud the Club for seizing the public relations initiative of pairing with and supporting the Vancouver Aquarium and being ahead of the curve on the mask front. A job well done.

On the other side of the management coin, we should give the club the Bronx cheer for dumping the well respected Mark Pannes so soon after hailing his arrival and for parting ways with Inbeom Hwang and Yordy Reyna with no replacement plans in place. What were you (not) thinking?

On the player front, I think we can universally applaud the re-signing of Erik Godoy. Once the injuries and out of position play were in the rear view mirror, it was clear that he is a central defender that any MLS team would be happy to have as a starter, full stop. I say “full stop” here because I’m not certain that we have any other players that most other teams would be happy to have as a starter. While such a statement might be controversial, it is also rather a sad statement as I just might be correct.

The faithful seemed to be hoping for the ‘Caps to take a pass on Ranko Veselinovic when the club approached the trigger number of games for him to become an automatic purchase. Time will tell if this was a sound acquisition. Some spotty coverage, some poor passes, and some poor positioning will hopefully be corrected as we go forward. He is young and has confidence on the ball. Certainly he improved as the year progressed. Let’s hope his ceiling is much higher next year.

David Milinkovic has obviously fallen out of favour with his manager and is on his way out. Inconsistent and spotty play were never overshadowed by confident ball movement. Unfortunately, as the club had already triggered his acquisition from Hull City, the club will need to pay Hull City $100,000 to terminate his position with the Caps. In turn, that fee will count against our salary cap limit for next year. At this point I’ll leave it to you to decide if that was a sound management decision from our FO. 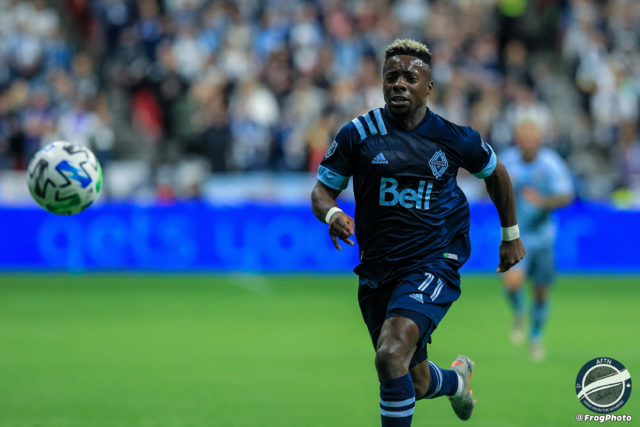 Cristian Dajome’s stock went up as the year moved along and his family moved ‘closer’. He brought pace and a terrific work ethic. However, he seemed to suffer the same over shot of adrenaline as Russell Teibert seems to get whenever a shot came into view. Consistent production and effectiveness remain an issue. He is clearly not a game breaker. He is however a worthy bench replacement.

Leonard Owusu showed us flashes of fine defensive work and every once in a while seemed to find his passing range. Again, he’s a worthy bench replacement.

Janio Bikel seemed to find his feet over time and shows some good confidence on the ball. Every once in a while too, he can find his passing form. More consistency is needed.

Ryan Raposo, like Theo Bair, needs some seasoning. The jury is still out on this young draft pick. Whether they can both find those needed minutes with the first team or both could benefit from a loan spell will remain as questions for next year. I think Bair’s work ethic needs a boost too. He seems to have bought into the notion that forwards should float until they really need to move when they have the ball at their feet.

Cristian Gutierrez shows poise and promise. More experience will likely round him into a future consistent starter. He’s young and likely has a high ceiling.

Three goalkeepers in camp makes no sense. Either Thomas Hasal needs a loan to get some more minutes to work on his distribution and ball skills or Evan Bush’s salary needs to be traded away. I think if I had to decide now, I’d try to dump Bush’s salary, but that may not be possible. Bush could well end up as our starter next year. It’ll be interesting to see how the goalkeeping minutes get shared going forward.

The midfield remains a tragic wasteland. From the present roster, only Janio Bikel holds any hope as a starter next year. Russell Teibert isn’t up to MLS 3.0 and Michael Baldisimo shows great promise for the future after some more seasoning. Two midfielders who can unlock defences with pace and through balls are, as always, a huge need in Capsland.

Finally, we come to Lucas Cavallini. I had high hopes for him. He came with much promise and is Canadian to boot. As we saw, he isn’t going to beat any defender on the dribble. He does know where the net is, but overall I found him underwhelming. He lacks pace and is given to poorly timed and ill thought out tackles. Unless he develops some better thinking about those rash challenges, he’s going to continue to hurt his team with too many red and yellow cards. He needs much better service from the midfield than he has been getting. Hopefully, better service next year will make him more of a threat.

The bottom line is that this club is in desperate need of at least a half a dozen fresh faces next year. Will the Whitecaps address the obvious shortfalls in the off season? If the past is any indication of what we can expect, the simple answer is no. Have Axel and Marc learned that the MLS improves significantly each year? Will they continue to fill holes with players who would have been satisfactory three years ago? Only time will answer these key questions.

The annual year end media interviews were not promising in this connection. Both Axel Schuster and Marc Dos Santos stated that the goal of a playoff berth was only just missed and that the improvement achieved over the course of the year was enough to convince them that they are on the right track. No changes in the coaching staff can be expected and only a few personnel changes should be expected. A left winger, an attacking midfielder, and a forward are the likely new players on the horizon.

Frankly, I think these few planned changes are simply not enough to make the Whitecaps a top third team. As most other teams continue to improve each year, we will, once again, be left in the dust. It also means that we can expect Jake Nerwinski to continue at right back, Fredy Montero to return (on a reduced salary?), at least one of Theo Bair and Tosaint Rcketts to return, and at least one or two of Russell Teibert, Leonard Owusu, and Janio Bikel to remain starters in the midfield.

Remember that the club has indicated its desire to aim to sign young designated players. By definition then these young players may need a year or two to acclimatize to the MLS and reach enough of a ceiling to contribute significantly.

At the year end presser, Schuster, Teibert and Dos Santos stated that the team now has the core and the foundation to do well in the playoffs and that we aren’t that far away from being a threat. I think that this is willful blindness at best and fully delusional at worst. I hope I’m wrong.

Feel free to chime in below with your thoughts on improvements for next year.