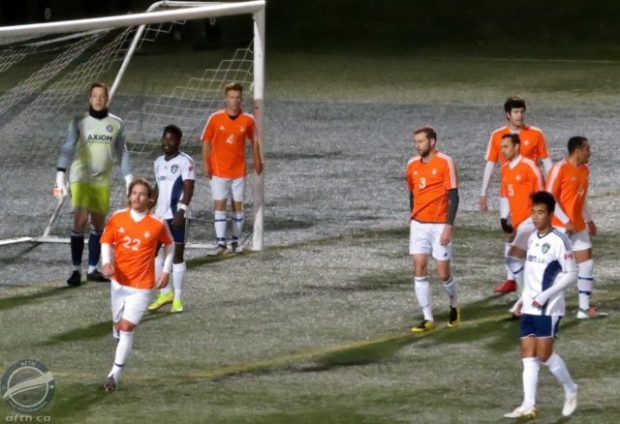 The first round group stages of the Vancouver Metro Soccer League’s (VMSL) William Azzi Premier Cohort Cup wrapped up this past weekend, and the final matches produced a couple of surprises and some drama.

With all three group winners having booked their place in the final four by the end of the week four action, the fourth and final spot for the Premier semi-finals went right down to the wire, with several teams still in the mix.

In the end it went to Club Inter EDC Burnaby, who headed to Newton on Friday night and came away with a massive 2-0 win over Group A winners BB5 United thanks to goals from Alex Marrello and Andres Rodriguez.

The other Group A action saw Westside run out 5-0 winners over Rino’s VSC at Trillium on Saturday afternoon.

BB5’s slip, saw Group B winners MAFC Tigers Vancouver become the only team to finish the group games with a 100% record, demolishing SFC Pegasus 6-1 at Newton on Friday evening.

Farivar Torabi started the rout just three minutes in when he pounced on a sloppy passback to fire home the opener. Tigers made it two in the 10th minute, before Erik Edwardson added a third three minutes before half time, taking a pass from Torabi before sidestepping a Pegasus defender and firing home.

The Tigers continued their dominance at the start of the second half and added to their tally in the 53rd minute before Torabi grabbed his second of the game, and his eighth of the season, in the 63rd minute when he was played in, ran in on goal, and tucked away the Tigers’ fifth.

The Horsemen pulled one back three minutes later through a nice finish from Gurmaan Jhaj, before the Tigers rounded off the scoring with six minutes remaining.

You can see the full game on You Tube on the video below:

Croatia saw off NVFC Norvan 3-2 at Burnaby Lake on Friday night in the other Group B game. David Malamura, David Zaharija, and Joshua Caldwell were on target for Croatia, with Lucas Borejszo and Anthony Paiero on the scoresheet for Norvan.

In Group C, West Van still fancied their chances of making the semi-finals when they headed to Thunderbird Stadium to take on group winners VUFC Hibernian.

Two goals in a minute from Aidan Izadi put the Amblesiders in the driving seat in the 34th and 35th minutes, and when Paul Kelly made it 3-0 three minutes later they must have fancied their chances of progressing.

Hibernian came storming back in a second half primarily played in the West Van half of the pitch, but it took them until the 80th minute to find a breakthrough when Daniel Kaiser fired home his first of the season. Victory Shumbusho then made it very interesting when he reduced the deficit to one with three minutes remaining, grabbing his league leading ninth of the season in the process.

But they weren’t to find another and West Van held on for the 3-2 victory.

You can see our highlights from the match below:

That win moved West Van to 11 points, two behind Hibernian, but they were to miss out on the semis by a point.

The other Group C game last weekend saw BCT Rovers Hurricanes come away with a 2-0 win at Burnaby Selects White Eagles at Empire on Friday night thanks to a brace from Aryan Chauhan.

All of those results leave the final Premier group standings as follows: 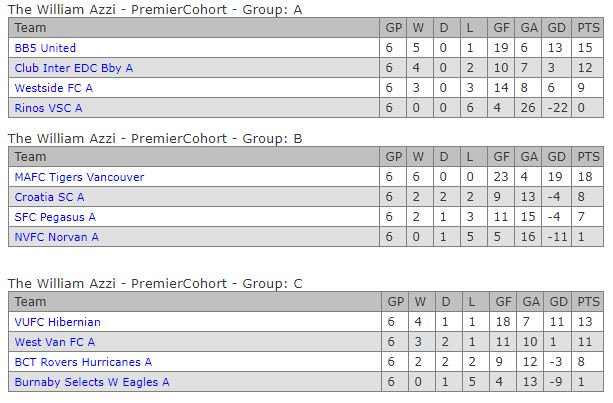 With this weekend already a scheduled free week, BC’s latest Covid restrictions have seen the semi-finals pushed back a further week now and will take place on November 27th and 28th, with BB5 United hosting VUFC Hibernian at Newton on the Friday and MAFC Tigers hosting Club Inter EDC Burnaby at Burnaby Lake on the Saturday.