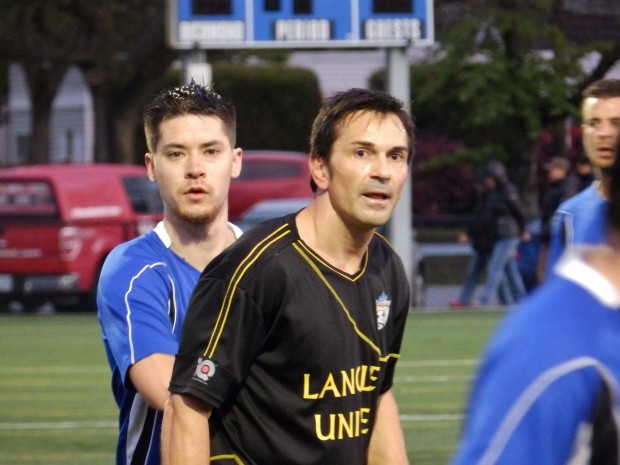 It was quarter final time in the BC Provincial Cups this past weekend and there was some fantastic action served up for fans of local soccer.

With the semi final match-ups now all set for this coming weekend, it’s still wide open as to who will be lifting the A Cup and B Cup in Langley on May 10th.

AFTN was at one quarter final match in each competition and we bring you our round-up of the weekend’s results along with some video from the entertaining B Cup game between Richmond Athletics and Langley Utd Sparta.

The action in the A Cup kicked off in Surrey on a wet Friday night with Steve attending AFTN’s featured match of the round (and providing the report below) in the all VMSL battle between ICST Pegasus and Inter FC. Pegasus were distant runners-up to VMSL champions West Van this season, with Inter finishing four points further back in 4th place.

Inter survived a couple of comebacks before securing a 3-2 win over Pegasus to advance to the Provincial A Cup semi-final.

It took less than ten minutes for them to open the scoring as former Whitecaps trialist, and one time FC Utrecht player, Jacob Lensky converted on an early chance. Pegasus would reply before the half and even the score when former PDL Whitecap Reynold Stewart converted a cross into the box with a volley past Inter keeper Andrew Fink.

Inter re-took the lead soon after the break when Sebastian Crema took a pass into the box and chipped the ball over Pegasus keeper Amarjit Dhinsa. The lead only lasted a few minutes as Chetan Jhooty replied for Pegasus, collecting the ball, after firing a free kick into the wall, and sending it inside the far post.

With only minutes remaining, Inter grabbed the winner off a corner, with Colin Streckmann heading the ball into the net to send the VMSL side to the next round.

Both semi-finals will now take place on Saturday, so if you’re not heading down to Portland to cheer on the ‘Caps, try and get yourself along to one and support local soccer.

Inter’s reward for their win over Pegasus is a home tie against FVSL Premier Champions North Delta Lions, who battled to a 3-2 extra time win over VISL side Bays United in their quarter final tie. The game kicks off at 4pm at Memorial South Park in Vancouver.

The other semi final kicks off at 3pm at Burnaby Lake West, with 8th placed VMSL side EDC Burnaby taking on island Champions Cowichan FC.

EDC Burnaby earned their spot with comprehensive 4-1 win at fellow VMSL side Richmond Hibernians, with Mohammed Habib grabbing a hat-trick and Richmond going down to ten men while trailing 2-1.

Cowichan saw off VMSL’s Langley FC Hurricanes 2-0 in Ladysmith on Sunday. Leading by a 9th minute goal, the islanders saw their opponents reduced to ten men when Langley’s goalkeeper was sent off with 20 minutes remaining and added a second late on for the win.

AFTN’s featured B Cup match of the round also took place on Friday evening, with Michael heading out to Minoru Park as Richmond Athletics hosted Langley Utd Sparta in a battle of champions in Keith Millar Provincial B Cup quarter final action.

Richmond Athletics have had a banner year being crowned RASA Premier Division champs and claiming both the League and Challenge Cups, but their stellar season came to a sudden end with a 4-1 loss to FVSL Division 2 champs and President Cup winners, Langley Utd Sparta.

It had been a close match throughout the 90 minutes, with Richmond having the better chances to win it but neither side were able to find the back of the net in normal time. Tied at 0-0, the match was turned on it’s head with Langley hitting four unanswered goals in the first half of extra time, with Richmond’s consolation coming with almost the last kick of the game.

Possession was pretty equal in the first half, but Richmond came the closest to opening the scoring in the 24th minute when Brad Caldwell shot his goalbound shot deflected for a corner and Simon Plath saw his shot off the resultant kick headed off the line.

Richmond’s John Lawrence was played in for a one-on-one with Langley keeper Lance Verhoeff eight minutes later, but the goalie was quick off his line to block the danger.

Both sides had half chances in the second half, with the best being when Richmond’s Mike Henniger shot straight at the Langley keeper with 15 minutes remaining when in a good position 12 yards out.

Langley pushed hard in the closing minutes and Mike Peters shot over with four minutes of normal time left. Richmond responded with a Cameron Burr floated free kick from just inside in their half, which crashed off the crossbar with Verhoeff scrambling.

Sparta had a chance to win it in the 90th minute when Nico Versevelt was played in but Athletics keeper Rhys Verde Rios was out quick to smother the ball at the feet of the Langley player.

So into a crazy period of extra time we went and after the closeness of what went before, from out of nowhere, Langley killed the game off in clinical fashion with four goals in the first 12 minutes of the first half.

Versevelt made amends for not finishing things off in regulation when he grabbed the game’s opening goal in the 92nd minute, racing in on goal and scoring off the post.

With Richmond pushing forward for the equaliser, and leaving themselves short at the back, Langley scored three goals in a four minute spell to make it game over.

Lee Ellis made it 2-0 in the 99th minute when Peters was played in and a Verde Rios came out to narrow the angle, the striker played the ball across to Ellis who slotted home into an empty net.

Peters himself then made it three a minute later after some fancy footwork from Riley Dornian, who picked the ball up on the sideline, cut inside and went past three Richmond defenders before playing the ball in to the near post for Peters to slip it past the Richmond keeper from two yards out.

It was 4-0 in the 102nd minutes as Richmond went gung ho and were caught on the break and Peters got on to a long ball forward and outpaced the home defence and easily chipped the ball over the diving Verde Rios.

Richmond pushed for some consolation and had some half chances before getting their reward in the 120th minute with a looping 40 yard golazo by Chris Rowley.

You can see video of three of Langley’s goals (second, third and fourth), and some other chances from both teams, in the video below [note – we’re not properly filming these games, it’s just a case of switching our point and shoot camera on at certain times and hoping for the best, hence the dodgy quality! Also, the battery in our main camera died which is the why the picture quality in extra time takes a dip! Hopefully you enjoy the action anyway].

Langley’s reward is a trip to the island on Sunday to face VISL Division 3B side Port Alberni Athletics, who shocked BMSA champions Persia FC 1-0 in their quarter final match-up.

The other semi-final will be between VMSL double winners Guildford FC, who ran away unbeaten with the Division 2A title and the Division 2 Cup this season, and RASA side Jugadores CF. Guildford headed to the island and beat Saanich Fusion Campus Honda 5-2 in their quarter final, while Jugadores beat the team that finished runners-up to Guildford, Meraloma FC, 2-0.

A Guildford v Langley Utd Sparta final certainly looks like it would be a tasty battle, so we’re hoping for that.

We’re not sure if we’ll have anyone out at any games this weekend due to the Portland trip, but we’ll bring you full details of all the semi-final action next week.

You can find the full schedule, venues and kick-off times on BC Soccer’s website HERE.