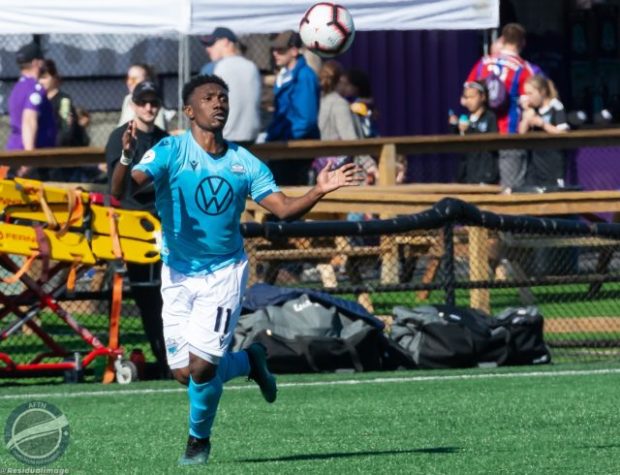 Akeem Garcia had a strong first Canadian Premier League season in 2019 with a HFX Wanderers side that struggled at times over the course of the year.

Garcia led the Wanderers scoring with seven goals from 24 appearances in league action, adding another one in the Canadian Championship, and was one of only six players brought back by head coach Stephen Hart for the club’s sophomore campaign.

Fast forward 11 months and the Trinidad and Tobago forward is on the verge of winning a CPL championship, the Golden Boot title, and has been nominated as the League’s Player of the Year after a standout campaign at The Island Games.

“When you’re playing, you have to always aim for the heights,” Garcia said on a CPL conference call on Friday. Come Saturday afternoon, the 23-year-old may have reached the summit depending on how tomorrow’s final against Forge FC plays out. But win or lose, this has been a fantastic tournament for Garcia and his Halifax teammates.

Garcia looked a top prospect last season, but this year he’s taken his game to the next level that head coach Stephen Hart challenged him to reach, the result of a lot of hard work, some dedicated playing time, and some shrewd squad additions.

“This year, I’ve focused on one position,” Garcia revealed. “Coach has helped me in terms of positioning and how I can always be better at the position. So after training, even in training, I’ve got time to go home and look over things and see how I can be better.

As Garcia touched upon there, last season saw the striker tried out in a couple of different attacking positions. This year, the focus has been on doing what he does best. He’s thrived and developed his game as a result, becoming more and more accustomed to playing the striker role with the more minutes he gets.

“To be fair to Akeem, last season he played out of position in a number of games in order to help the team,” Hart said. “That’s just the nature of the player. He will do anything we ask of him and once we got back into this season, and we came into training camp, both of us sat down and we had a discussion.

“I told him what I was looking for from him and where he needs to improve his game, and he’s worked diligently on that. As a consequence, of course, compounded by the variety of service he can now get, from both inside the field and the wide positions, he’s done well.”

Garcia’s strong play last year saw him earn a recall into the Trinidad and Tobago national team set-up after an absence of four and a half years, earning his second and third international caps in a pair of substitute appearances in the Concacaf Nations League match against Honduras and a friendly against Venezuela in October last year.

Were the Soca Warriors staff already watching Garcia, or did Hart use his connections down there to draw attention to what the young forward was doing in Canada?

“I think it was a little bit of both,” Hart revealed. “Derek King is part of the staff down there now and he has a close tie to the club and he’s going to be keeping an eye on both Akeem and Rampy [Andre Rampersad]. So it’s a little bit of us communicating and saying, look this player is doing well. We share his qualities, we share his medical on how he’s doing, and then it’s up to them to select or not select.”

Garcia’s performance during The Island Games tournament should see him get another call soon, whenever international matches in the region do finally get back to happening. And whenever that call does come, Garcia is excited to accept it.

“We haven’t spoken any time as yet,” Garcia revealed when asked if T&T head coach Paul Fenwick had been in touch with him during the tournament. “But I know the eyes are looking back home in Trinidad. The games are showing and people are watching. It’s always a privilege and honour to play for your country.