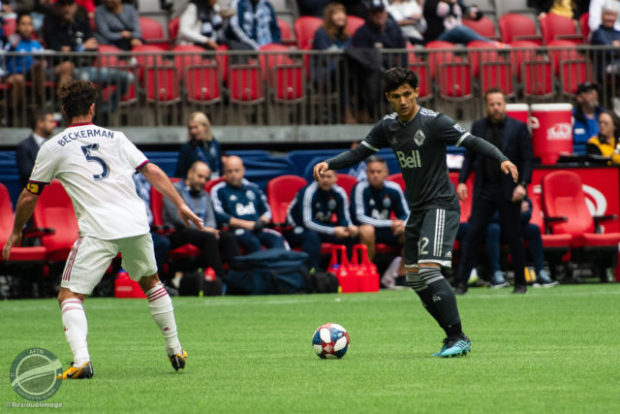 The Whitecaps played their fourth home match of the season on Wednesday, and unfortunately for them that will more than likely be it for the year. Border restrictions mean that the idea of MLS squads being given free rein to hop back and forth between countries is laughable, so the three Canadian clubs will become nomads, moving around the US for the next couple of months.

The ‘Caps at least sent BC Place off in style, with a 3-1 victory over Montreal that exacted some measure of revenge and booked Toronto FC a place in the Canadian Championship Final. Honestly, it was some of the best soccer the ‘Caps have played all season: they were comfortable on the ball, created a bunch of scoring chances and – wait, you’re telling me they were up a man the whole time? Oh, that explains it.
Suddenly, Marc Dos Santos is faced with some interesting line-up decisions. Does Cavallini start? You’d have to assume he does, but you surely can’t bench Montero after his latest performance, so that would mean moving back to more of a 4-4-2 when the 4-2-3-1 worked well on Wednesday. You’d assume Theo Bair would be the forward to make way, but the 21-year-old did well in the two matches against Montreal, bagging his first goal of the season last weekend.

In the midfield, Janio Bikel went 45 minutes in just his second appearance of the season after recovering from an annoyingly long abductor injury. Does he start again Saturday? Surely Michael Baldisimo will slide back into the starting XI? Will that put Leonard Owusu (who interestingly played much further up the field Wednesday and got an assist) on the bench? Will Dos Santos ever not play Russell Teibert, who has played all but nine minutes this season?

At the back, Andy Rose was left out Wednesday after starting six straight matches in which he was available, leaving Derek Cornelius and Ranko Veselinović in the middle. Does that remain unchanged this weekend? Is Érik Godoy going to be a centre-back or a right-back? Is Jasser Khmiri still alive? Well yes, but he is injured. Again. Or still. It’s getting hard to remember.

Another big question looms at left-back. Cristián Gutiérrez made his second start (and first 90-minute appearance) on Wednesday, and acquitted himself very well, making three tackles and six interceptions. When Ali Adnan came on late he did so as a winger, might Dos Santos start him there on the weekend? Otherwise he’ll either be benching the Iraqi DP two matches in a row, or benching someone who had a great performance last time out.

Thomas Hasal will start in goal. 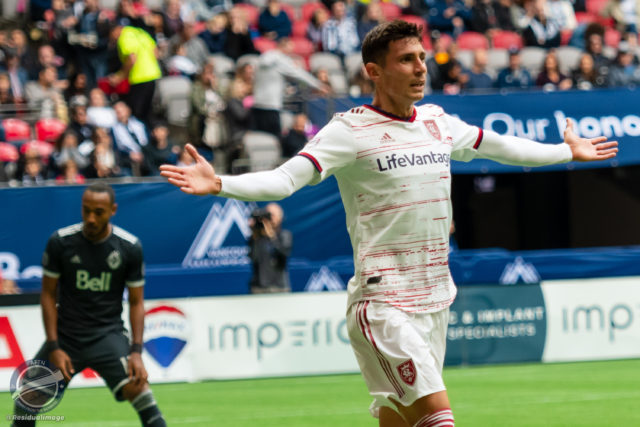 Looking at the ‘Caps’ gracious hosts, Real Salt Lake are coming off a very topsy-turvy week. They began it by losing 4-0 to Minnesota on the road, returned home to beat LAFC 3-0, and then lost 5-0 at home to Colorado. That win over LAFC was actually the lowest-scoring match they’ve been a part of since returning from Orlando, as their other five have all seen at least four goals scored (13 for, 16 against).

Damir Kreilach is their team-leader in goals with five, while Corey Baird has provided two goals and a team-high four assists. RSL have just one player out: midfielder Tate Schmitt, who has a knee injury but only plays sporadically anyway. The ‘Caps should have their full squad available, which has been quite the rarity this season.

RSL is currently tied with Houston for the final playoff spot in the West, just two points ahead of the Whitecaps. The ‘Caps have the chance to potentially leapfrog ahead of three teams with a win, though this time I won’t mention how long it’s been since they had back-to-back wins. It has been a while. But I didn’t say anything.