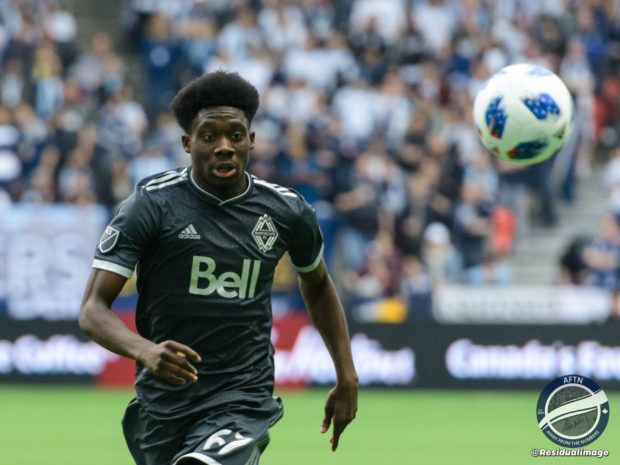 Alphonso Davies gets a lot of attention.

We’re not just talking about media pundits enthusiastically waxing lyrical about his skill and potential, understandably that’s ramped up again after the start he’s had to the season, but on the pitch he’s getting some unwelcome attention, again albeit understandably.

Everyone in MLS knows not only what a talent the 17-year-old is, but also the danger he can cause them. The result is trying to negate that – by any means necessary. Davies has been on the end of a couple of tough tackles so far this season and a couple of flying elbows in the preseason.

You feel there’s going to be a lot more of that as the year goes on, but like most things since turning pro three seasons ago, none of this fazes Davies.

“I’m not worried, it happens,” Davies told AFTN. “Players get hit. Players attack other players. I’m not worried. I just go out there and try to play my game. Try to do what I have to do. I try not to get myself involved. Last time I tried and got myself involved, I got myself sent off against Jamaica. I try to keep myself out of that as much as possible.”

That Jamaica game, a friendly before the Gold Cup, was certainly a prime example of a team seeing the threat Davies poses and trying to get under his skin. A petulant kick out after a bad tackle led to Davies seeing red, but as he notes, it also saw him realizing he can’t react like that, no matter what the provocation.

It was one of the key learning moments in the Davies’ fledgling career and if opponents think they’ll get him to react the same way again, he feels they’re going to be disappointed. It certainly hasn’t stopped them from trying, however.

Davies has suffered eight fouls in his five league appearances this season. That was a figure that surprised me a little, I have to say, as it felt like more and is behind team leader in that category Kei Kamara. Four of those came in the match in Atlanta, an experienced side with players that know how to deal with an opponent as tricky as Davies.

Apart from one tackle in the LA game that saw Davies floored, it’s not been too rough on him in the first five games of the season, although he certainly has attracted attention of his opponents. I certainly don’t expect that to be the case as the season wears on, with games like the Atlanta one likely to be more of the norm. 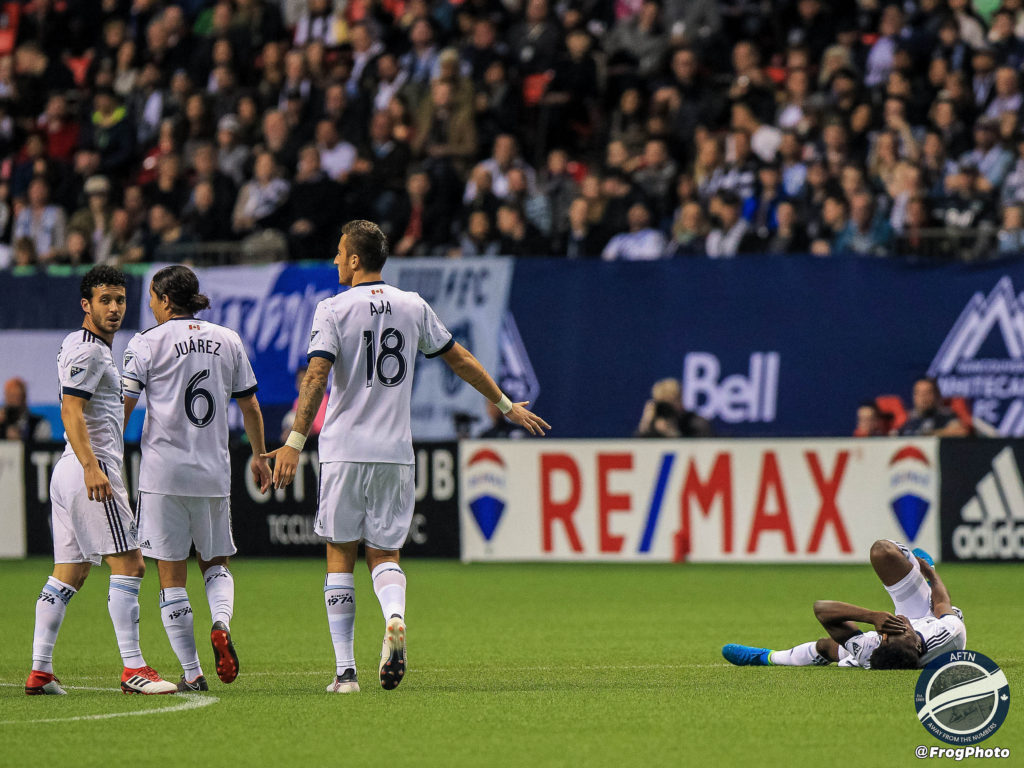 That was certainly the case during the preseason when Las Vegas Lights defender Marcelo Alatorre was sent off for a flying elbow and the Galaxy’s Servando Carrasco could have been for a similar one a week later.

That Vegas incident saw Kei Kamara quickly jump in to protect the young player he has taken under his wing. There was a lot of shoving, the benches got in to it, Davies was fine, and so was Kamara.

“I feel sometimes a player or some teams want to set a tone when they do that to other players,” Kamara told AFTN. “But it shows respect. It shows that they respect that player. That that player has something, so it’s about shutting them down early and maybe that might set a tone to not have that player produce as well as they’re going to do.”

And while it’s not ideal for Kamara, or any of the other Whitecap to jump into a situation like that and risk a red card of their own, Kamara wanted to make it clear that all of the ‘Caps players have the young phenom’s back.

“Being there when those things happen is us showing each other that we have each others back,” Kamara added. “And definitely for him, Phonzie. As a young player we want to make him feel strong. Not just by himself but together with us, that he feels definitely stronger.”

Carl Robinson fully expects Davies to garner the wrong sort of attention from opponents. He’s been in the game long enough to know it can be an effective way to deal with such a talent, and as a tough tackling midfielder in his own playing days, he wasn’t averse to a few crunchers on opponents over the years.

It’s all just part of the game, but he just wants to make sure that Davies gets the same protection as some of the other top talents in the league.

“Am I worried [that he’ll be targeted]?,” Robinson pondered. “Possibly. Will I be surprised if they do that? No, because I know they will. But then you’re just relying on the key officials to look after these players. That’s what they do to the Designated Players in this league, and rightly so.

“Hopefully they do it to the key personnel that we have. The attacking, exciting players that we have like Yordy {Reyna], Phonzie, and Cristian Techera, Bernie [Ibini], Brek Shea, I could go on and on. It’s important whoever you play, you want to see the best players on the field, the key players on the field, so I’m sure there will be a number of experienced players trying to get in the head of the young boy. But trust me on this. His mentality is tough as nails, so he’ll be ok.”