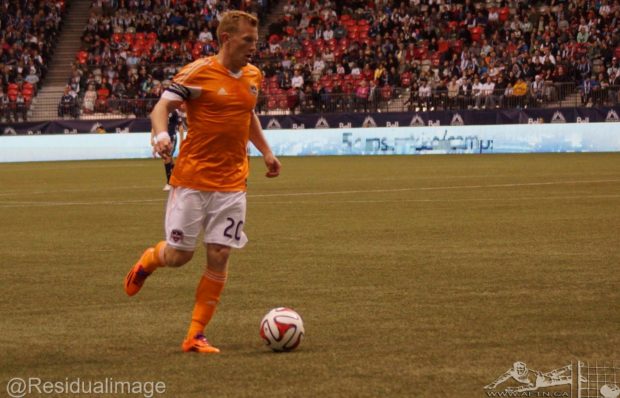 We’ve always felt it’s hard to grow MLS in Canada when so few of the out of market games are shown. A lot of people know something about the teams but often not so much the players and some of their stories. So we thought we’d remedy that a little with our new series “Around The League”, where we’ll chat with some of the more interesting and often lesser known players from the team that Whitecaps meet in MLS action. Kicking off the new series, we chat with Houston Dynamo’s Andrew Driver.

A number of UK players have headed over to Major League Soccer over the years. Some big names (Beckham, Keane, Miller, Defoe), some not so much (our own Matt Watson for example).

A lot of them have struggled to adapt to the League for whatever reasons and/or struggle to perform. Many head home quicker than they had probably hoped. The Scottish pair of Kris Boyd and Barry Robson instantly spring to mind.

The American dream perhaps not being all they expected it to be cracked up to be.

You often find the players that stick best are the lower level players that most people in the UK haven’t even heard of. FC Dallas’ Adam Moffat is a prime example.

I saw him playing Scottish Third Division football for Elgin City against East Fife. Never thought I’d be watching him in MLS but now he’s a five club and seven season veteran in the League.

Moffat’s former teammate at Houston, Andrew Driver, is another and he is settling into his second season in Texas after first coming to Houston on loan from Scottish Premiership side Hearts last year.

Driver went on to make 31 MLS appearances for the Dynamo last year, racking up 1906 minutes and contributing three goals and an assists. He’s played in all three of Houston’s games so far this season, starting two, the latest of which was last week’s loss in Vancouver.

Having spent his whole footballing career up to that point in Scotland, coming through the Hearts academy into the first team, how did the 26 year old midfielder find the experience of his first season in Major League Soccer?

“It’s been amazing. Obviously getting to travel around America, a new country, living in a great city like Houston, I’ve loved every minute of it.

“As you know, the standard of football is very high, so it’s been a good challenge. It’s one of the best decisions I’ve ever made to come out here.”

Driver was born in Oldham in England but moved to Edinburgh with his family at the age of 11. Despite playing internationally for both Scotland and England at youth level, he has pledged his international future to Scotland, although he is yet to earn a senior cap.

He initially played his youth football with the famous Hutchison Vale Boys Club before transferring to the Hearts academy system and signing his first pro contract with the Jambos in 2006, scoring on his home debut in the 2006/2007 season.

Driver went on to stay six and a half seasons at Tynecastle, lifting the Scottish Cup with Hearts in their 5-1 Edinburgh derby win over Hibs. With the club facing serious financial problems, a dispute with then Hearts manager Paulo Sergio towards the end of 2012 saw him hand in a transfer request and the writing was on the wall for Driver in Edinburgh.

With many options available to him, he’d previously been linked to Chelsea and FC Twente amongst others, what made him decide to move to America and MLS?

“I was at Hearts for a long, long time and the last couple of years there didn’t go great, obviously with the problems the club’s had.

“I just wanted a fresh start, to try something new, and luckily I was given the opportunity to come here and I grasped it. It’s a great decision and something, a life experience, that not many people get to have, so I’m absolutely delighted I’ve managed to do it.”

And he can’t speak highly enough of what he’s found in the league since coming over.

It started with Beckham but with big name players like Miller and Defoe heading over to MLS from Scotland and England in recent seasons, the League has garnered a lot more attention back in blighty. Does Driver feel we could be seeing the start of an influx in UK players looking to head over to North America whilst still having a lot to offer?

“I think a lot of guys would look at it if they want, but obviously it’s hard to get here with the international spots. I’ve spoke to all my friends back home and they’d love to do it. It’s just difficult to find an opportunity and luckily I found one.

Of course, as a fair skinned Scot with reddish hair, playing in the heat of Houston wouldn’t be what many would think of as the best place to call home!

“It’s hard at first but you get used to it as the year goes on. Obviously the training everyday, you can’t escape from it. It’s just stifling wherever you go. Day to day you just get used to it.

“In the end I kind of enjoy it. I don’t like the cold any more! When I was home there for a month I was desperate to get back into a bit of heat.”

Having undergone two knee surgeries in 2010 and 2011, for Driver, making the most of the experiences and opportunities presented to him are appreciated in their importance.

Many players in MLS seem loathe to play on turf, especially those that have suffered previously bad injuries, but that’s not something that even comes into play in Driver’s mind.

“No, no. I’ve played numerous games since my injuries and I’ve been fine on the artificial surface. It’s not ideal but it’s the same for both teams. I think maybe the risk of injuries is a little bit higher but that’s football. You’ve got to get on with it.

“I remember the days where, I was born in Oldham, they play on a plastic pitch. It was like concrete. We’re lucky in a way.”

Refreshingly, Driver knows it just adds to a team’s individual home field advantage. Each team has one and there’s no point in moaning about it.

“That’s just the way this league is. The variables in each game are so massive. You can go and play in the heat of Houston and then turn up in Montreal’s cold the week after, so everywhere’s different and you could complain about everything everywhere you go.”

Houston have found themselves in the Eastern Conference for the past four seasons, which is likely to change moving forward next season with the addition of the Citys of New York and Orlando.

Dominic Kinnear’s record with the Dynamo is impressive, making the playoffs in seven of the last eight seasons. Since moving to the East for the 2011 season, Houston have been losing MLS Cup finalists twice and lost out to Sporting KC in last year’s Eastern Championship game.

Houston surprised many last year and the way things have been shaping up in the East this season, they could find themselves the surprise packages once again.

With the focus on the big name rebuilding in Toronto, the MLS Cup winners in Kansas City and the hype that always goes with a Thierry Henry led New York, is there a feeling at the club that Houston can take advantage of flying under the radar a little bit with their talented side?

“I think we kind of did last year. We got to the Conference Finals. Not a lot of people had much belief in us or anything, but that’s what this team is like.

“We’ve got a group of guys, we’ve not got any, well I think we’re all stars, but you’ve not got the big marquee players. But you’ve got a team of people that will work for each other and everyone’s friends. There’s no cliques in the dressing room. It’s all a team effort.

“I think we just get on with out job. We get a little bit underrated at times but we’re usually there or thereabouts at the end of the season. So I think it’s the same mentality for us this year. We might not get any attention but we’ve just got to do our job and hopefully get back in there.”