It’s a new year and time to consolidate some thinking on what it means to be a supporter here in Vancouver.

In a league where teams are franchises and cities are markets, there is no real club except the one you make for yourself. This is a reason that I’m a part of the various supporters groups I belong to. I’ve been a Southsider since 2011 and we started the Pigeon Casuals partly to unite a bunch of people sitting high in the Southside who felt disconnected from the drums and singing that were happening way down at pitch level. We’ve all worked hard to become part of something interesting happening section 253 this coming year.

Although Vancouver Whitecaps FC is the “football club” I go and watch, the real club is the supporters’ groups with whom I can have a good time and make stuff happen. We spend our time drinking beer, watch soccer, and ad nauseum, debating every aspect of what is happening, for no other reason than it’s fun.

Over the years, these folks have become good friends and familiar faces. We’ve built a participatory culture in the Southside, something which is so rare in Vancouver, a city which seems to pride itself on performance and consumer values over participatory community. Expecting a corporate behemoth to provide this kind of culture is folly. The Whitecaps FC organization is driven by a narrow set of metrics. If something helps drive their metrics, they will support it in return, otherwise, it’s up to us to do fun things. Community is not a quantifiable return on investment. The front office really has no way to measure it and so we forge it on our own, enjoying the fruits of our efforts. Over the years I grown tired of expecting the franchise to participate with us in this work. Perhaps one day they’ll be more actively interested in co-creating the best sporting atmosphere in Vancouver. Until then, we’ll just keep doing our thing, and they’ll keep marketing it.

Many “knowledgeable soccer people” people knock me about spending my money watching the Whitecaps. The usual refrain goes that MLS is a shit quality league and why wouldn’t you watch the Premier League or La Liga? My answer to that is that I love football, and live football is an awesome experience, despite the fact that we aren’t watching Real Madrid. This is why people all over the world go to live football matches despite the fact that they support teams like East Fife, Grimsby Town, Linfield, Motagua, Bari, or Bursaspor. The football isn’t the best, but the experience beats going to a formulaic Hollywood blockbuster or watching the NHL in a quiet and half abandoned arena. I like to go to sing for the players I’ve met and communicate with on a regular basis, players who know what they mean to us. They are the ones we are supporting. In return they have given us thrills and chills, heartbreak and ecstasy, and a meaningful shared experience with tens of thousands of others who are there to will them on to win things. It is nice of MLS to hire them for us.

Major League Soccer has co-opted supporter culture for it’s own marketing ends, even as it really doesn’t seem to understand it. Fortunately, here in the Lower Mainland there are other ways you can come to understand what it means to be a supporter, a real supporter, where your support makes a difference not just to paid professionals but to communities.

Here at AFTN we cover the local leagues, including the Vancouver Men’s Soccer League (VMSL) and the Vancouver Island Soccer League (VISL), as well as the local university teams. These leagues are made up of real clubs that you can join and be a part of. They have promotion and relegation. The players are your neighbours. Some have played professionally in other places, and others are on their way to careers in the game, perhaps playing for Canada at some point. If you care about the future of Canadian soccer, its good that you care about these clubs too. Getting involved with them can make a real difference to the future of the game in this country and it matters to local communities.

Between the rarefied air of the commercial leagues and the down to earth local clubs there lies the exciting experiments of the PDL and the potential that is growing around the Canadian Premier League. When TSS Rovers began with a commitment to play only Canadian players it captured my imagination. It was a call to arms for anyone that ever wanted to do something to change the way Canadian footballing talent is developed. If you want to put your money where your mouth is, a season’s ticket to Rovers matches is one concrete and tangible way to do it. 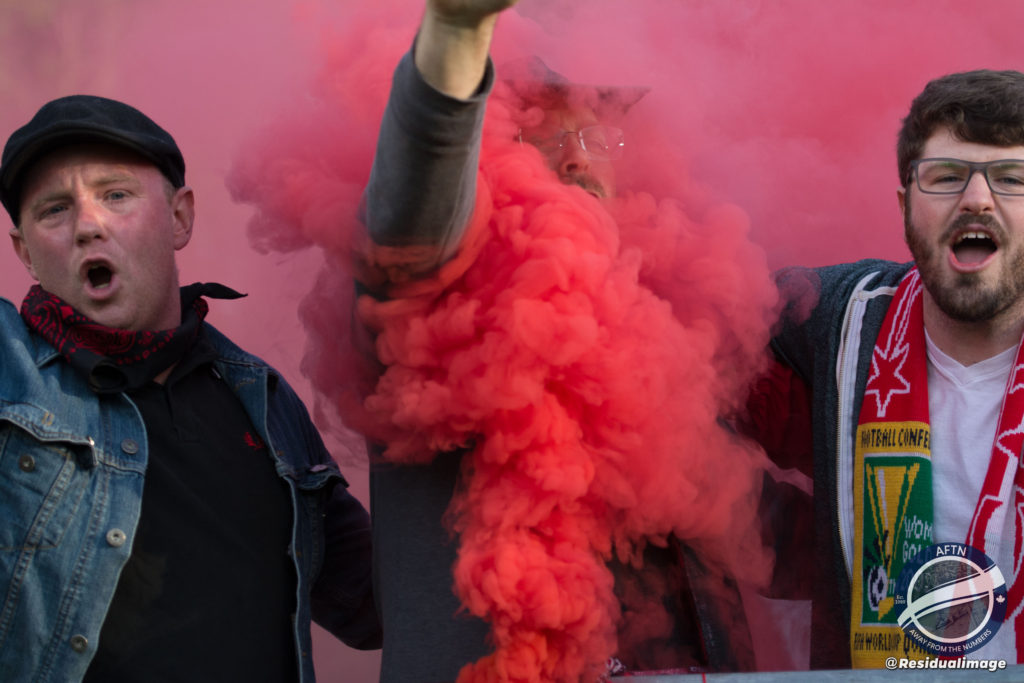 From the beginning the organization chose to run as much as a club as they could, to provide the raw materials for supporter culture to emerge and to help it along if it took off. A small group of local football aficionados came together, secured the @Swanguardians twitter handle and waited to see what would happen. Amongst us were fans of pyro, song makers, banner painters, and folks who remembered what it was like to stand in the Southside at Swangard Stadium supporting local football. We were determined not to replicate Southside culture at the Rovers’ games, and so we filled our songbook with new chants, several of them based on Tragically Hip songs and Canadian folk music. We had a benefactor buy flares and smoke to contribute to the atmosphere. We had tailgates and sang proud and loud on Friday nights last summer, quickly developing a rivalry with more established supporters groups in Eugene, Calgary, and Victoria. Swangard became as much as a fortress as we could make it and we only lost one home game there all season. We even named our own Player of the Year, and it was easy to pick Andrew Hicks, our keeper, who downed a beer with us after every match.

The Rovers recognized the value of this relationship and made the deal a real one. I was asked to join the advisory board (and full disclosure, I accepted the invitation). I joined because the culture of support is real and mutual. It’s an honest, authentic attempt to build community around an idea: improving the level of Canadian soccer.

It is not hard to create a little bit of community. Look no further than the supporters groups that have sprung up despite the fact that the Canadian Premier League has been quiet since announcing its intention to form a couple of years ago. Recently, the Barton Street Battalion of Hamilton posted tweets that talked about how that group was busy last year raising money for good local causes, all the while doing what they can to support the establishment of a team in Hamilton. They discovered the real secret of what it means to be a supporter’s group.

In December, a national contest was held to determine who had the best scarf from across the Canadian supporters groups. The Halifax Wanderers SG beat out TSS Rovers in the final. The MLS Supporters groups were hardly in the running. Fierce battles raged between PDL and CPL groups. The longing for active participation in a community is given its full expression in this remarkable phenomenon. If the Canadian Premier League is to be sustainable, it will need to have a close relationship with these small but fiercely committed groups, whose loyalty is formed around the common purpose of a better future for soccer in Canada.

Supporter culture around here is unique in so many ways. But it comes down to what my fellow AFTNer, Zachary Meisenheimer, always says – it’s about doing something meaningful. Worldwide, supporter culture is something that comes from the ground up. You don’t consume it, you create it. If it’s meaningful support you should be able to identify that which you are supporting, and you should be able to say how your support makes a difference. At BC Place I know our support matters at the very least to the Whitecaps players. At Swangard, it’s clear that it matters to the entire TSS Rovers organization and the dream. On Bowen Island, supporting my local team makes my community a better place to live. It helps us have a local co-ed recreational league, and it helps knit together positive relationships between young people and the adults who look out for them.

Let’s do more of all that this year.

Happy New Year. See you in the stands.