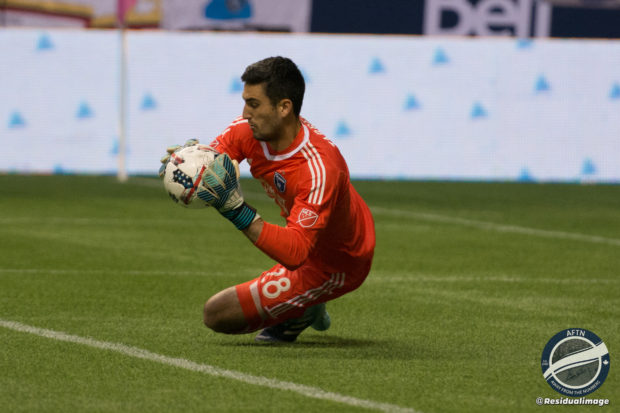 This week could have been very different for Vancouver Whitecaps. A win against San Jose or a win against Portland, and the ‘Caps would be looking at a week of rest and an upcoming trip to Houston or Kansas City.

Instead they face off against one of the teams that thwarted their first Western Conference regular season title hopes, in a game with everything on the line.

It’s naturally hard not to look back at the San Jose Earthquakes match at BC Place nine days ago and not see it as a completely wasted opportunity. You can look at a number of factors as to why Vancouver couldn’t get the job done, many of them of their own making, but you also need to give credit to the man between the sticks for the Earthquakes that night, Andrew Tarbell.

Tarbell made five “crucial saves” during the match, in the words of San Jose head coach Chris Leitch after the game. Playing with a “just don’t let the ball go in” mantra, Tarbell earned the Earthquakes what proved to be a massive point in their quest for the postseason, fending off a late Whitecaps push for a winner.

Now San Jose are in the playoffs and heading back to Vancouver in their quest for the MLS Cup. This time there has to be a winner in the match, but Tarbell feels the Quakes learned a lot about how to take on the ‘Caps last weekend and will be looking to go one better this time around.

“The locker room is a tight knit group and we’ve been battling all season. We’re going to keep doing what we’ve been doing and keep battling and be ready.”

It’s been a whirlwind few months for Tarbell.

The Quakes keeper is in his second season in MLS after being selected 8th overall in the 2016 SuperDraft. David Bingham has long been the man holding the number one jersey for San Jose. With Bingham an ever present the past two seasons, up until a few weeks ago, Tarbell’s MLS minutes had been limited to a second half substitution appearance in Columbus last August when Bingham suffered a back injury. The next game, Bingham was back in goal. 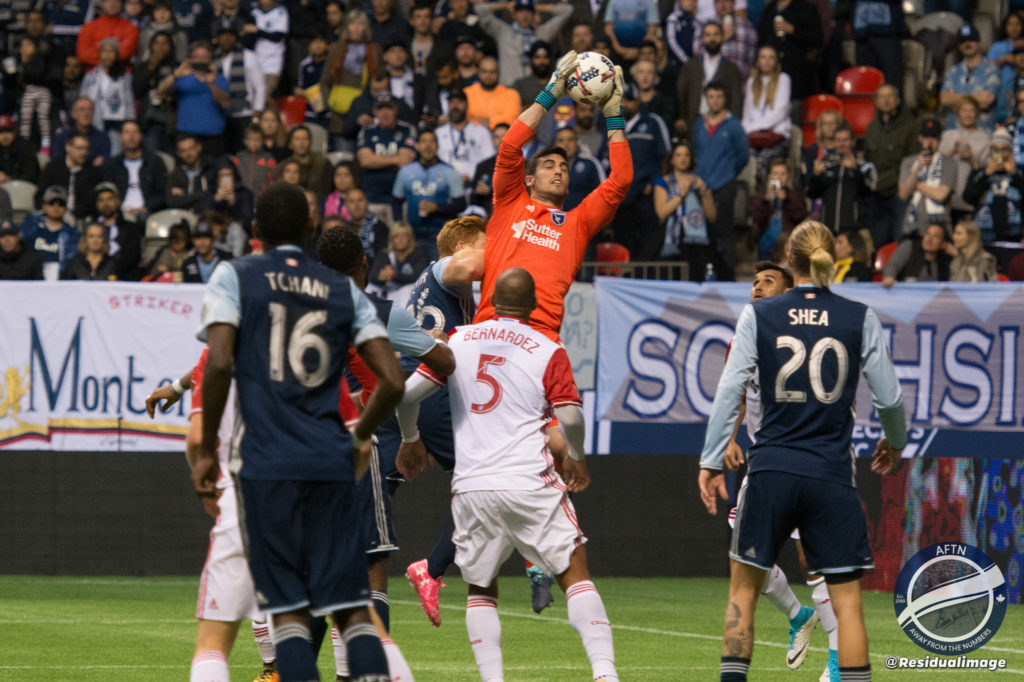 This season saw the former Clemson University standout loaned to the Quakes’ USL affiliate, Reno 1868, for a month to get some playing time. He kept one clean sheet in four appearances and credits the experience he got with the expansion side as an important chance to hone his game and make him MLS ready.

“They’ve got a great program going on down there,” Tarbell said of Reno. “I’m really happy to have gotten games with them. My first pro games were with Reno. It’s a great partnership they’ve got with the Quakes. Glad to see they’re doing well.”

With San Jose battling hard for a playoff berth, Leitch made the somewhat surprising decision to give Tarbell his first MLS start three days later in their August 12th match in Houston.

The Quakes were coming off back to back victories, with Bingham keeping a clean sheet in one of them. Tarbell’s start in Houston ended the seven year veteran’s run of 91 straight MLS starts. Bingham had had a mixed season to date. This was Tarbell’s chance to impress. He ran with it and hasn’t looked back since.

San Jose lost that match 3-0, but Tarbell put in an excellent performance. As he did in the next game against Philadelphia and the next one against Real Salt Lake. The Earthquakes didn’t win any of those three matches. It would have been easy for Leitch to make the switch back to Bingham, but he felt Tarbell, who he had a role in drafting as the club’s Technical Director, was the future of the team, with his predecessor out of contract this offseason.

Leitch kept Tarbell in there and he’s played every minute of every match since his debut. He’s made the number one spot his own and helped San Jose make the postseason for the first time since 2012.

“It just takes games,” Tarbell told us. “It takes experience as a goalkeeper. I’m just grateful for every opportunity I have to be out there and just do my best.”

Despite battling with Bingham for the starting spot, Tarbell feels he’s learned a lot from the 28-year-old in his two seasons in San Jose. Veteran goalkeeping coach Tim Hanley, who has coached three previous MLS Goalkeepers of the Year, has also really helped bring his game on. He also has former Whitecap Joe Cannon around to ask for advice as well.

“It’s great training with him [Bingham] and picking up on his habits and things that he does,” Tarbell told us. “It’s great to just learn from all of the staff that we have here and all of the players. Try to learn as much as I can and try and absorb all the information I can.” 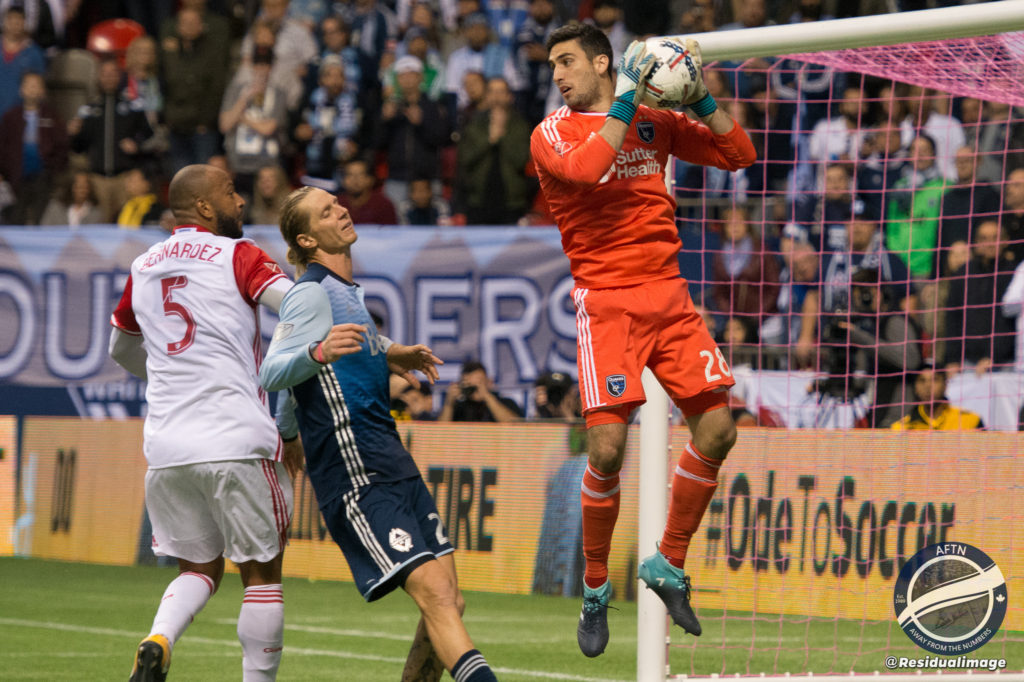 Tarbell also benefits from trying to keep a player like Chris Wondolowski at bay each training session and the US national team striker has been impressed by the ability and composure the 24-year-old Tarbell has brought to the Quakes these past two months.

“As you’ve seen, he’s kept us in there,” Wondolowski told AFTN. “There’s a lot on his shoulders because of how well he’s done. It’s great to have that confidence back there, especially when you need a goal. You can sometimes go one on one at the back because you have trust in your goalkeeper and trust in his ability. I think he’s stepped up and is continuing to grow as a player as well.”

Now the focus is firmly on the playoffs.

The Quakes couldn’t have left it much later to book their place. Marco Ureña’s dramatic winner three minutes into stoppage game gave San Jose a 3-2 win over Minnesota and a first round playoff date in Vancouver.

Of all the playoff permutations facing the ‘Caps if they didn’t finish first, the Earthquakes always felt like the best option. This is a team that’s only ever won once at BC Place and have consistently struggled in their matches up here. But you also have to feel of all of the options awaiting them, San Jose are likely pretty pleased to have ended up with Vancouver.

Last Sunday’s meeting showed the Quakes that they have the tools to trouble an albeit not fully firing Whitecaps side. Tarbell will have a big part to play in the match once again, but he’s confident that San Jose have what it takes to not only get past Vancouver, but make a run for the MLS Cup.

“We have the ability for sure [to go on a deep playoff run],” Tarbell told us. “It’s a matter of clicking and having the confidence as a team. We’re on the upswing. I can’t stress this enough just how hard this group works and we’re going to stick to that and keep going.”