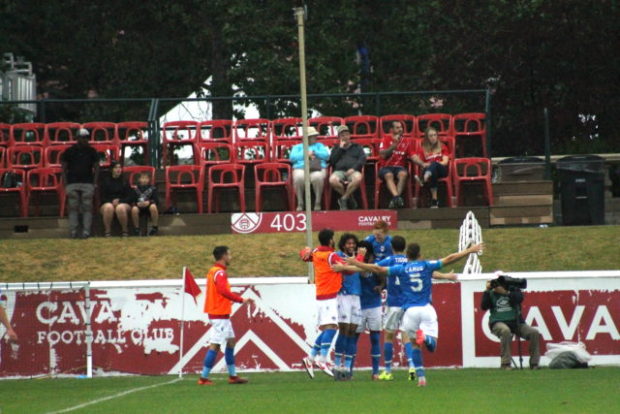 Cavalry FC’s frustrating run of results against Atlético Ottawa continued on Aug. 21, as they fell 3-0 to the capital city side at Spruce Meadows.

The Canadian Premier League (CPL) result keeps the Calgarians in fourth place in the league table, but catapults Ottawa into top spot for the time being on 38 points, four ahead of Cavalry. Sandwiched between the two, Forge FC and Pacific FC round out the current top four in the CPL table, with 35 points apiece.

“I think it’s a statement,” said Ottawa player Owen Antoniuk, who joined the CPL side on loan last month from Vancouver Whitecaps 2. “Cavalry is one of the top teams as well, so to win 3-0 away against a top, top team is a statement.”

Despite dominating all attacking categories – except the one that matters most: the score – Cavalry was outdone by Ottawa’s tactic of defending tightly and then attacking quickly in numbers upon gaining possession.

It was a strategy that rendered the visitors two second-half goals, in addition to a late tally at the end of the first half.

Showcasing their control of the match, Cavalry led 22-7 in shots and held 75 per cent of possession. Even with so much of the ball, the hosts were unable to put a shot past Atlético keeper Nathan Ingham throughout the 90 minutes.

“The only stat that counts is the scoreboard at the end of the match,” said Cavalry goalkeeper Marco Carducci during the post-game press conference. “We dominated possession and had chances early…but it’s about winning games.

“As a goalkeeper, obviously you take a lot of pride in not allowing goals and anytime you concede three, especially at home, it’s a terrible feeling. But we can’t change the result. It’s done. We have to put it behind us as soon as possible and focus on what’s next.” 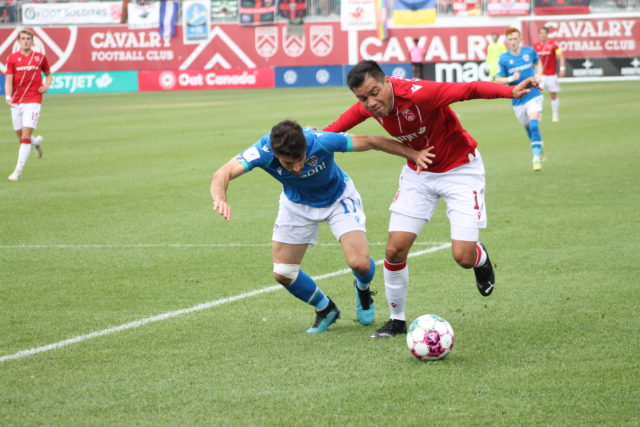 As is often the case when playing at Spruce Meadows, the hosts started the match on the front foot, frequently getting crosses and passes into the box and generating 13 shots during the first half.

Even though they only came up with three of their own shots in the opening 45 minutes, it was Ottawa that broke the deadlock with the final kick of the half. The goal came courtesy of a well-directed effort from Keven Alemán, who found space in the box and then drilled a shot into the bottom corner past an outstretched Carducci.

The two teams headed into the dressing rooms for half-time just moments later. Due to a thunder and lightning storm, the second half was delayed by more than an hour, giving both sets of coaches plenty of time to generate a game plan for the second 45 minutes.

Having experienced a similar weather delay just two weeks before against Edmonton, Antoniuk said Ottawa’s players knew how to spend the extended break.

“Eat, hydrate, relax,” he said of the lengthy hiatus. “We had such a long time and it kept going, from 15 to 30 minutes to an hour. Two weeks ago against Edmonton we had the exact same thing, so we were in that situation before.

“We were pretty calm – guys were even cracking jokes. But we knew they were going to come out guns blazing.”

And come out blazing Cavalry did, again piling on the pressure on Ottawa’s back-five in search of an equalizer. But though they boasted a hefty share of the ball once again, the Calgarians still couldn’t put a shot past Ingham in Ottawa’s goal.

Once Atlético did finally reclaim the ball, they poured men forward, channeling the style that helped lead their parent club in Madrid to La Liga titles in 2014 and 2021 and the Europa League in 2018.

“That’s kind of the Atletico DNA – sitting, getting stuck in, shifting left and right, and it was a lot of running, in the first half especially,” said Antoniuk.

“The rewards came at the end. To score three goals with that amount of possession is crazy, so we’re pretty happy about that.”

Their quick-counter-attacking style paid off again in the 79th minute, when Brian Wright finished off a successful counter by lobbing a shot over Carducci to put Atlético up 2-0.

Atlético’s third came 10 minutes later. Ollie Bassett put the result to bed with a one-timer into the net from close range, off a cross from Carl Haworth. 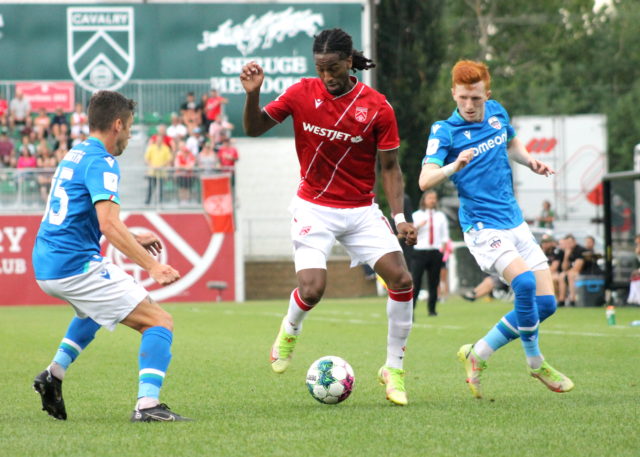 Ottawa has been a bogey team against Cavalry, having beaten the Calgarians twice this season while their other match was a 1-1 draw. Since joining the CPL in 2020, Atlético has generated an impressive 5-1-1 record overall against Cavalry.

Tommy Wheeldon Jr., Cavalry’s head coach and general manager, denied that Atlético is the thorn in his team’s side, stating in the press conference the result was a simple matter of one team executing their game plan successfully, and the other team not being able to.

“I think it comes down to finishing our chances,” he said. “We tied 1-1 with them, we had chances in the first game of the season. I’m not sure what it is. They defend very well, you’ve got to give it to them. They’ve had a couple of blow-outs – the 6-1 against Valour and the 4-0 against Forge. It happens. What they did was design a game plan that frustrated us, and they did, so credit to them.”

Now seven games out from the four-team playoffs – four of them at home – and occupying fourth spot in the CPL table, Wheeldon Jr. added the ball is still in Cavalry’s court to set themselves up well for a championship run. The team will return to the Spruce Meadows pitch on Aug. 27 to face York United.

“You’ve got to worry about yourself and the next game,” Wheeldon Jr. said. “We have to diagnose what this game was, put it to bed, watch the tape, and then focus on York. That’s all we can do.

“We’ve got four more home games out of seven and it’s up to how we do and how we respond to this.”

A few road games after that, they’ll host Ottawa again, on Sept. 24. By then, the playoff picture will really start to come more into focus. 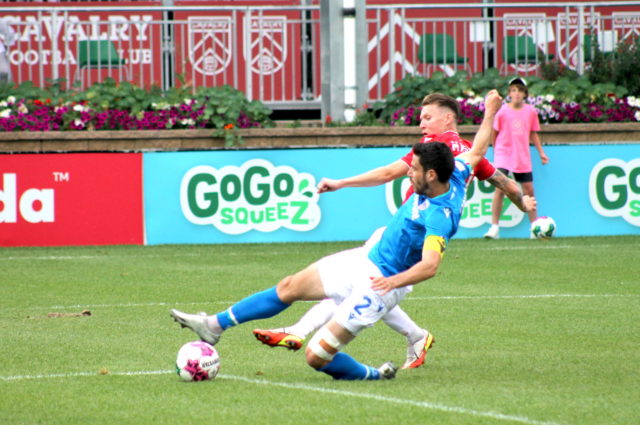